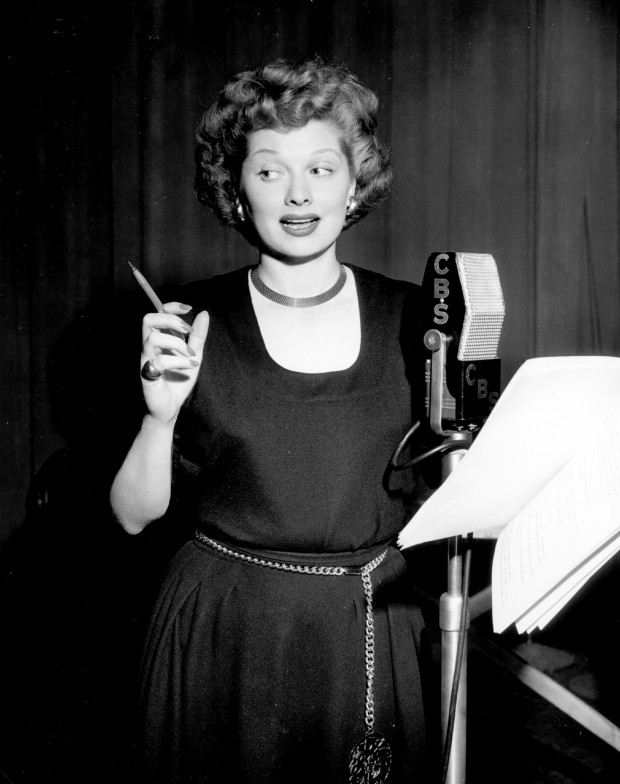 On this date in Jamestown, NY, the woman who would become virtually synonymous with television situation comedy entered this world as Lucille Désirée Ball. October 15, 1951 marked the small screen debut of I Love Lucy, a domestic comedy vehicle featuring Lucy and her real-life bandleader husband Desi Arnaz. Ostensibly a boob tube incarnation of a radio series that Ball had enjoyed success with as My Favorite Husband, I Love Lucy would become the breakout hit of the 1951-52 season and later earned iconic status as one of television’s most beloved shows. This despite the consensus from critics at the time of I Love Lucy’s premiere that the series probably wouldn’t “amount to anything.”

Growing up in Celeron, NY, Lucy had a number of family members who encouraged her acting ambitions: her grandfather Fred often took his “Lucyball” to vaudeville shows in her youth, and when her mother DeDe remarried after her husband Henry’s death (when Lucy was 3), Lucy’s new stepfather also wasn’t shy about pushing her into the footlights; he was responsible for staging many of the talent shows put on by his fellow Shriners. It was DeDe who arranged for Lucy to attend the prestigious John Murray Anderson School for the Dramatic Arts in NYC in 1927…though the faculty informed their impressionable pupil that she “had no future at all as a performer.” Lucy would have the last laugh. First, she found work as a model (achieving a little fame as the Chesterfield Cigarette Girl). Next, after adopting the moniker “Diane Belmont,” she started getting small parts in Broadway productions.

It wasn’t until Ball decided to migrate West to Hollywood that her career started to take off. She’d land bit roles in films like The Bowery, Blood Money, Broadway Bill, and The Whole Town’s Talking…and as one of the Goldwyn Girls worked alongside Eddie Cantor in Roman Scandals and Kid Millions. Although Lucy would appear in movie classics like Follow the Fleet and Stage Door, admittedly much of her feature film work was of a B-picture variety. She was known informally by the nickname “Queen of the B’s”…though in all fairness, there was more than one queen buzzing around in that hive.

Years after the success of I Love Lucy, many Ball biographers would lament that the motion picture studios at which she was employed often overlooked her comedic talents and chose to focus instead on her as a glamour-gal. While this is true to a certain point, it’s fascinating to look back at Lucy’s cinema resume and see just how well-schooled she became in the art of mirthmaking. While at Columbia Pictures, she took lessons from the likes of The Three Stooges (Three Little Pigskins) and Leon Errol (Perfectly Mismated), and upon being signed to RKO she continued her tutelage under Billy Gilbert (So and Sew) and Edgar Kennedy (Dummy Ache). She yukked it up with the Marx Brothers in the 1938 feature Room Service, and with Jack Oakie made two amusing films in The Affairs of Annabel and Annabel Takes a Tour. Moving to MGM in the 1940s, Lucy would work with Red Skelton and Abbott & Costello, and made a devoted friend in legend Buster Keaton. The latter may have only been employed as a gag writer after his phenomenal success in silent films, but he gave Lucy invaluable advice in the finer points of comedy.

Her exposure in motion pictures meant that she was in demand on such programs as The Campbell Playhouse, The Cavalcade of America, Command Performance, Family Theatre, G.I. Journal, Good News of 1940, The Screen Guild Theatre, The Harold Lloyd Comedy Theatre, The Lux Radio Theatre, Mail Call, The Philip Morris Playhouse, and Screen Directors’ Playhouse. Lucy’s best-remembered dramatic work was on “radio’s outstanding theatre of thrills”; she appeared on Suspense a total of six times (including the classic broadcast “Dime a Dance”)—including two performances alongside her husband, Desi Arnaz. The stability of performing on radio had appeal for Ball, who was experiencing problems in her marriage to Arnaz (Desi’s bandleading took him out of town often, and he had a reputation as a playboy). She suggested the idea of a radio show to her agent, Don Sharpe, and he reported back to her with what he thought was an ideal candidate: a situation comedy based on a best-selling novel entitled Mr. & Mrs. Cugat: The Record of a Happy Marriage, by Isabel Scott Rorick.

Lucy lobbied CBS Radio hard to let Desi play her husband on the new series—which had been given the title My Favorite Husband—but the network brass refused to budge, thinking that no one in the audience would buy the idea of their star being married to a Cuban entertainer…despite the fact she really was married to a Cuban entertainer. Instead, Lucy’s co-star would be dependable leading man Richard Denning. The pair debuted as Liz and George Cugat with the premiere of My Favorite Husband on July 23, 1948 (after a special “preview” on July 5…which featured Lee Bowman as Lucy’s hubby). The series enjoyed only middling success until writer-director-producer Jess Oppenheimer was brought aboard to “tweak” the show. He changed the last name of the couple to “Cooper” and made Lucy’s “Liz” character more child-like and impulsive. (Qualities that were present, by the way, in the comedienne that Oppenheimer worked for before the Husband gig—Fanny Brice’s Baby Snooks.)

Oppenheimer also introduced an older couple to act as a contrast to the Coopers: Rudolph and Iris Atterbury. The male Atterbury had appeared on the series in the beginning (he was George’s boss at the bank where they worked), but assigning the role to Gale Gordon was a stroke of comedy genius, as he was a perfect foil for Lucy’s aural shenanigans. Iris was played by Bea Benaderet, and other performers on Husband included Ruth Parrott (as Katie, the maid), Hal March, Hans Conried, Frank Nelson and Eleanor Aubrey.

When plans were made to bring My Favorite Husband to TV in the form of I Love Lucy, Ball very much wanted Gordon and Benaderet along to play the neighbors on that program, Fred and Ethel Mertz. But Benaderet was already committed to George Burns and Gracie Allen’s series, and Gordon would transition with nearly the entire cast of Our Miss Brooks for that show’s TV antics. (However, both Gale and Bea later did guest appearances on I Love Lucy.) One casting decision that would not be negotiated was Lucy’s choice for her small screen husband: she was quite fond of Richard Denning, but it was going to be Desi Arnaz or no show. This time, The Powers That Be at CBS caved…and we’re glad they did, because the rest became television history.