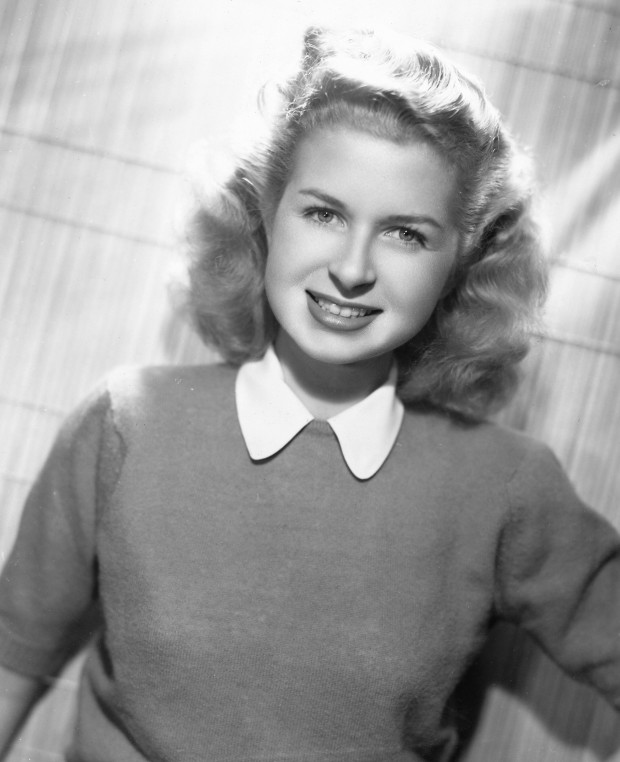 Actress Louise Erickson was born in Oakland, California in 1928. In the 1940s, Louise was one of the “go-to” thespians whenever the role of a teenage girl needed to be played on radio…and from 1943 to 1950, she would emote as “that lovable teenage girl who’s close to all our hearts” as the star of A Date with Judy.  And yet as they say in commercials: ”But, wait…there’s more!”

Moving to Hollywood with her parents at the age of seven (her father Arthur was a restaurateur) allowed young Louise to get in on radio’s ground floor with a role on a local kids’ program, Uncle Whoa Bill.  She was royalty on that show (she played a fairy princess), and Louise would later make her network debut on a broadcast of Dr. Christian.  Erickson was one of several juvenile performers on Mutual’s Dramas of Youth, and with experience on such favorites as The Cavalcade of America, she landed a plum assignment playing Mitzi—gal pal and co-conspirator of Judy Foster on A Date with Judy.  When Date premiered on June 24, 1941 as a summer replacement for The Bob Hope Show, the role of Ms. Foster was portrayed by child actress Ann Gillis. However, by the time Louise joined the show, Dellie Ellis was playing Judy.  A Date with Judy would be pressed into service to be Eddie Cantor’s replacement in the summer of 1943; Erickson got a promotion to the lead when Ellis bowed out.

A Date with Judy opened a lot of doors in radio for Louise Erickson.  Before Janet Waldo took over as bubbly Emmy Lou on The Adventures of Ozzie & Harriet, Louise played the part.  When the success of Judy inspired CBS to launch their own teenage girl comedy, Meet Corliss Archer (based on the character created by F. Hugh Herbert), Erickson appeared on that program as Corliss’ pal Mildred (with Corliss portrayed by Waldo, of course).  Louise would later play Babs, the eldest daughter of lunkheaded working stiff Chester A. Riley on The Life of Riley during that show’s run.  Other radio favorites on which Erickson worked include The Adventures of the Saint, The Alan Young Show (as Alan’s girlfriend Betty), Arch Oboler’s Plays, Cloak and Dagger, Granby’s Green Acres(as Janice), The Lady Esther Screen Guild Theatre, The Phil Harris-Alice Faye Show, and Repeat Performance.

Though A Date with Judy made Louise Erickson a radio star, it was The Great Gildersleeve that provided the actress with her most fondly remembered showcase.  In later years, Erickson reminisced about her time on the series: “Of all the programs I did on radio The Great Gildersleeve is the one that still stands up today; the writing was superb, and Hal Peary was a comedic genius.”  Louise inherited the role of Marjorie Forrester from Lurene Tuttle, who played Marjorie from 1941 to 1944.  On one broadcast, Erickson was too ill to appear and another actress, Mary Lee Robb, agreed to fill in for her.  (That “audition” allowed Robb to continue as Marjorie in the fall of 1948.)

Erickson’s steady radio work as Judy Foster would later translate to motion pictures. Louise had a small role in the 1944 musical comedy Rosie the Riveter (Carl “Alfalfa” Switzer played her brother). In Meet Miss Bobby Socks, released that same year, she received a bit more exposure as a lovesick teenager who falls head-over-heels for a bandleader (played by Bob Crosby).  (Also in 1944: Louise appeared with Gildersleeve star Hal Peary in an installment of Paramount’s “Unusual Occupations” shorts series, in a brief segment on the “making of” the show.)  Louise was snubbed when MGM decided to bring A Date with Judy to the big screen in 1948 (Jane Powell played Judy…they should have stuck with the original), and her only other movie of note is 1950’s Three Husbands…which allowed her a small-but-scene-stealing role.

The only item on Louise Erickson’s small screen resume was a guest appearance on a telecast of Hollywood Theatre Time. The August 10, 1951 installment, “Father’s Harem,” featured a few of her fellow radio veterans including Elvia Allman, Sarah Selby, and Hanley Stafford.  Perhaps she was looking for something beyond her extensive body of radio work (she did have a small role in a 1957 Broadway production of A Hole in the Head), because after her second marriage she took up writing. According to authors Charles Stumpf and Ben Ohmart, Louise accepted a job in New York City as a museum tour guide for handicapped children.