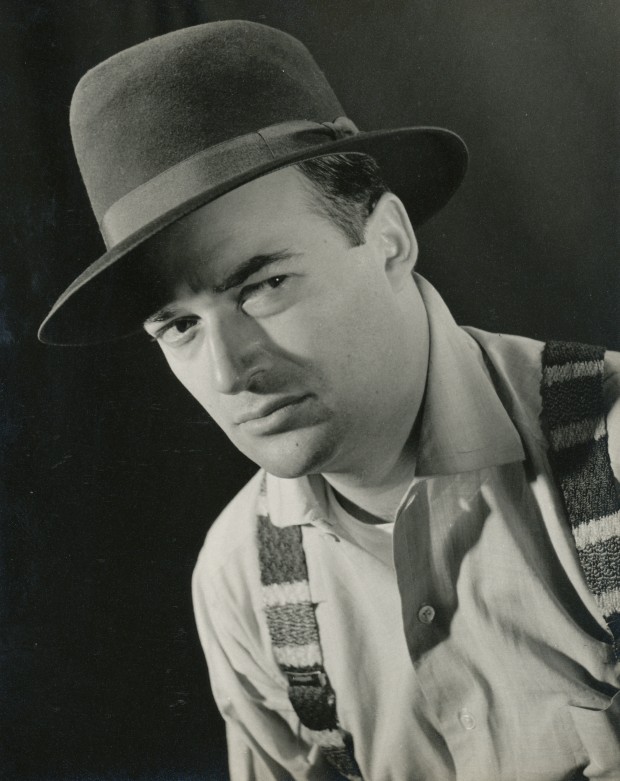 There are eight million stories in the naked city…and today we’ll highlight one of them, by celebrating the birthday of the actor who narrated those tales on one of television’s most memorable police procedurals. Before becoming the “voice” associated with the Naked City series, Lawrence Dobkin—born in NYC on this date in 1919—was a veteran of radio, stage and movies, possessing some of the most distinctive tones in any broadcast medium.

Larry began acting at an early age. In fact, he broke into radio in order to finance his studies at the Yale School of Drama (his roommate was Richard Fleischer, future film director and son of cartoon innovator Max). Dobkin’s prolificacy over the airwaves was astonishing: he emoted on many big-time broadcasts including The Adventures of Philip Marlowe, Broadway is My Beat, Doctor Christian, Jeff Regan, Investigator, Let George Do It, The Line-Up, The Man Called X, Night Beat, Richard Diamond, Private Detective, The Story of Dr. Kildare, Tales of the Texas Rangers and Yours Truly, Johnny Dollar. Dobkin also made the rounds of the prestigious anthology programs—notably on Escape, where he was practically a regular—but also on The CBS Radio Workshop, Family Theatre, The First Nighter Program, The Hallmark Hall of Fame, The Lux Radio Theatre, The NBC University Theatre, Romance, Suspense and The Whistler.

Lawrence Dobkin was one of five actors to play the legendary Ellery Queen on radio; he solved cases as the super sleuth over ABC from 1947 to 1948. Dobkin was also a regular on The Adventures of the Saint as Simon Templar’s cabbie sidekick…and once stepped into the shoes of Mr. Templar in an episode entitled “The Fish Case” (09/02/51) when the star of the series, Tom Conway, was incapacitated by drink. Larry was also one of several actors to play famed sidekick Archie Goodwin to the corpulent Nero Wolfe (played by Sydney Greenstreet) in a celebrated crime drama broadcast on NBC from 1950 to 1951. In 1951, he sidekicked for Dan Duryea (and in the first episode, Charles McGraw) in a summer replacement for Inner Sanctum, The Man from Homicide.

One show that Larry Dobkin frequented, even though he wasn’t technically a regular, was the dean of radio westerns: Gunsmoke. Along with John Dehner, Vic Perrin, Harry Bartell, Jeanette Nolan, Sam Edwards, Virginia Gregg, Barney Phillips and so many other talented veterans, Dobkin could usually be counted on to pick up a script weekly. Well, let’s put it this way—if an episode didn’t feature Larry in a supporting role that week it was cause for concern. Dobkin would later turn up on the many radio westerns that followed in the wake of Gunsmoke’s success and dotted the landscape in radio’s waning era: Fort Laramie, Frontier Gentleman, Luke Slaughter of Tombstone and Have Gun – Will Travel.

Lawrence Dobkin’s first credited film role was in 1949’s Not Wanted, playing an assistant district attorney in the directorial debut of actress Ida Lupino (she did not receive credit for taking over for the ailing Elmer Clifton). He did not possess matinee idol looks, but his bald pate was perfect for playing all sorts of authority figures (doctors, lawyers, police sergeants)…and if push came to shove, he could always wear his toupee. His C.V. in movies is far too lengthy to list here, but some of our favorite Dobkin film appearances include D.O.A. (1950), Angels in the Outfield (1951—as a rabbi), The Day the Earth Stood Still (1951), Deadline – U.S.A. (1952), Them! (1954), The Killer Is Loose (1956), The Ten Commandments (1956—as Hur Ben Caleb!), Sweet Smell of Success (1957), Portland Exposé (1957), and The Defiant Ones (1958). You’ve also heard him narrate classics like Broken Arrow (1950) and The Robe (1953). And in North by Northwest (1959)—my favorite Alfred Hitchcock film—he plays the U.S. intelligence official who observes: “It’s so horribly sad…why is it I feel like laughing?”

Perhaps he was inspired after watching Lupino start her directing career in Not Wanted…but Lawrence Dobkin started to flex his muscles behind the camera by the late 1950s. He wrote episodes for such series as The Detectives Starring Robert Taylor and The Rifleman, produced the series Klondike and Temple Houston, and helmed a number of episodes from hit series such as The Real McCoys, 77 Sunset Strip, The Munsters, Gilligan’s Island, The Andy Griffith Show, The Donna Reed Show, Felony Squad, The Mod Squad, Emergency!, Cannon, Barnaby Jones and The Waltons. Though Larry was comfortable as the unseen narrator on Naked City, he occasionally stepped in front of the camera to play Dutch Schultz in three episodes of The Untouchables. He also appeared on the likes of I Love Lucy, Have Gun – Will Travel, Rawhide, The Streets of San Francisco (he played a memorable bad guy in that series’ pilot, a former horror film actor turned psycho)…and of course, Gunsmoke. Larry was also the only person to direct an episode of the original Star Trek series (“Charlie X”) and later appear in an episode of Star Trek: The Next Generation (“The Mind’s Eye”).

Before his death in 2002 at age 83, Lawrence Dobkin remarked on his radio days: “The few of us who are left kept telling each other we never had it so good.” He’ll certainly get no argument from us, but we’re most fortunate that Larry’s radio legacy survives in the form of several Radio Spirits collections.