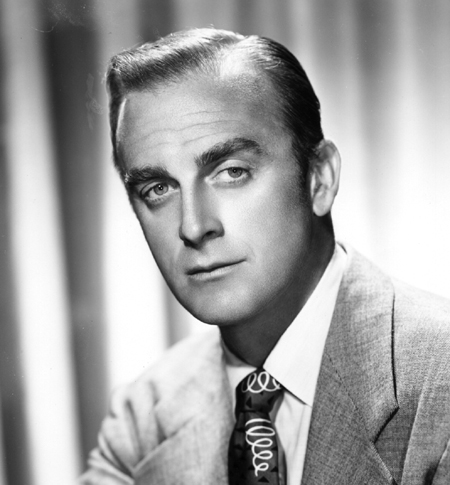 For an actor who once set out purposely not to be typecast in Western roles, John Dehner—born John Forkum —appeared in a lot of oaters across the entertainment spectrum of movies, television and radio. While his extensive radio resume certainly put Dehner’s talent for both comedy and drama on full display, for many old-time radio fans he’s the thespian who auditioned for four of the medium’s best remembered westerns. Dehner turned down the leads in Gunsmoke and Fort Laramie, and agreed to portray the protagonists on Frontier Gentleman and the radio version of Have Gun – Will Travel—a series on which he was billed as Mister John Dehner. (I often joke about this designation at my nostalgia blog, Thrilling Days of Yesteryear, but to be honest—he earned every inch of that respectful title.)

John Dehner was born the son of an artist, a man who took the Dehner family to various spots around the globe, allowing the younger Dehner to attend grammar school in Norway and France (incidentally, John learned to speak four languages as a result of his travels). Graduating high school in Hastings-on-Hudson, NY, John then decided to follow in his father’s footsteps by studying art at the University of California…but by the time he had diploma in hand, he had set his sights on a career in acting instead.

The problem for Dehner was that theatrical acting jobs were scarce as a result of the Depression. After having no luck finding work in the Big Apple, John decided to head back to sunny California on the principle that if he was going to starve, he’d be better off doing it in a more temperate climate. Dehner wasn’t on the unemployment line for long: he found work as the musical director of a touring stock company and a bandleader, in addition to securing gigs as a professional pianist. His most impressive feat was being able to fall back on his art schooling by obtaining a position as an assistant animator at the Walt Disney studios. John worked on sequences for such feature film classics as Fantasia (the Beethoven sequence) and Bambi (the Owl), and sharp-eyed viewers can spot him as one of the men in the story department in the 1941 release The Reluctant Dragon (his feature film debut).

To “do his bit” for World War II, John Dehner enlisted in the Army…and again, his background in languages and media secured for him a position as a public relations officer during the conflict. Once mustered out, Dehner decided to try acting again—this time taking a job as an announcer and news editor at such California stations as KMPC and KFWB. His work in radio news won him a most prestigious accolade: a Peabody Award for his coverage of the first United Nations news conference. The news business, however, couldn’t satisfy that acting itch, and so John found himself drifting back towards his first love. While the term “journeyman” is often used to describe an individual whose work is uninspired—in Dehner’s case, it needs to be utilized to explain that he became a very, very busy actor in front of the mike.

One of John’s earliest acting jobs was for the station that also employed him as an announcer and news reporter. He played “the Hermit” on the horror anthology The Hermit’s Cave when it aired on KMPC from 1942 to 1944. He would go on to construct a radio curriculum vitae that encompassed such favorites as California Caravan, The Cisco Kid, The Count of Monte Cristo, Crime Classics, Lassie, Let George Do It, The Man Called X, Mike Malloy, Private Cop, Richard Diamond, Private Detective, The Silent Men, Smilin’ Ed’s Buster Brown Gang, Voyage of the Scarlet Queen, The Whistler, and Wild Bill Hickok. Anthology series on which Dehner appeared include The CBS Radio Workshop, Family Theatre, The Hallmark Hall of Fame, The Lux Radio Theatre, NBC Presents: Short Story, The NBC University Theatre, On Stage, Screen Director’s Playhouse, and Stars Over Hollywood. He starred in a short-lived NBC sitcom that aired in 1950 and 1951 entitled The Truitts, and replaced Ted de Corsia for a brief period of time as Inspector Peter Black on CBS’ Pursuit.

For most of John’s career in radio, however, he was a member-in-good-standing of the stock company overseen by producer-director Norman Macdonnell. Dehner started out working on the likes of Escape and The Adventures of Philip Marlowe before becoming a regular presence on such shows as Yours Truly, Johnny Dollar (both during the brief period that Macdonnell oversaw the show, and in the later seasons as well), Suspense, Romance, Rogers of the Gazette, The General Electric Theatre and The Bakers’ Theatre of Stars. As mentioned previously, John nixed doing Gunsmoke and Fort Laramie on a regular basis…but as far as the dean of radio westerns went, Dehner emoted on 234 of Gunsmoke’s 480 broadcasts—a percentage of around sixty percent. He did fourteen episodes of Fort Laramie, out of that program’s brief run of forty broadcasts.

On February 2, 1958, CBS debuted Frontier Gentleman—a series some consider second only to Gunsmoke as radio’s finest western. Created by Antony Ellis, John Dehner starred as J.B. Kendall—an English newspaperman who wandered throughout the West, looking for people or incidents to write articles about for The London Times. Gentleman offered up superb character portraits of the individuals Kendall encountered in his travels, while always taking care to downplay Kendall’s proficiency with a gun (he wouldn’t use it unless absolutely necessary). In marked contrast to Gentleman, John also portrayed the skilled gunfighter Paladin on Have Gun – Will Travel, a radio version of the popular CBS-TV western that had been a hit for the network since the fall of 1957. Have Gun’s radio debut occurred one week after Gentleman departed the airwaves, and more than a few people have bemoaned the fact that Have Gun replaced the superior program. The radio Have Gun was an example of one of the few times when a TV series transitioned to the aural medium, rather than the usual custom of radio-to-TV. To Dehner’s credit, he made a point not to copy Richard Boone’s boob tube portrayal of Paladin (“I don’t imitate,” he declared in an interview years later). The radio version left the air on November 27, 1960, while the small screen edition continued on until 1963.

Despite John Dehner’s reluctance to be identified chiefly as a Western actor, the man good-naturedly took on many jobs that explored his range from dishonest gambler to sympathetic rancher. He was a frequent guest star on TV’s Maverick, including a classic role as the crooked banker (“…if you can’t trust your banker, whom can you trust?”) in the legendary “Shady Deal at Sunny Acres.” John’s resume of TV westerns includes favorites like Wagon Train, Wanted: Dead or Alive, The Westerner (as Burgundy Smith), The Rifleman, Tales of Wells Fargo, Rawhide, The Virginian (he starred for a time as Shiloh Ranch owner Morgan Starr)…and of course, Gunsmoke. Dehner’s regular roles were on such TV series as The Roaring 20’s, The Baileys of Balboa, The Doris Day Show, The New Temperatures Rising Show, Big Hawaii, Young Maverick, Enos, and Bare Essence. On the silver screen, John notched up over one-hundred-and-fifty films, with favorites including Scaramouche, The Bowery Boys Meet the Monsters, The Fastest Gun Alive, The Left Handed Gun, Man of the West, The Hallelujah Trail (John narrates this film), and Support Your Local Gunfighter. Dehner’s rewarding acting career came to an end in 1992, when he passed away at the age of 76.