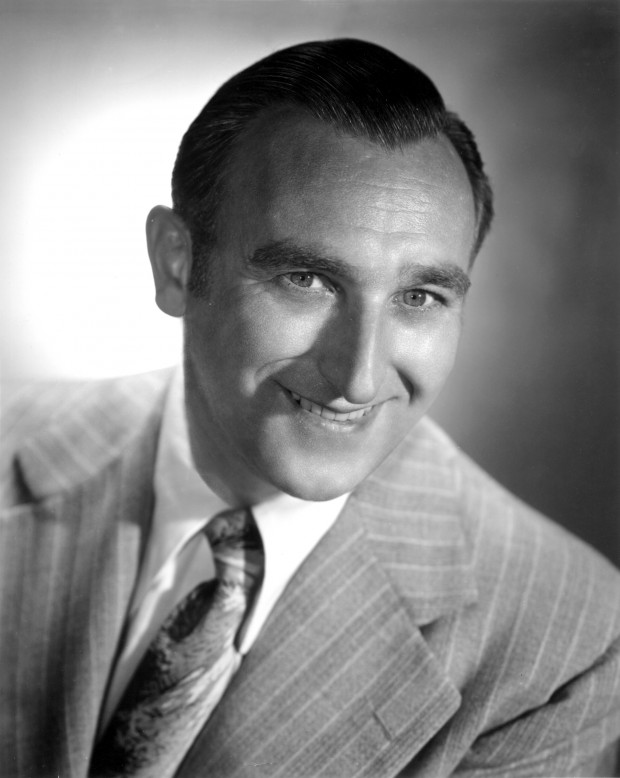 In the 1949 film The Life of Riley—based on the successful radio situation comedy created by Irving Brecher (who also directed and wrote the silver screen adaptation)—one of the series’ most popular characters is introduced in a rather novel fashion. The electricity has been cut off in the Riley household, and in the darkness we hear those familiar sepulchral tones of Chester A.’s pal, Digby “Digger” O’Dell—“the friendly undertaker.” The lights then come up, and the audience is able to see the somber mug of the character veteran whose portrayal of “Digger” saved the radio Riley from almost certain cancellation, according to creator Brecher. Old-time radio fans know the actor that played Digger (and so many other comedic creations) as John Brown, born on this date in 1904.

For an actor who mastered Noo Yawk accents with effortless ease, it’s interesting to learn that John Brown was actually a native of Hull, Yorkshire, England. After emigrating to the U.S., Brown was eager to start a career as a radio actor…but while waiting for “the call” he worked many an odd job and appeared on stage in such New York City productions as Peace on Earth and The Milky Way. (Curiously, Brown’s main source of a paycheck in the Big Apple at that time was working as a mortician’s clerk—which probably came in handy later in his career.) His earliest recorded radio credit was in a 1932 syndicated series entitled Police Headquarters, and from that he packed his resume with appearances on such dramatic shows as The Adventures of the Saint, Arch Oboler’s Plays, Casey, Crime Photographer, The Cavalcade of America, Ellery Queen, Everyman’s Theatre, Family Theatre, The Lux Radio Theatre, Mr. President, Mystery in the Air, Radio Almanac, The Shadow, The Silver Theatre, Stars Over Hollywood, Suspense, The Treasury Hour and The Whistler.

John Brown is probably better known for his comedic contributions to the Golden Age of Radio, seeing as he was afforded the opportunity to work alongside one of the leading radio funsters in Fred Allen. John appeared on Fred’s Salad Bowl Revue in 1933, and then became part of Allen’s “stock company” on Town Hall Tonight in the fall of 1934. John was still with Fred when the comedian’s weekly hour-long program became The Fred Allen Show in 1939, and when the satirist got a new sponsor in Texaco (The Texaco Star Theatre) a year later. Brown is best remembered for playing “John Doe,” one of the earliest “Allen’s Alley” tenants when Fred introduced the recurring segment in December of 1942.

On The Adventures of Ozzie & Harriet, John Brown played Syd “Thorny” Thornberry, the Nelsons’ next-door neighbor…who was often called upon to offer advice to his friend “Oz” whenever the male half of “America’s favorite young couple” found himself in a particularly sticky wicket. He offered fatherly words of wisdom as Melvin Foster on the teen sitcom A Date with Judy—and though Mr. Foster was played by other radio veterans (including Paul McGrath and Joseph Kearns), Brown made the character his own by relying on his trademark sardonic manner. John also played Homer Willoughby, Dennis Day’s boss at the drugstore where Day soda-jerked on A Day in the Life of Dennis Day; Willoughby made a good go at counseling Dennis, but usually ended up frustrated by his employee’s weekly shenanigans.

John’s radio immortality stems from two of the medium’s truly beloved situation comedies. I’ve already mentioned that Brown played “Digger” O’Dell on The Life of Riley, a character that Irving Brecher created on the spur of the moment when that week’s broadcast was going to run short. O’Dell had a touch of the macabre about him (“You’re looking fine, Riley—very natural!”) and though the show’s original sponsor thought the character was in bad taste, audiences soon made Digger a solid favorite. But Brown also doubled on Riley as Jim Gillis—who, unlike John’s “Thorny” character on Ozzie & Harriet, did not always provide the best advice to his chum (played by William Bendix). In the movie adaptation, character veteran James Gleason played Gillis to avoid the need for split-screen trickery, and when John joined the cast of the TV version of Riley that starred future Honeymooner Jackie Gleason, it was Sid Tomack who took over the Gillis duties.

Brown’s other radio claim-to-fame was his weekly gig as the perpetually unemployed Al, boyfriend to Irma Peterson (Marie Wilson) on My Friend Irma. Al was truly one of nature’s noblemen: an unrepentant loafer who subsisted solely on his unemployment checks…and the generosity of Irma, of course—his little “Chicken.” While John Brown was working on both Irma and The Life of Riley, he landed a program that would allow him to be the star. Carrying an entire show was not a new experience for the actor—he had played the titular The Busy Mr. Bingle back in 1943—but The Damon Runyon Theatre allowed John to combine his comedic and dramatic talents as “Broadway,” the narrator (and frequent participant) in stories based on the wonderful tales from the pen of author Damon Runyon.

Suffice it to say, John Brown was kept so busy in radio that it rarely gave him time to concentrate on a film career. But he turns up in a number of wonderful classic films. One of my favorites is a small role in his old boss Fred Allen’s It’s in the Bag! (1945), in which he plays a theatre usher who stands outside and announces “Immediate seating on all floors!” Later that year, John had an equally memorable turn as a sarcastic cafeteria manager in The Horn Blows at Midnight (1945), which starred Allen’s nemesis Jack Benny. Brown’s movie resume also includes bit parts in such features as Casanova Brown (1944), The Stranger (1946), Three Desperate Men (1951), The Day the Earth Stood Still (1951), The Sniper (1952), The Bigamist (1953) and The Wild One (1953). Classic movie fans can spot him in Strangers on a Train (1951) as the soused professor who can provide Guy Haines (Farley Granger) an alibi for a murder that Haines has been accused of…if he can only remember the events of the previous evening. (Brown also voices “Ro-Man,” the alien ape protagonist—clad in a diving helmet—in the 1953 cult oddity Robot Monster.)

John Brown was starting to make inroads on the small screen with his reprisal of “Digger” O’Dell on the Gleason Life of Riley, and he also guest-starred on the likes of Amos ‘n’ Andy, I Love Lucy and Biff Baker, U.S.A. He had taken over as “Harry Morton” on The George Burns & Gracie Allen Show when his name surfaced in the infamous Red Channels. As a result of being blacklisted, John found himself fighting to get work. The experience clearly took a toll on this multi-talented actor, for Brown passed away in 1957 at the age of 53.