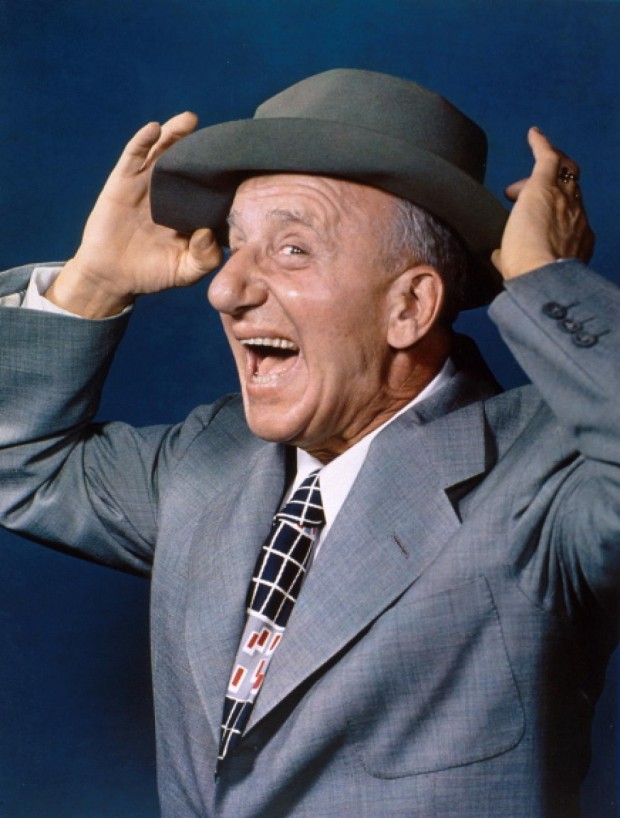 From the 1920s and onward, James Francis Durante—born in Manhattan on this date in 1893—was the entertainer who advised audiences that they have to start off each day with a song.  Durante’s large proboscis earned him the nickname “Schnozzola,” and he became known for singing jazz/ragtime-influenced songs in his trademark gravelly voice while wearing a battered hat.  Jimmy’s lengthy career in show business—which spanned stage, screen, radio, and TV—was fueled by audiences who were genuinely fond of his larger-life-personality.  Fans eagerly repeated his famous catchphrases (like “Everybody wants to get inta the act!” and “I got a million of ‘em!”) with gusto.  As his longtime vaudeville partner Lou Clayton once observed: “You can warm your hands on this man.”

The youngest of four children born to Italian immigrants Rosa (Lentino) and Bartolomeo Durante, Jimmy’s interest in show business began when he reached the age of seventeen.  He began performing in various venues around Coney Island, and in a club owned by a man named Terry Walsh (Jimmy played piano while a waiter named Eddie Cantor sang).  Durante had formed a Dixieland combo in Harlem’s Club Alamo, and it was here that he honed the routine that became his fame and fortune: frequently interrupting his own musical numbers (“Stop da music!  Stop da music!”) to tell jokes.  It was here that he met his longtime associate Eddie Jackson.  Durante, Jackson, and a third performer named Lou Clayton opened a nightclub in 1923 known as the Club Durant.

The Club Durant, successful as it was, would eventually have its doors nailed shut by Prohibition agents.  Unbowed, Clayton, Jackson and Durante continued in vaudeville and eventually hit it big on Broadway before the team agreed to an amicable split in the 1930s.  (Clayton and Jackson continued their tight-knit friendship with Jimmy, even becoming his business managers later in his career.)  Durante’s film debut was in 1930s Roadhouse Nights (Clayton and Jackson also appear, along with the legendary Helen Morgan).  From that moment on, he was a star at MGM in such vehicles as New Adventures of Get Rich Quick Wallingford (1931), The Wet Parade (1932), Meet the Baron (1933), and Hollywood Party (1934).  The three vehicles that teamed Jimmy with silent comedy great Buster Keaton—The Passionate Plumber (1932), Speak Easily (1932), and What—No Beer? (1933)—were big hits at the box office…but Keaton’s struggles with both the studio and alcoholism put an end to their partnership.  Jimmy would continue to maintain quite a presence in motion pictures, notably in the 1942 Christmas film classic The Man Who Came to Dinner.

As Jimmy Durante busied himself with movie success, he began to explore fields in the aural medium.  He appeared on Eddie Cantor’s popular The Chase and Sanborn Hour from September to November 1933, and then became the show’s host in April of 1934.  The ratings for the show had already started their decline by the time Durante came aboard, so it may be a little unfair to blame the entertainer for its eventual cancellation in the fall.  But Jimmy’s determination to establish himself as a radio star hit another bump in the road when he was put in charge of The Jumbo Fire Chief Program in October of 1935. The once-popular series (previously hosted by the madcap Ed Wynn) had started to fall out of favor with listeners through no fault of Durante’s, and the show rang down the curtain in February of 1936.

Despite these initial setbacks, Jimmy Durante would eventually find the radio success that eluded him in the 1930s.  In 1943, while he was packing them in at New York’s famed Copacabana, he accepted an offer to be a guest on NBC’s popular Camel Caravan.  On that very broadcast, director-producer Phil Cohan was struck by the contrast between the veteran Durante and an up-and-coming young funnyman named Garry Moore.  Though Moore had been given the greenlight to host the summer replacement for The Abbott & Costello Program (also sponsored by Camel), Cohan approached both Durante and Moore to see if they were interested in teaming up for a possible series in the fall (the sponsor was a little nervous about Garry’s ability to carry a series).  Jimmy and Garry would begin their partnership sooner than they expected: when Lou Costello found himself confined to bed rest with a severe case of rheumatic fever, Durante and Moore found their show rushed into production (in just two weeks) as Abbott & Costello’s replacement.

“The Nose” (Jimmy) and “The Haircut” (Garry) were a smash hit, and Camel continued to sponsor The Camel Comedy Caravan (later to become The Jimmy Durante-Garry Moore Show) on CBS beginning in the fall of 1943.  The two men were given ample opportunity to shine as both solo performers and a team; their coupling took on a father-son relationship, with Jimmy frequently referring to Garry as “Junior” and introducing the catchphrase “Dat’s my boy dat said that!”  (Many listeners were convinced the duo really were father and son.)  Rexall Drugs took over sponsorship in 1945, and two years later Durante and Moore agreed to a harmonious parting of the ways.  (Moore would go on to host the radio quiz show Take It or Leave It, and on television he headlined a popular TV variety series from 1958 to 1964 and was the longtime moderator of the successful panel quiz I’ve Got a Secret.)

Beginning on October 1, 1947, Durante returned to NBC with The Jimmy Durante Show, a half-hour comedy-variety program also sponsored by Rexall.  Durante—accompanied by Roy Bargy’s orchestra—would open each show with a rendition of his theme Inka Dinka Doo (a classic ditty he introduced in the 1934 movie Palooka).  Bargy was a holdover from the Durante-Moore years, and the new Rexall show also brought back announcer Howard Petrie and regular supporting stooges Elvia Allman and Candy Candido (“I’m feeling mighty low…”).  Also joining the “Schnoz” on his new series were Florence Halop (as sexy Mae West clone “Hotbreath” Houlihan), Arthur Treacher (as Jimmy’s butler—Durante must have lured him away from Jack Carson, who had previously employed Arthur on his show), Dave Barry, Alan Reed, and Victor Moore (who was promoted to regular after a series of guest appearances).  Musical numbers were contributed by the Crew Chiefs and a young Peggy Lee…and of course, Durante himself would warble any number of his hits, like I Know Darn Well I Can Do Wit’out Broadway and I’m Jimmy, That Well-Dressed Man.

Camel resumed sponsorship of The Jimmy Durante Show in the fall of 1948, and Durante would rekindle the father-son relationship he had enjoyed with Garry Moore when Alan Young joined the show. (Young had enjoyed previous radio success with a self-titled series heard over ABC from 1944-47.)  When Young’s show was given a new lease on life by NBC in April of 1949, Don Ameche took over as Jimmy’s sidekick (Barbara Jo Allen—a.k.a. “Vera Vague”—would also become a regular) and the two men kidded and joked until Durante called it quits on June 30, 1950.  Jimmy didn’t completely abandon radio, however—in addition to guest appearances on the likes of Family Theatre and Fibber McGee & Molly (yes, you read that right), he became a frequent presence on The Big Show…the all-star NBC radio spectacular hosted by Tallulah “May the Good Lord Bless and Keep You” Bankhead.

Like so many of his fellow radio stars, Jimmy Durante would make a successful leap to the small screen.  He hosted The Colgate Comedy Hour on several occasions, was one of the rotating hosts of All Star Revue/Four Star Revue from 1950 to 1953, and was the star of The Jimmy Durante Show from 1954 to 1956.  He continued as a favorite guest star on TV variety shows in the 1960s (not to mention headlining The Hollywood Palace and Jimmy Durante Presents the Lennon Sisters) and appeared in feature films like Billy Rose’s Jumbo (1962—“What elephant?”) and It’s a Mad Mad Mad Mad World (1963).  My generation knew Jimmy as the narrator of the animated Christmas special Frosty the Snowman (which first aired in 1969) and a pitchman for Kellogg’s Corn Flakes.  A stroke rendered Jimmy wheelchair-bound in 1972, and in 1980 Durante went to join his beloved “Mrs. Calabash” (he frequently closed performances with the memorable “Goodnight, Mrs. Calabash…wherever you are”) at the age of 86.