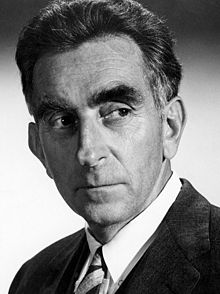 In May of 2017, the memoirs of character actor Jeff Corey—born Arthur Zwerling in Brooklyn in 1914—were published to much critical acclaim.  Written with his daughter Emily, Improvising Out Loud: My Life Teaching Hollywood to Act concentrates a great deal on Corey’s second career as an acting teacher.  (The change of profession was necessitated by his blacklisting in the 1950s, due to his past political affiliations).  The list of his students who “went on to bigger and better things” is a lengthy and most impressive one. Performers under Jeff’s tutelage include Jack Nicholson, Jane Fonda, Rita Moreno, Barbra Streisand, Robin Williams…and, shortly before his passing in 1955, James Dean.  Corey is beloved by classic film fans for his appearances in movie westerns like True Grit (1969—as bad guy Tom Chaney) and Butch Cassidy and the Sundance Kid (1969) and his old-time radio bona fides weren’t too shabby, either.

Jeff Corey was the son of working class Jewish immigrants, and though he was “an indifferent student” in high school, a drama class he took fueled his interest in acting.  He earned a scholarship with the Feagin School of Dramatic Arts, one of NYC’s prestigious theater schools; his stint there, he later reflected, rescued him from a career as a sewing machine salesman.  While at Feagin, Jeff worked with the New York Federal Theatre Project alongside such luminaries as John Randolph, Elia Kazan, and Jules Dassin.  Post-Feagin, Corey landed a job with a Shakespearean repertory company, and later found work with a traveling children’s theater troupe.  One of Corey’s earliest onstage showcases was portraying “Rosencrantz” in a touring production of Hamlet, a Broadway success overseen by actor Leslie Howard.

With his wife Hope, Jeff moved to Los Angeles in 1940 to find work in motion pictures…and old-time radio fans may have seen him in a brief bit as a game show contestant forced to sing a song with a mouthful of crackers in You’ll Find Out (1940), starring the Ol’ Perfesser himself, Kay Kyser.  Corey got small roles in movies like The Devil and Daniel Webster (1941), Roxie Hart (1942), Frankenstein Meets the Wolf Man (1943), and My Friend Flicka (1943). When he wasn’t toiling in B-pictures, he helped established the Actors Lab, where he appeared in such productions as Abe Lincoln in Illinois and God Bless Our Bank (opposite Ann Sothern).  Jeff joined the Navy in 1943, and was assigned to the U.S.S. Yorktown as a combat photographer; he later earned citations for the footage he captured during a kamikaze attack on the ship.

While his movie career was going great guns, Corey also appeared on many occasions in front of a radio microphone on such shows as The Lux Radio Theatre and Favorite Story.  Jeff made the rounds on many of radio’s top dramatic anthologies, notably Escape, NBC Presents: Short Story, The NBC University Theatre, Screen Directors’ Playhouse, Suspense, and The Whistler.  On The Adventures of Philip Marlowe, Corey regularly played Lieutenant Ybarra—the police contact of the titular P.I. portrayed by Gerald Mohr.  Rounding out Jeff’s radio resume are appearances on the likes of The Curtain of Time, Night Beat, The Silent Men, Tales of the Texas Rangers, Tell it Again, and This is Your FBI.  The actor’s enjoyment of radio acting would continue through radio revival attempts in the 1970s (like The Sears Radio Theatre). Corey also appeared on an NPR broadcast in 1997, in a production written and directed by the legendary Norman Corwin.  This effort, titled Our Lady of the Freedoms and Some of Her Friends, was a July 4th commemoration (and the swan song for journalist-commentator Charles Kuralt).

During his time with the New York Federal Theatre Project, Jeff Corey attended Communist Party meetings…but he never actually joined the Party.  It made little difference to the House Un-American Activities Committee, who subpoenaed him to testify in September of 1951.  Corey later recalled to Patrick McGilligan, the co-author of Tender Comrades: A Backstory of the Hollywood Blacklist: “The only issue was, did you want to just give them their token names so you could continue your career, or not?  I had no impulse to defend a political point of view that no longer interested me particularly.”  His decision not to “name names” meant that, at the age of 37, Jeff Corey was out of work with a wife and three daughters to support.  Undaunted, Jeff found work as a laborer (earning $14 a day) and then enrolled at UCLA on the G.I. Bill.

His teaching career came about purely by accident.  A fellow UCLA student who wasn’t doing well in his studies organized an acting class and talked Jeff into teaching it—so Corey launched the ambitious enterprise out of his garage.  A young freshman, Carol Burnett, was among the first of his students—the “tuition” for “Corey University” was $10 a month for two classes a week.  Not given to self-promotion, Corey’s acting classes soon became popular via word-of-mouth and, by the mid-1950s, he would become the most sought-after acting coach in Tinsel Town.  (The irony is that several of Jeff’s students related that while auditioning for acting jobs they would be told that the studios were looking for a “Jeff Corey-type.”)  The list of individuals who studied with Jeff Corey is a long one, but just to drop a few names: Robert Blake, James Coburn, Richard Chamberlain, Sally Kellerman, Shirley Knight, Penny Marshall, Rob Reiner, Anthony Perkins, Sharon Tate, and Leonard Nimoy (who contributed the foreword to Corey’s memoirs).

Jeff Corey didn’t work in movies or television for many years, but the logjam was broken with a role in a 1961 episode of The Untouchables. Jeff then began appearing in films, such as The Yellow Canary (1963—starring Pat Boone, a one-time student of Corey’s) and Lady in a Cage (1964—as the wino who menaces Olivia de Havilland).  Corey did some of his finest film work in this period, with roles in The Cincinnati Kid (1965), In Cold Blood (1967), The Boston Strangler (1968), and Little Big Man (1970—as Wild Bill Hickok!).  I’m a huge fan of his turn in the cult classic Seconds (1966), in which he plays the ominous, chilling counselor to John Randolph’s tired businessman (who is later turned into handsome Rock Hudson).  Not only did Jeff get to work with his old friend Randolph, but fellow blacklistee Will Geer is also in the film (and is equally sinister).

Corey continued to work in movies and TV throughout the 70s, 80s, and 90s (he was a regular on former student Robert Blake’s short-lived series Hell Town). He even received several opportunities to direct (episodes of Night Gallery and Alias Smith and Jones are on his C.V.).  According to Patrick McGilligan, Jeff was “an actor’s actor, someone that actors loved to watch because he was always doing something interesting in his work.”  Corey passed away in 2002 at the age of 88 (from complications suffered after a fall), but he left us with a legacy of acting riches.  But as McGilligan notes: “He was a wonderful actor who we never fully got to see because of the blacklist.”

Oscar-winning actor Jack Nicholson was an 18-year-old rebel when he first enrolled in Jeff Corey’s acting classes…and later observed that the one lesson he took away from his experience was “You can’t change the world…but you can make the world think.”