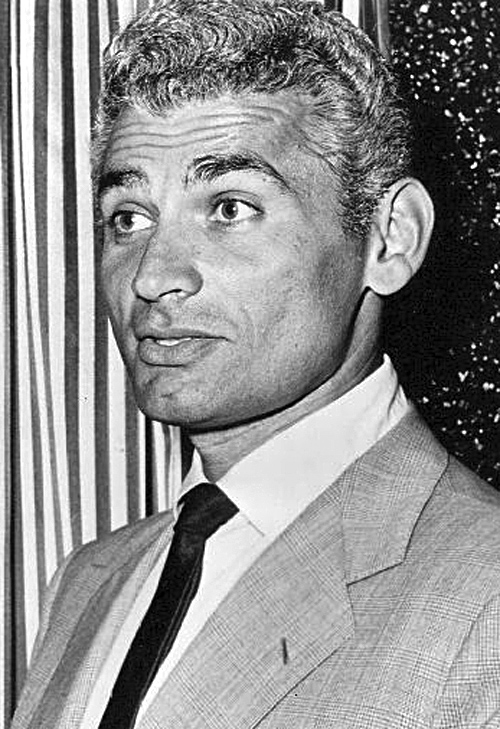 If you were given a name like “Ira Grossel” at birth…chances are you’d have a long career as a certified public accountant or a dentist waiting in the wings once you reached adulthood. But one particular Ira Grossel would overcome the name handicap by becoming a well-known actor—a rewarding gig that spanned both radio, TV and the movies. It was the last medium that brought Ira his greatest fame: as an employee at Universal Pictures, he would become one of their top leading men and most bankable of box office stars. I should also point out that you may be more familiar with Mr. Grossel as Jeff Chandler—born on this date today in 1918.

Chandler grew up in Brooklyn, the son of Philip and Anna Herman Grossel…who were separated at the time of his birth. (Later, Anna would bring up Jeff when the Grossels divorced.) After attending Erasmus Hall High School, he landed a job as a cashier in his father’s restaurant. Jeff had harbored acting ambitions for a good while but studied art for a year (and worked as a layout artist for a mail order catalog) before he saved up enough money to attend the prestigious Feagin School of Dramatic Art in New York City. From there, Jeff Chandler went to work for a theatrical stock company on Long Island as an actor and stage manager, and later formed his own company, The Shady Lane Playhouse, in Illinois in 1941. His acting career went on hiatus as he enlisted in the Cavalry not long after, serving four years in the Aleutian Islands during World War II.

After his discharge, Chandler moved to Los Angeles with money he had saved and almost immediately found work in radio. He had dabbled in the medium during his stock company days, and his experience there provided him with the experience to make a good living emoting on the airwaves, particularly in the area of anthology drama. Some of the anthology programs on which Jeff worked include Academy Award Theatre, The Cavalcade of America, The Damon Runyon Theatre, Escape, Family Theatre, Hallmark Playhouse, The Lux Radio Theatre, Mr. President, The Railroad Hour, Screen Director’s Playhouse, Stars Over Hollywood, Suspense and The Whistler.

One of Jeff’s most unusual radio gigs was an appearance on a December 22, 1948 broadcast of Duffy’s Tavern; in a Yuletide episode that some refer to as “Miracle in Manhattan,” he played a stranger who brightens the spirit of “Archie the Manager” (Ed Gardner) after Archie is denied a Christmas bonus. Chandler’s other radio credits include The Adventures of Philip Marlowe, The Casebook of Gregory Hood, The Dean Martin & Jerry Lewis Show, Ellery Queen, Jeff Regan, Investigator, Let George Do It, The Sealtest Variety Theatre and The Voyage of the Scarlet Queen.

Jeff Chandler’s first starring role on a radio series was playing the part of medical doctor Steve Dana on The Private Practice of Dr. Dana, a CBS West Coast program heard from 1947-48. He then landed the part of Brett Halliday’s legendary literary sleuth Michael Shayne in a syndicated series entitled The New Adventures of Michael Shayne in 1948, and a year later—billed as “Tex” Chandler—initiated the lead on the syndicated Frontier Town, a Western drama on which he portrayed Chad Remington (Jeff handed over the role to Reed Hadley midway through the series’ run). For many old-time radio fans, Chandler is best known as Philip Boynton—the “bashful biologist” who served as the unobtainable object of desire to Constance Brooks (Eve Arden), Madison High’s beloved English teacher on the popular CBS sitcom Our Miss Brooks.

The part of Mr. Boynton could arguably be called Chandler’s best radio role; his distinctive voice and previously untapped comedic talent made Boynton a most likable character (even though he was a bit dim not to see that Connie had it bad for him) and Our Miss Brooks a solid hit. The problem for Jeff was that while he excelled vocally in the part, he knew that visually, he just wouldn’t be right for Boynton when Brooks eventually transitioned to TV in the fall of 1952. Jeff Chandler was a ruggedly handsome chap, with a 6’4” build, broad shoulders and a tan from head to toe—so the creative minds behind OMB cast Robert Rockwell as Boynton for the boob tube version, who looked more like a nebbish science teacher. To Chandler’s credit, he insisted on continuing to play Boynton on radio until the end of his contract (Rockwell took over after that)—still, it’s sad that of all the Brooks principals Jeff was the only one who didn’t make the transition to the small screen.

Fortunately, Jeff was occupied on the silver screen by that time. A guest appearance on Dick Powell’s Rogue’s Gallery impressed Powell so much that he gave Chandler a small role in a 1947 noir, Johnny O’Clock. The actor continued to appear in small roles in the likes of Walk a Crooked Mile (1948) and Mr. Belvedere Goes to College (1949), and his work on Our Miss Brooks attracted the attention of Universal studio executives, who cast him as an Israeli leader in Sword in the Desert (1949)…and then signed him to a seven-year contract beginning with Abandoned that same year.

Chandler’s skyrocketing silver screen fame was actually due to a film released by 20th Century-Fox in 1950. Jeff would play the role of the Apache chief Cochise in that studio’s successful Broken Arrow, which also starred James Stewart and Debra Paget. His performance garnered an Academy Award nomination as Best Supporting Actor, and he would later reprise the role in 1952’s The Battle at Apache Pass (this time at Universal) and cameoed as Cochise in Taza, Son of Cochise (1954). Jeff was a bona fide matinee idol by this time; his tanned appearance allowed him to appear in a variety of films such as Flame of Araby (1951—as an Arab chief) and the 1951 remake of Bird of Paradise (as a Polynesian). Red Ball Express (1952), Sign of the Pagan (1954), Foxfire (1955), Female on the Beach (1955), Away All Boats (1956), The Tattered Dress (1957), Jeanne Eagels (1957), Man in the Shadow (1957) and Return to Peyton Place (1961) are just a few of the many movies that featured the popular actor.

His work in movies kept him pretty busy, but Jeff Chandler still found the time to appear on programs with established boob tube favorites such as Martin & Lewis, Dinah Shore, Perry Como, Steve Allen and Frank Sinatra. He even dabbled in music: Jeff formed his own publishing company, Chandler Music, and recorded a few albums while entertaining in nightclubs (though the verdict is still out on Chandler’s actual musical talent). After completing what would be his final film role in 1962’s Merrill’s Marauders, Jeff had to undergo surgery for a spinal disc herniation that resulted from a back injury playing baseball with some extras in the movie. Complications unfortunately resulted when one of the actor’s arteries was damaged during the procedure and Chandler began hemorrhaging. A second operation could not repair the injury…and Jeff Chandler passed away at the age of 42 on June 17, 1961.