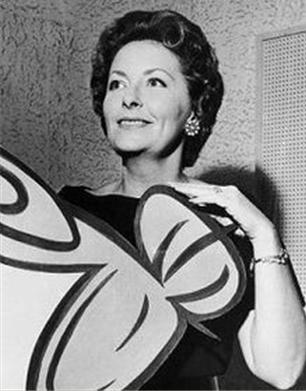 Universal Pictures brought a live-action version of the classic TV cartoon series The Flintstones to the big screen in 1994, and had the novel idea of casting Jean Vander Pyl (the actress who voiced Wilma Flintstone on the original show) in a small role. (Vander Pyl was the only surviving cast member of the Flintstones starring quartet, which also included Alan Reed, Mel Blanc, and Bea Benaderet).  Portraying Wilma in the live-action treatment was Elizabeth Perkins, who received this bit of advice from Jean: “To do Wilma, all you have to do is remember ‘Fred’ is a two-syllable word.”  (As in Fr-ed.)  Vander Pyl, born in Philadelphia on this date in 1919, originally had her heart set on becoming a theatrical actress…but circumstances beyond her control steered her into radio.  Fans who instantly recognize her distinctive voice from that medium — and a slew of animated cartoons that followed in its wake — are extremely grateful.

Born to John H. and Kathleen Hale Vander Pyl, young Jean moved with her family to Los Angeles in the mid-1930s, and by the time she graduated from Beverly Hills High School in 1937 she knew she wanted to conquer Broadway.  (Winning a Best Actress award for portraying ‘Juliet’ in a citywide Shakespeare festival cinched her career plans.)  But an illness put the brakes on her stage ambitions, and she decided instead to look for work in radio while attending UCLA.  Juggling college and radio was difficult. (“My sorority sisters told me I either had to go to work or go to class,” she reminisced in 1989.) Vander Pyl chose radio, freelancing at any number of Hollywood stations. She gained exposure on network shows like Calling All Cars and The Lux Radio Theatre, and appeared as “damsels in distress” on various dramatic series.

By the 1940s and 1950s, Jean Vander Pyl was making the rounds on the likes of The Cavalcade of America, Chandu the Magician, Family Theatre, and Wild Bill Hickok.  Her vocal talents were much in demand playing characters on comedy programs starring Jim and Marian Jordan (Fibber McGee & Molly), Joan Davis, and Alan Young.  She also landed frequent roles on Beulah, The Halls of Ivy, Meet Mr. McNutley, and My Favorite Husband.  If Andrew Brown (Charles Correll) needed a girlfriend for that week’s broadcast of Amos ‘n’ Andy, Jean was usually pressed into service to play Andy’s latest romantic conquest.  The actress’ steadiest gig was emoting as Margaret Anderson, wife of insurance salesman Jim Anderson (Robert Young) on the popular NBC sitcom Father Knows Best.  As Margaret, Jean patiently acted as a sounding board to her husband, and doted on the three Anderson children (Betty, Bud, and Kathy) from 1949 to 1954.  (Jane Wyatt would portray Margaret on the TV version of the series).

Jean didn’t shy away from the visual mediums of movies and television, but has only one feature film to her credit, 1954’s Deep in My Heart.  She made guest appearances on TV hits like The Millionaire, Medic, Leave it to Beaver, Please Don’t Eat the Daisies, and Petticoat Junction.  But Jean knew that her voice was her fortune, and that she “lived without the burdens of stardom.”  “Then a few of us got lucky and got into cartoons,” she reminisced in 1989, and this was no exaggeration: she became one of the fledgling Hanna-Barbera studio’s most dependable thesps.  Vander Pyl voiced characters in their theatrical Loopy de Loop shorts, and also for TV’s The Huckleberry Hound Show, The Quick Draw McGraw Show, The Yogi Bear Show, and Top Cat.  When Bill Hanna and Joe Barbera developed the prime time animated series known as The Flintstones, Vander Pyl was hired to voice Wilma Flintstone.  The actress later said that the long-suffering spouse of bombastic Fred (Alan Reed) “had a great ‘housewife whine’ to her voice.”  (Jean also provided the voices of the Flintstone’s baby daughter, Pebbles, and the wife of Fred’s boss, Mr. Slate.) The Flintstones ran on ABC-TV from 1960 to 1966, and in countless Saturday morning incarnations to follow (Pebbles and Bamm Bamm, The Flintstones Comedy Hour, etc.).  There was even a feature-length cartoon based on the series and released in 1966: The Man Called Flintstone.

Wilma Flintstone was Jean Vander Pyl’s best-remembered work in the world of cartoons, but she also voiced such characters as Rosie the Robot on The Jetsons, Ogee (the little girl who always wanted to know “How much is that gorilla in the window?”) on The Magilla Gorilla Show, Winsome “Winnie” Witch (“Ippity-pippity-pow!”) on The Secret Squirrel Show, and Ma and Floral Rugg in the “Hillbilly Bears” segments on The Atom Ant Show and The Banana Splits Adventure Hour.  She continued her long association with Hanna-Barbera throughout the 1970s on shows like Where’s Huddles?, Scooby Doo, Where are You?, Inch High Private Eye, Yogi’s Gang, Hong Kong Phooey, Dinky Dog, and Captain Caveman and the Teen Angels.

By the 1980s, Jean Vander Pyl was still voicing Wilma in various Flintstones specials while occasionally appearing on such TV shows as Murder, She Wrote and Hardcastle and McCormick.  It would be no exaggeration to say that she may have been the most known unknown actress in the business (people instantly recognized her voice…and yet she was able to live in San Clemente for many years in relative anonymity).  As for the role that made her famous, Jean opted for a lump sum of $15,000 upon cancellation of The Flintstones (she made $250 per episode when the show was running in prime time) instead of receiving residual payments.  “If I got residuals I wouldn’t live in San Clemente,” she told an interviewer in 1995.  “I’d own San Clemente.”  Vander Pyl succumbed to lung cancer at the age of 79 in 1999.

By the way, the lung cancer that claimed Jean Vander Pyl’s life was the result of a lifelong smoking habit…and if you were ever curious as to why the Wilma Flintstone and Betty Rubble characters on The Flintstones laughed with what has been called “the closed-mouth giggle,” that’s your answer.  Jean’s son explained to author Tim Lawson that his mother and Bea Benaderet (the voice of Betty, until her work on Petticoat Junction dictated she relinquish the role to Gerry Johnson) were heavy smokers and that if they laughed out loud they’d succumb to a coughing jag.