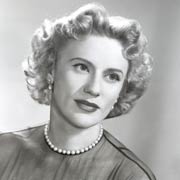 On radio, one of the rare daytime dramas to stand out from its weepy brethren and sistren was Hilltop House—a series that took place in an orphanage located in the fictional town of Glendale and sponsored throughout its four-year-run by Colgate-Palmolive-Peet. You read that right: Hilltop House initially ran for only four years (1937-41) before its creators voluntarily took the show off the air. The new advertising agency wanted the team to compromise on the fine, literate quality of Hilltop—something producer Edwin Wolfe and writer “Adelaide Marston” (the pen name of scribes Addy Richton and Lynn Stone) simply refused to do.

Hilltop House would return to the airwaves in May of 1948 and made itself at home on the radio dial until July 30, 1957. The lead role of the orphanage’s administrator, Julie Erickson, would no longer be essayed by radio veteran Grace Matthews; furthermore, the show’s sponsorship had passed from Palmolive to Miles Laboratories (makers of Alka Seltzer). Actress Jan Miner—born in Boston, Massachusetts on this date in 1917—would play Julie till the show folded its tent; as for Palmolive, Ms. Miner would soon enjoy a long relationship with that product much later in her show business career…but I’ll get to that in a bit.

Young Janice Miner attended Boston’s prestigious Vesper George School of Art before deciding on an acting career. To accomplish this, she studied with renowned acting teacher Lee Strasberg and others, enabling her to make her stage debut in Boston in 1945 in a production of Street Scene, written by Elmer Rice. A move to the Big Apple the following year to continue in the footlights found Jan also breaking into local radio at a station in Hartford, Connecticut. While her Broadway resume would later include the likes of Othello, The Women, The Heiress and Watch on the Rhine, it was radio that would provide a steady source of groceries on the table when Miner took over for Joan Tompkins as Lora Lawton in 1946 (Jan would play the part until 1950).

In addition to Lora Lawton and Hilltop House, Jan added to her daytime radio c.v. with stints on Perry Mason (as Perry’s gal Friday, Della Street) and I Love Linda Dale. In prime-time, Miner played Mary Wesley for a time on Boston Blackie and Ann Williams, the girlfriend of Casey, Crime Photographer as well. She emoted on many of radio’s top dramatic anthologies: Radio City Playhouse, My Secret Story, The Cavalcade of America, The MGM Theatre of the Air, Best Plays and The CBS Radio Workshop. In addition, Jan worked on such shows as 21st Precinct, The Big Show, The Chase, Cloak and Dagger, Dimension X, The Falcon, I Love a Mystery (the Mutual version), The Mysterious Traveler, Rocky Fortune, That Hammer Guy, X-Minus One, and Yours Truly, Johnny Dollar. Even after radio had said goodbye to its glory days, Jan’s reverence for the medium was such that she could be heard on such 1960s revival programs as The Eternal Light and Theater Five.

The gradual disappearance of radio prompted Jan Miner to look elsewhere for work. Miner did quite a bit of repertory theatre, but she would also reprise her Ann Williams role on Crime Photographer when it appeared briefly on TV in 1951. For the most part, she depended on guest star roles on such programs as Schlitz Playhouse, Lux Video Theatre, Robert Montgomery Presents, One Step Beyond, Naked City, The Defenders and The Doctors and the Nurses. Miner continued to be busy with appearances on such 1970s series as One Day at a Time and Paul Sand in Friends and Lovers. She had a recurring role on the latter show as the mother (Marge Dreyfuss) of the series’ titular star.

By the time of her stint on Friends and Lovers, I’d be willing to guess confidently that audiences at home shouted out “Madge!” when Jan Miner made her appearances. Jan’s best-remembered television work remains a series of commercials for Palmolive dishwashing liquid; she played “Madge the Manicurist,” a wisecracking beautician who did the nails of customers at the Salon East Beauty Parlor. Her conversations with her clientele started out innocently enough…but they would gradually veer toward the topic of the Palmolive product since her unsuspecting patrons were completely unaware their digits were soaking in the dishwashing liquid until Madge nonchalantly revealed the contents. “Palmolive softens hands while you do the dishes,” she would declare in the successful ad campaign shown on small screens from 1966 to 1992.

Jan Miner may not have had a voluminous movie resume like some of her fellow radio actors…but she made the most of the parts she did land; her most famous film role was playing Sally Bruce, the mother of future comedic legend Lenny (Dustin Hoffman) in the 1974 biopic Lenny, and she also can be seen in the likes of The Swimmer (1968—a particular favorite of mine), Willie & Phil (1980), Endless Love (1981) and Mermaids (1990—she plays the Mother Superior!). Her last IMDb credit was an appropriate guest appearance on the cable sitcom Remember WENN; I caught Jan in a Law & Order repeat (“Golden Years”) and asked my mother if she recognized the actress. (I eventually had to reveal Miner’s Madge the Manicurist identity.) Jan Miner passed away in 2004 at the age of 86.

Like many of my generation, I knew Jan Miner only as the gal who hawked Palmolive; I didn’t learn of her amazing radio career until much later, and she’s been a favorite of mine ever since that revelatory moment.