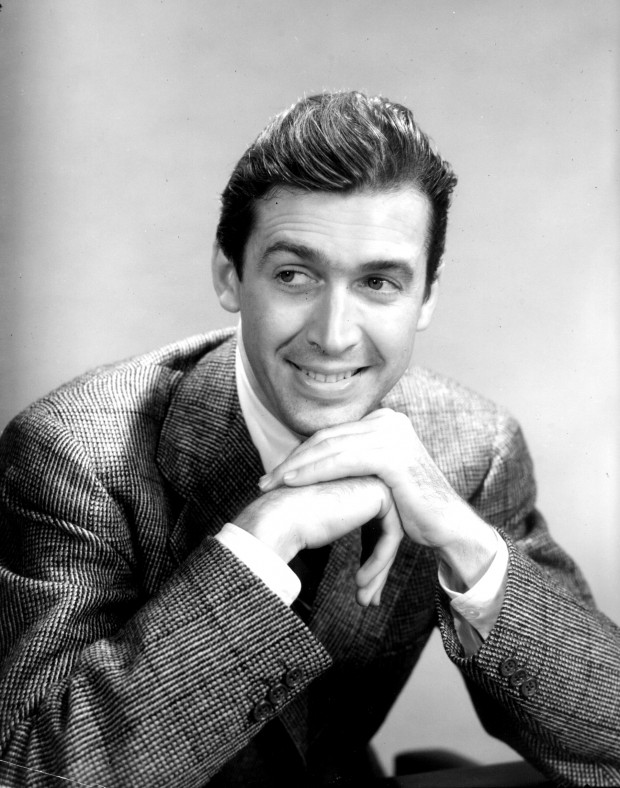 James Maitland Stewart, the Academy Award-winning actor beloved by theatergoers as “the boy next door” was born on this date in Indiana, Pennsylvania in 1908. Jimmy took home Oscar gold for his unconventional role (and by unconventional, I mean a “fast-talking” reporter) in The Philadelphia Story (1940)—though a good many people (myself included) are convinced it was a consolation prize for his not winning the prior year for his nominated performance in Mr. Smith Goes to Washington. Stewart would garner Oscar noms for three additional movies—It’s a Wonderful Life (1947), Harvey (1950) and Anatomy of a Murder (1959)—before being recognized by his peers in 1985 with an honorary statuette paying tribute to his fifty-year cinematic career.

I could take up an entire webpage discussing Stewart’s incredible movie resume: chatting about such classics as You Can’t Take It With You (1938), Destry Rides Again (1939) and The Shop Around the Corner (1940). But I thought it fitting to focus on the actor’s impressive radio C.V. As one of the “more stars than there are in heaven” at Metro-Goldwyn-Mayer, Stewart was selected to be the first host of Good News of 1938, a lavish variety hour (sponsored by Maxwell House) that featured just about anyone working on the MGM lot at that time. Jimmy was the emcee on the series’ November 4, 1937 inaugural broadcast, and while he was replaced by Robert Taylor in early 1938, the actor continued to make guest appearances on the program (he was even around for the name change, Good News of 1939).

Stewart’s distinctive drawl and “aw shucks” manner made him the perfect foil for such radio comedy greats as Jack Benny, Edgar Bergen & Charlie McCarthy, and Bob Hope. The actor also guested alongside Bing Crosby, Dorothy Lamour, Louella Parsons, Bill Stern, Fred Waring and the usual suspects on It Pays to Be Ignorant. As his stardom grew, Jimmy Stewart was often called upon to not only reprise his film roles but appear in original radio plays on such anthology series as Academy Award Theatre, The Cavalcade of America, Family Theatre, The Hallmark Hall of Fame, The Lux Radio Theatre, The Radio Reader’s Digest, Screen Director’s Playhouse, The Silver Theatre, and The Theater of Romance. Stewart also appeared on The Screen Guild Theatre under its three separate sponsors—Gulf, Lady Esther, and Camel—and along with Orson Welles, led an all-star cast for one of the medium’s most memorable broadcasts, Norman Corwin’s We Hold These Truths…first heard over Mutual Radio on December 15, 1941.

Film critic and historian Leonard Maltin observed in his old-time radio reference The Great American Broadcast that James Stewart “brought the same conviction to every radio performance that he did to his classic screen roles.” Veteran radio performer Dick Beals was in agreement, noting Stewart “was a total professional as a radio actor and never tried to draw attention to himself as the star.” Indeed, many a Hollywood thesp was unable to say “Hello” into a mike without flubbing the line. Stewart’s talent was never more evident than his tour-de-force turn in a classic Suspense episode, “Mission Completed” (12/01/49). Jimmy plays Tom Warner, a paralyzed veteran whose life in a V.A. hospital has been a living hell for four years until the day he recognizes a man working at a florist’s as the same Japanese officer who presided over his torture in a P.O.W. camp. It’s a definite nail-biter.

With such standout appearances on Suspense like “Consequence” (05/19/49) and “The Rescue” (04/19/51), it wasn’t long before the idea of a radio series starring James Stewart began to be kicked around among radio executives. Stewart appeared on an April 13, 1952 broadcast of Hollywood Star Theatre (a show that stood out amongst its anthology brethren and sistren in presenting original, half-hour suspense plays with Hollywood’s finest talent) in a production entitled “The Six Shooter,” which many critics felt was one of the program’s high spots. The actor was then talked into doing an audition record (dated July 15, 1953), which impressed NBC so much that they scheduled the show in the fall of that year, with creator Frank Burt in charge of scripting and Jack Johnstone (Yours Truly, Johnny Dollar) in the director’s chair. The call went out to the distinguished performers that comprised “Radio Row”; veteran actors such as Howard McNear, Herb Vigran, Bill Johnstone, William Conrad, Shirley Mitchell, and Eleanor Audley were among the many to play supporting roles in the enterprise.

“The man in the saddle is angular and long-legged,” went The Six Shooter’s opening. “His skin is sun-dyed brown…the gun in his holster is gray steel and rainbow mother-of-pearl, its handle unmarked. People call them both ‘The Six Shooter.’” James Stewart played Britt Ponset, an easy-going drifter who encountered an assortment of oddball characters in his various adventures traveling through the West. Shooter functioned as an anthology (with only Britt Ponset as its constant), presenting tales of drama and adventure…and demonstrating an occasional lighter side as well.

It’s mindboggling to think that this splendid show lasted only a single season on NBC (a total of thirty-nine half-hours, not including the audition and the initial Hollywood Star Theatre broadcast). Sad to say, it was at a point during The Golden Age of Radio when the medium was being shoved off the center stage by its attention-grabbing sibling: television. But The Six Shooter might have had a longer run over the airwaves were it not for the fact that the series was being sustained by the network due to the star’s reluctance to allow a cigarette company assume sponsorship. (Stewart was concerned that plugging Chesterfield, the interested party, would be bad for his screen image. The show was briefly sponsored by Coleman Heaters for its first four episodes before NBC wound up picking up the tab.) Interestingly, the series made the eventual transition to the small screen with a new title (The Restless Gun) and star (John Payne, whose character’s name was changed to “Vint Bonner”); that series started out (if you’ll pardon the pun) great guns in its first season but dropped off considerably with the audience in its second and last year on the air.

It’s fitting that James Stewart’s last show business credit was supplying his unmistakable voice for a character in the An American Tail sequel, An American Tail: Fievel Goes West (1991). It was appearing before a microphone again, and the great actor’s voice was finally silenced with his passing in 1997 at the age of 89.