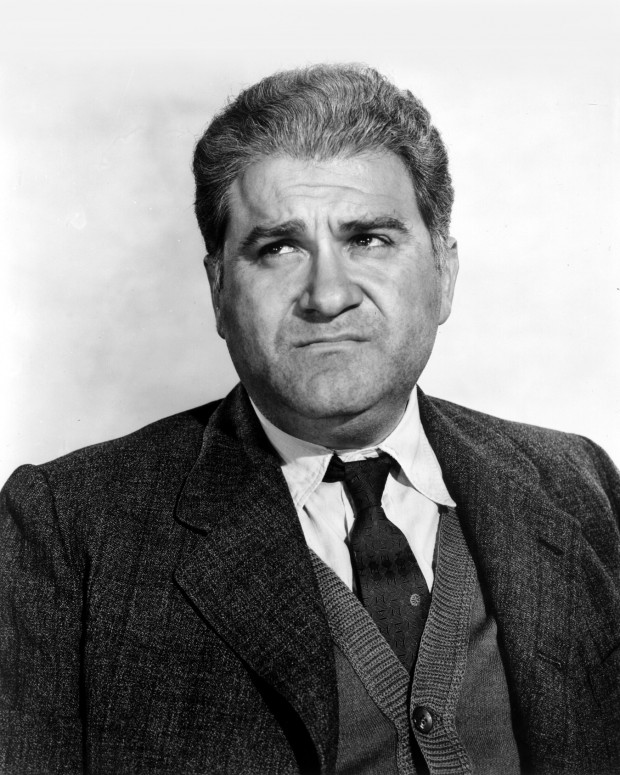 Character great Jack Joseph Kruschen was born in Winnipeg, Manitoba on this date in 1922.  A dues-paying member of the “Hey!  It’s That Guy!” show business fraternity, you’ve seen Jack in scores of films and TV shows.  Modern audiences remember him fondly as George “Papa” Papadopoulos, Sr. from the popular family sitcom Webster, which starred Alex Karras, Susan Clark and Emmanuel Lewis as the titular character.  Kruschen’s wide-ranging film work included an Academy Award nomination as Best Supporting Actor for his performance as Dr. Dreyfuss, the physician neighbor of executive-on-the-move C.C. Baxter (Jack Lemmon) in the Oscar winner for Best Picture, The Apartment (1960).

Old-time radio fans, on the other hand, are much more familiar with Jack’s behind-the-microphone resume. Kruschen hadn’t even graduated from high school when he was regularly performing in radio dramas, and he even appeared on early television broadcasts in Los Angeles during the late 1930s.  He emoted on a number of series produced exclusively for the Armed Forces Radio Service (AFRS) during the war, and used that as a launching pad for jobs on such radio anthology series as The Cavalcade of America, The Lux Radio Theatre, The Hallmark Hall of Fame, Family Theatre, Stars Over Hollywood and Romance.

Jack Kruschen was a very busy radio actor.  His appearances over the ether include such favorites as The Adventures of Philip Marlowe, The Adventures of Sam Spade, The CBS Radio Workshop, I Was a Communist for the FBI, Let George Do It, Night Beat, Richard Diamond, Private Detective, Rocky Fortune, Rogers of the Gazette, Tales of the Texas Rangers, The Voyage of the Scarlet Queen and Wild Bill Hickok.  He also appeared multiple times on Dragnet, Escape, Gunsmoke and Yours Truly, Johnny Dollar.  Perhaps foreshadowing his later television work on sitcoms like Busting Loose and Full House, Kruschen also demonstrated his funny side on radio series such as Fibber McGee & Molly, The Halls of Ivy, Meet Millie, Mr. and Mrs. Blandings, My Little Margie, The Phil Harris-Alice Faye Show and That’s Rich.

Kruschen’s most frequent on-the-air gig was that of Sergeant Muggavan on Broadway’s My Beat, the crime drama series directed and produced by radio’s “Renaissance man”, Elliott Lewis.  Lewis would also avail himself of Kruschen’s services while he was head man on Suspense, as well as on Crime Classics and On Stage.  Even as the Golden Age of Radio was drawing to a close, Jack worked steadily on Fort Laramie, Luke Slaughter of Tombstone, Frontier Gentleman and Have Gun – Will Travel.  Kruschen even participated in attempts to revive radio drama, with showcases on Heartbeat Theatre and Arch Oboler’s Plays in the 1960s, and The Hollywood Star Theatre and The Sears/Mutual Radio Theatre in the decade following.

Jack Kruschen made his motion picture debut in a 1949 Betty Hutton musical comedy, Red, Hot and Blue…and from that moment on began to establish himself as a most welcome character presence on the silver screen just as he had on radio.  Among his more memorable films were Abbott & Costello Go to Mars, The War of the Worlds, Soldier of Fortune, The Night Holds Terror, Cry Terror!, The Buccaneer, The Angry Red Planet, The Last Voyage, Lover Come Back, Follow That Dream and The Unsinkable Molly Brown.  Kruschen is Dave Grafton in 1962’s Cape Fear, the lawyer hired by ex-con Max Cady (Robert Mitchum) to defend him while he continues to terrorize attorney Sam Bowden (Gregory Peck) and his family; he also played Jake Birnbaum, G.W. McLintock’s (John Wayne) chess-playing pal in the 1963 comedy-western McLintock!

Kruschen’s appearances on the radio Dragnet would extend to the television version as well—particularly an unforgettable 1954 outing entitled “The Big Crime,” which was quite groundbreaking in its depiction of the then-taboo-to-TV subject of child molestation.  Jack also notched guest appearances on such series as Zorro, Wanted: Dead or Alive, Bat Masterson, The Rifleman, Batman, Bonanza and Ironside.  He briefly appeared as Tully the bartender on the short-lived 1960-61 series Hong Kong, which starred Rod Taylor.  Jack Kruschen died at the age of 80 on April 2, 2002.