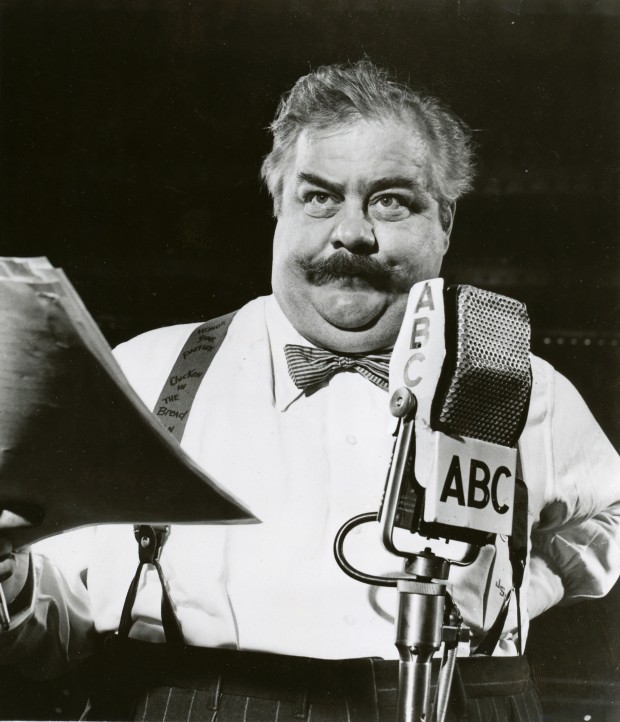 While two of the radio programs based on characters created by author Dashiell Hammett—The Adventures of the Thin Man and The Adventures of Sam Spade—were adapted from his novels, The Fat Man was created by Dash specifically for the medium.  (There is one school of thought that suggests Brad Runyon, the big man himself, was loosely based on Hammett’s “Continental Op” stories.)  The Fat Man enjoyed a successful but short-lived run over the airwaves; it was cancelled by ABC on September 26, 1951 due to sponsor pressure over Hammett’s perceived political sympathies.  That forced its star, J. Scott Smart—born on this date in 1902 in Philadelphia—into another line of work.

Even if J. Scott could no longer play radio’s favorite corpulent sleuth (well, along with Nero Wolfe, of course) he still had the stage and movies to fall back on.  But after a last TV appearance in an installment of Robert Montgomery Presents, the actor decided to end his career in the footlights.  Off-mike, Smart lived a rather Spartan existence: he hung his hat in a fisherman’s hut on the coast of Maine and commuted to New York for the broadcasts while The Fat Man was still on the air.  He enjoyed painting seascapes and sculpting, and was considered quite a cook (though I suppose that goes without saying); his wife was once quoted in a Radio Mirror article as saying that the chef’s specialty was “clam spaghetti, New England style.”

Smart—“Jack” to his friends and colleagues—discovered a talent early on for art, music and dance…qualities that discouraged him from joining the Navy.  He opted for a show business career when his father gave him a set of drums just as he was getting out of high school in Buffalo, NY.  “That set of drums changed me from a normal human being into an entertainer,” Smart later observed.  He worked a while in a band, and then developed a flair for the buskin, traveling with a Buffalo theatrical stock company around New England and New York for a number of years.  Jack had also dabbled in radio while living in Buffalo, and in 1929 decided he was ready for the big time in the Big Apple.  Smart began landing gigs on network programs, and he was well on his way.

Jack displayed a versatility over the ether that allowed him to work alongside comedians like Fred Allen, Jack Benny and Bob Hope, and on dramatic shows including The Lux Radio Theatre and The Cavalcade of America.  Smart was quite adept at character parts in radio, earning him the nickname “the Lon Chaney of Radio.”  From 1942 to 1944, Jack played a windy politician on Fred Allen’s Texaco Star Theatre who answered to “Senator Bloat”—the character would gradually give way to the more famous garrulous politico of the Allen program, Senator Beauregard Claghorn (played by Kenny Delmar).

It was on January 21, 1946 that J. Scott Smart began his most famous gig—voicing the anonymous detective known as “The Fat Man” over ABC Radio.  The portly shamus started out with no name, though it was later revealed that the handle on his investigator’s license was “Brad Runyon.”  The series began as a sustained program, but would later be sponsored—it was kismet, no question about it—by the Norwich Pharmaceutical Company, best known for Pepto-Bismol (“When your stomach’s upset/Don’t add to the upset…”).  The Fat Man also featured one of radio’s most unforgettable openings:

WOMAN: There he goes into that drugstore…he’s stepping on the scale…

Bernard Green’s “Fat Man Theme” would then get underway, as fans listened intently to another tale of P.I. Runyon investigating another murder (or as Smart himself pronounced it with his one-of-a-kind rumble, “murrr-derrr”).  The fictional Runyon topped the scales at 237, but his real-life counterpart weighed a bit more at 270.  Still, for a man of his girth, J. Scott Smart was incredibly light on his feet—a number of photographs from the era show him jitterbugging with celebrities like Julie London and Hedda Hopper.

The popularity of the program prompted Universal to produce a feature film with Smart in his radio role in 1951; because the vehicle was also a tryout for a studio up-and-comer named Rock Hudson, television listings would later have fun with the movie when it became a Late, Late Show staple (“Rock Hudson as the Fat Man”).  Jack had a fairly impressive cinematic resume, with bit roles in such classics as Three Smart Girls, One Hundred Men and a Girl and Kiss of Death, and he appeared in a number of Broadway productions including A Bell for Adano, Waiting for Godot and The Pirates.  But his turn in the 1951 film didn’t win him many critical plaudits (one wag remarked that the actor “was better behind the microphone than in front of the camera”) and so he headed back to his home in Ogunquit.  J. Scott Smart died of pancreatic cancer at the age of 57 on January 15, 1960.