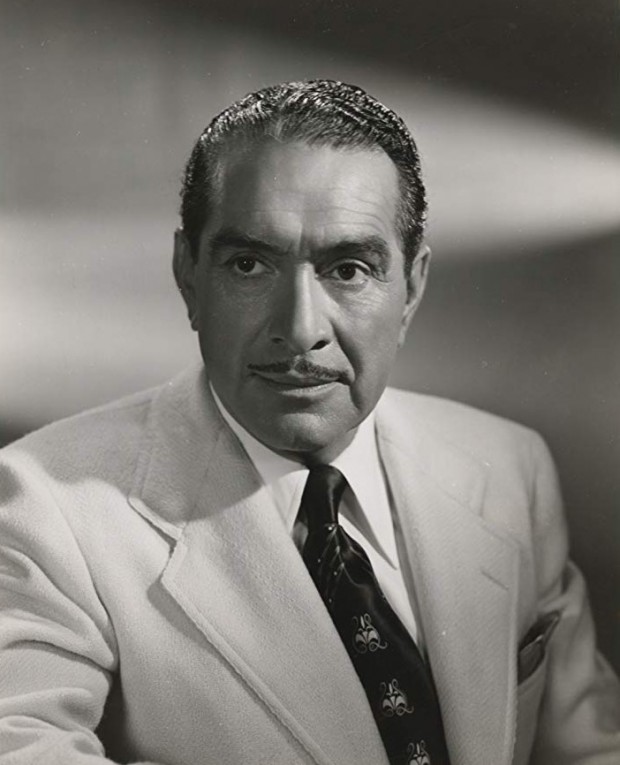 At the beginning of each weekly broadcast of the radio sitcom Life with Luigi, the program’s announcer would introduce Luigi star J. Carrol Naish as “that celebrated actor.”  Truer words were never spoken; Naish’s lengthy show business career found him employed on stage, in movies, and on radio and TV.  J. Carrol was a master of dialects, and portrayed a variety of characters of every ethnicity…except Irish…which he actually was. Born Joseph Patrick Carroll Naish in New York City in 1896, his talent for foreign accents would earn him the nickname of “Hollywood’s one-man U.N.”

So how is it that J. Carrol Naish rarely portrayed an Irishman?  “When the part of an Irishman comes along, no one ever thinks of me,” the actor once explained.  But Naish was truly a son of the Auld Sod; his father Patrick had emigrated to the U.S. in 1890 from County Limerick and was the nephew of John Naish, Ireland’s Lord Chancellor.  For young J. Carrol, however, it was an actor’s life for him—he took his first steps under the footlights as a member of Gus Edwards’ renowned kiddie troupe in vaudeville.  Educated at St. Cecilia’s Academy, Naish quit school at the age of 16 to join the U.S. Navy…and after deserting that branch to join the Army, eventually saw action with the Signal Corps in World War I.  He later traveled the world with the Merchant Marine, which allowed him to work on acquiring dialects and obtain a knowledge of languages (he spoke six fluently).

According to legend, J. Carrol Naish started to make inroads on the stage in 1925 as a member of Molly Picon’s Yiddish Theatre—where his Jewish dialect was so convincing that a rabbi confronted him backstage and scolded him for not attending synagogue.  Naish got his first taste of stage success as a member of a national touring company for a 1926 production of The Shanghai Gesture, and would later appear in such Broadway plays as The Crooks’ Convention (1929) and A View from the Bridge/A Memory of Two Mondays (1955).  J. Carrol would obtain far more exposure on the silver screen, beginning with an uncredited role as a French soldier in 1926’s What Price Glory?  His prolific movie career began around the advent of talkies and would result in appearances in close to 200 films.

Naish’s forte in his early movie career was portraying gangsters…which he did in such features as Gun Smoke (1931), The Mouthpiece (1932), and The Beast of the City (1932).  The actor gave memorable performances in films like The Lives of a Bengal Lancer (1935), Captain Blood (1935), Anthony Adverse (1936), The Charge of the Light Brigade (1936), and Beau Geste (1939), balancing out his work in “A” pictures with journeyman jobs in second features (Charlie Chan at the Circus, Think Fast, Mr. Moto, etc.).  His portrayal of a captured Italian soldier in the Humphrey Bogart feature Sahara (1943) earned him an Academy Award nomination for Best Supporting Actor, and J. Carrol garnered a second nom in the same category for playing the father of the titular character of A Medal for Benny (1945).  Horror movie mavens fondly remember Naish for his portrayal of the sympathetic hunchback Daniel in House of Frankenstein (1944); he also appeared in the first entry of Columbia’s film franchise based on radio’s The Whistler (and two of Universal’s “Inner Sanctum” programmers as well).

Carrol Naish’s heralded work in vehicles like The Southerner (1945), Humoresque (1946), and The Fugitive (1947) was supplemented with radio appearances on such shows as The Camel Screen Guild Theatre, Family Theatre, G.I. Journal, The Kraft Music Hall, The Lux Radio Theatre, and Suspense.  The show that would make Naish a household name, however, was Life with Luigi—a situation comedy that premiered over CBS on September 21, 1948.  J. Carrol played Luigi Basco, a newly-arrived Italian immigrant to these shores whose attempts to achieve the American Dream with his own antiques business were occasionally stymied by his sponsor—a scheming restaurateur named Pasquale, portrayed by actor Alan Reed.  Pasquale never missed an opportunity to remind his friend that Luigi owed much to Pasquale’s generosity in helping him get established in his new country…and all Pasquale wanted in return was for Luigi to walk down the matrimonial aisle with his hefty daughter Rosa (Jody Gilbert).  A solid hit for CBS for six seasons, Life with Luigi’stransition to TV hit a snag when its sponsors became concerned about the series’ broad Italian stereotypes.  The TV version of Luigihad a relatively short run.

While Luigi was convulsing radio audiences weekly, J. Carrol Naish continued to appear in silver screen favorites such as Annie Get Your Gun (1950), Rio Grande (1950—Naish actually plays an Irishman in this one, Lieutenant General Philip Sheridan), Clash By Night (1952), Sitting Bull (1954), Beneath the 12-Mile Reef (1954), Violent Saturday (1955), and New York Confidential (1955). (J. Carrol Naish’s rich, resonant voice also allowed him to narrate such films as 1952’s The Story of Will Rogers and The Miracle of Our Lady of Fatima.)  His work on the TV Luigi and appearances on shows like General Electric Theatre and Lux Video Theatre spurred an interest in the small screen, and in 1957 Naish undertook a high-profile TV gig as the star of the syndicated The New Adventures of Charlie Chan.  More television work followed—a supporting role as Hawkeye on the ABC-TV sitcom Guestward Ho (1960-61), and guest appearances on favorites like Wanted: Dead or Alive, The Restless Gun, The Untouchables, Wagon Train, and Route 66.  Ill health forced the actor to retire in 1970—his final movie role was in Dracula vs. Frankenstein, released in 1971—and Naish passed away in 1973 at the age of 77.