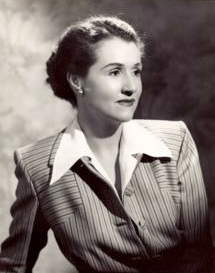 I’d never be able to prove it in a court of law…but I’d be willing to gamble that when the need arose for an actress to play the part of a spinster or neighborhood busybody, Irene Tedrow was on everyone’s speed dial. (Okay, I just remembered that they didn’t have speed dial back then—that might explain why I’d have difficulty with my court case.) Tedrow, born in 1907, enjoyed a rewarding stage and screen career—not to mention radio and TV—as one of the go-to people for matronly roles. Fittingly, in the twilight of her career, she would move on to playing grandmotherly types as well.

It wasn’t always this way, of course. Though born in Denver, CO, Irene attended Carnegie Tech in Pittsburgh, PA and earned a Bachelor of Arts degree in drama in 1929. With that, Tedrow actively pursued a stage career as an ingenue, appearing frequently at Los Angeles’ Mark Taper Forum and San Diego’s Old Globe Theater (of which she was a founding member). She was the recipient of much acclaim at another Old Globe venue in 1934—this time at Chicago’s World Fair, where she performed the roles of eighteen Shakespearean heroines in tandem with the Maurice Evans Company. Irene never fell out of love with the stage, acting in such productions as Our Town (which also featured Oscar-winning actor Henry Fonda at the Plumstead Playhouse). Pygmalion, and The Hot L Baltimore.

Becoming a member of Orson Welles’ Mercury Theater opened a lot of doors in radio for Irene Tedrow. She would work with such radio legends as Norman Corwin and Arch Oboler (appearing on Oboler’s Lights Out, Plays for Americans and his self-titled Plays series), and had parts on such dramatic anthologies as All-Star Western Theatre, California Caravan, The Cavalcade of America, Family Theatre, Favorite Story, Great Plays, The Lux Radio Theatre, NBC Presents: Short Story, Romance, and Screen Directors’ Playhouse. Tedrow’s radio resume also includes guest appearances on the likes of The Adventures of Philip Marlowe, The Adventures of the Saint, The CBS Radio Workshop, Defense Attorney, Dragnet, Escape, Gunsmoke, Have Gun – Will Travel, Let George Do It, The Line Up, Mr. President, Night Beat, Pursuit, Rogers of the Gazette, The Whistler, Wild Bill Hickok, and Yours Truly, Johnny Dollar. In addition, Irene was a favorite of “Mr. Radio,” director-producer-actor Elliott Lewis, acting frequently on the Lewis-produced Broadway’s My Beat, Crime Classics, On Stage, and Suspense.

Irene Tedrow had regular roles on daytime dramas like Aunt Mary (as Jessie Calvert) and The Gallant Heart (as Captain Julia Porter), and played opposite Donald Crisp (and later Gale Gordon) on the 1946 newspaper drama Jonathan Trimble, Esquire. She was Dorothy Regent, sister of Chandu the Magician, when that character was revived for an ABC series in 1948. But Tedrow’s most enduring radio gig was playing Janet Archer, the mother of the titular heroine in the sitcom Meet Corliss Archer; after taking over from Gloria Holden less than a month into the series, Irene would play Janet until the show left the air in 1956. Not only did this give Tedrow experience to appear on other sitcoms like Life with Luigi and My Friend Irma, but it allowed her to transition to the brief TV version of Archer in 1952 (though once again, she waited for another actress—Freida Inescort—to hand over the role before taking over).

On the silver screen, Irene Tedrow appeared in close to fifty feature films—often uncredited, but she graced such classics as Cheers for Miss Bishop, The Moon and Sixpence, Journey Into Fear, The Strange Affair of Uncle Harry, They Won’t Believe Me, Thieves’ Highway, The Company She Keeps, A Lion is in the Streets, Not as a Stranger, Loving You, Saddle the Wind, Never So Few, Please Don’t Eat the Daisies, The Parent Trap, and The Cincinnati Kid. (Tedrow is purportedly—according to the IMDb—an extra in 1956’s The Ten Commandments; I invite you to look at the movie next Easter and see if you can pick her out.) Irene’s work on the TV version of Meet Corliss Archer would also make her a much in-demand character actress on the small screen, with appearances on such classic series as Dragnet, The Millionaire, December Bride, Rawhide, Maverick and Alfred Hitchcock Presents.

Tedrow’s most prominent television role was that of Ms. Lucy Elkins—one of several neighbors to the hellion known as Dennis the Menace in the 1959-63 TV sitcom based on the comic strip character created by Hank Ketcham. Ms. Elkins functioned as the disapproving nemesis of “good ol’” Mr. Wilson (Joseph Kearns, Gale Gordon), and no doubt enjoyed working again with her old-time radio colleagues Kearns, Gordon and Mary Wickes (who played Miss Esther Cathcart). Throughout the 1960’s, Irene flourished in guest appearances on such iconic series as The Twilight Zone, Perry Mason, The Andy Griffith Show, The Fugitive, and Peyton Place.

In the 1970s, Irene Tedrow would receive recognition from her peers with two Emmy Award nominations. The first was for portraying future First Lady Eleanor Roosevelt’s grandmother, Mary Ludlow Hall, in the 1976 TV movie Eleanor and Franklin (Outstanding Single Performance by a Supporting Actress in Comedy or Drama Special). Two years later, Irene was nominated again for a guest appearance (Outstanding Lead Actress for a Single Appearance in a Drama or Comedy Series) on the short-lived teen drama James at 15. Tedrow continued her TV work on shows like St. Elsewhere and L.A. Law, but a stroke she suffered in 1989 curtailed any future small screen work, and she passed away in 1995 at the age of 87.