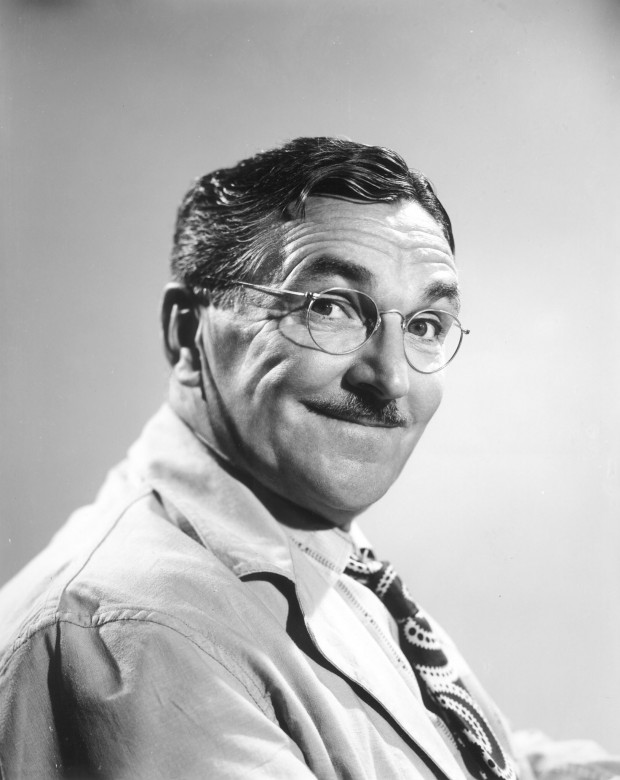 In the fictional town of Mayberry, North Carolina—as seen on the popular situation comedy The Andy Griffith Show—the locus of the town’s goings-on was usually the humble barber shop run by garrulous Floyd Lawson.  Floyd, a fey, gentle soul who looked at the world around him with a sense of awe and bewilderment, would become one of the show’s most endearing characters…and his presence would be sorely missed when the actor who played Floyd left the series at the end of the 1966-67 season.  He’s also today’s birthday boy: the wonderful Howard McNear.

Howard was a Los Angeles native, born in 1905.  His early acting career started on stage in a San Diego stock company, shortly after his graduation from the Oatman School of Theater.  McNear, however, developed an interest in radio and began active appearances in the medium.  He began with syndicated series like The Shadow of Fu Manchu, The Cinnamon Bear (he was Samuel the Seal) and The Count of Monte Cristo. Howard eventually made the rounds of network series such as The Lux Radio Theatre and The Cavalcade of America.

Howard McNear would demonstrate an amazing versatility in the aural medium.  The actor had recurring roles on such series as The Adventures of Bill Lance, The Casebook of Gregory Hood, The Gallant Heart and Romance of the Ranchos.  Howard also frequently appeared on the “big three” (Escape, Suspense and The Whistler) and gave first-rate performances on comedy programs (Our Miss Brooks, Burns and Allen), crime dramas (The Adventures of Sam Spade, The Line Up, Yours Truly, Johnny Dollar), and westerns (The Six Shooter, Fort Laramie).

The greatest radio western of them all, Gunsmoke, would be his bread-and-butter from its premiere in April of 1952 to its sign-off in June of 1961.  Howard brought the character of “Doc” to life from the very first episode as a man delighted by the thought of all the money he stood to collect from the number of men Marshal Matt Dillon sent to Boot Hill.  William Conrad, who played Dillon, was so tickled by McNear’s wickedly ghoulish take on the character that he suggested Doc’s real name be “Dr. Charles Adams”—a reference to macabre cartoonist Charles Addams.  (As the series progressed, Howard was able to flesh out the grumpy medico, even giving him a backstory in which his presence in Dodge was explained by a tale involving a woman he fought a duel over in Virginia.)

While McNear worked at his Gunsmoke job, he began making appearances in feature films.  His big screen debut came in the 1953 western Escape from Fort Bravo.  Howard’s movie roles include memorable bits in Bell, Book and Candle (1958), Anatomy of a Murder (1959), Voyage to the Bottom of the Sea (1961), Blue Hawaii (1961), The Wheeler Dealers (1963) and The Fortune Cookie (1966).  The actor also made the rounds on television: he had a recurring role on George and Gracie’s show as Mr. Jansen, the plumber, and also did guest appearances on December Bride, The People’s Choice, The Jack Benny Program, The Real McCoys, Peter Gunn, The Many Loves of Dobie Gillis and The Twilight Zone.  Sadly, although Howard auditioned for the role of Doc Adams on the TV version of Gunsmoke he lost out to Milburn Stone…who emoted as Doctor Galen Adams for practically the entirety of that western’s twenty-year-run on the tube.  Still, he did guest-star on the program a number of times, portraying different characters and as charming as ever.

But, as previously mentioned, McNear is best remembered as Mayberry’s resident tonsorial artist—a part he started to play mid-season during the show’s first year, and would continue to do so until the middle of The Andy Griffith Show’s third season.  McNear suffered a severe stroke at that time and, while he was able to recover his speech, he was rendered immobile by the incident.  So, upon his return fifteen months later, Howard’s Floyd seldom moved beyond his barber chair; he would either be seated, or standing alongside (supported by a brace).  This allowed the actor to continue his role as the philosophical stylist.  Eventually, Howard became frustrated with the difficulty of remembering his lines and left the program in its eighth season.  Howard McNear passed away on January 3, 1969 at the age of 63, and was mourned by everyone who had ever worked with him.  His friend Parley Baer (Chester on Gunsmoke) described him as “the dearest man—there was just nobody who didn’t like him.