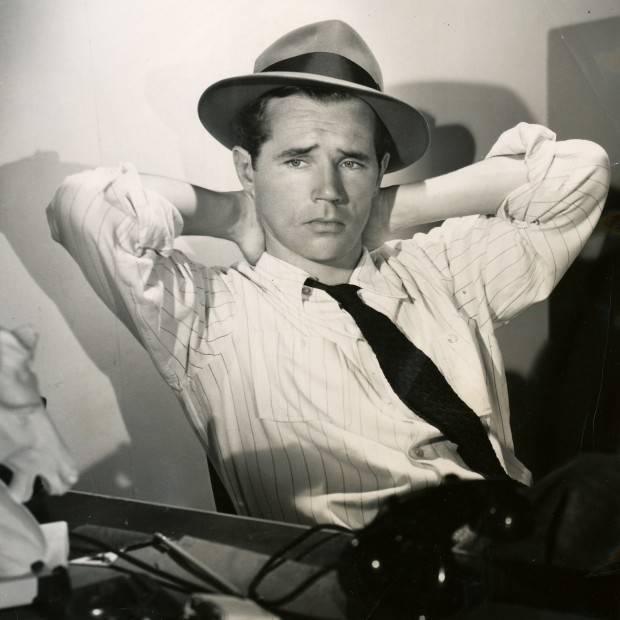 Have you ever wondered why a lot of the announcers from the AFRS versions of your radio favorites sound like Howard Duff?  The answer to this is devastatingly simple: it is Howard Duff!  The actor entered the U.S. Army Air Corps as World War II got underway and, after a brief stint in the infantry, Howard was soon transferred to AFRS on the strength of an acting-announcing career that he pursued before “doing his bit.”  In a 1975 interview with old-time radio author/historian Chuck Schaden, Duff was very proud that both he and “Mr. Radio”—Elliott Lewis—played an integral role in shaping AFRS’ programming.  “We took all the best commercial shows off the air and then we had to take all the commercials out and certain editing references and then reassemble them,” he explained.  The actor who would later achieve radio immortality as “the greatest private detective of them all” was born Howard Green Duff in Charleston (now Bremerton), Washington on this date in 1913.

Howard Duff’s future career as a thespian took root only after he had been cut from Roosevelt High School’s basketball team.  Before graduating in 1932, Duff performed in various school plays…and his love of acting soon encouraged him to join a theatrical troupe at the Seattle Repertory Playhouse.  In the evening hours, he rehearsed the likes of Ibsen and Chekov—while paying the rent by working days in a department store.  He then landed a job at Seattle’s KOMO doing news and “everything,” then later gravitated to San Francisco to do more of the same.  He worked for two years on a local kids’ program entitled The Phantom Pilot (which later moved to Hollywood), and then found a good deal of freelance work after that on Big Town and The Screen Guild Theatre.  After five years in the armed services, Howard was ready to get back in the radio game.

Duff soon found himself in great demand performing on “radio’s outstanding theatre of thrills”—Suspense—and he had developed a good working relationship with the show’s director-producer, William Spier.  So, when Spier was planning a series based on the Sam Spade character from the Dashiell Hammett novel The Maltese Falcon, Howard decided to audition.  The legend goes that Bill Spier wasn’t particularly sold on Duff as Spade—he only agreed to give Howard the gig after Mrs. Spier (Kay Thompson was his wife at the time) persuaded the director-producer that Howard was the one.  The Adventures of Sam Spade, which premiered over ABC Radio on July 12, 1946, would soon make Howard a radio favorite—even though he had other shows on his extensive resume, including The Amazing Mr. Malone, The Cavalcade of America, Encore Theatre, Favorite Story, Mr. President, The Philip Morris Playhouse, and The Whistler.

Howard’s duties as Sam Spade kept him busy in radio—still, he always seemed to find time to poke fun at his hard-boiled character by guest starring on such shows as The Life of Riley and Sara’s Private Caper, and joshing alongside big names like George Burns & Gracie Allen, Jack Carson, Bing Crosby, Joan Davis, and Rudy Vallee.  It wasn’t too surprising to learn that Howard Duff had a lighter side…because The Adventures of Sam Spade was a program that never took itself too seriously; Duff’s chemistry and badinage with co-star Lurene Tuttle (as Sam’s loyal secretary Effie Perrine) would be right at home in any screwball comedy movie.  Sam Spade had moved to CBS in the fall of 1946, and was a solid performer there for three years, until it switched over to NBC in October of 1949.

Then, storm clouds began to appear on the horizon.  The Adventures of Sam Spade suffered a serious blow when Dashiell Hammett, the creator of the insouciant gumshoe, started to attract the attention of the House Un-American Activities Committee. His named had surfaced in the notorious publication Red Channels…as had Duff’s. (The reason for this always puzzled the actor— “I was just kind of a half-liberal!”)  NBC cancelled the program in September of 1950, but a letter-writing campaign was responsible for bringing it back two months later (with actor Steve Dunne replacing Howard as Spade).  Duff tried to apply paddles to his radio career with an audition for a series called The McCoy (a sly wink at the fact that another actor was playing the role that made Howard famous) but there were no takers.

The terrible thing about Howard Duff’s blacklisting is that it put a temporary hold on his movie career, which began with a standout performance in the 1947 noir classic Brute Force.  Howard was even billed as “Radio’s Sam Spade” in this film, directed by Jules Dassin who was later a victim of the blacklist as well.  Jules used him again in his 1948 feature The Naked City.  Duff’s film career at that time was en fuego; he had roles in such features as All My Sons (1948), Red Canyon (1949), Illegal Entry (1949), Calamity Jane and Sam Bass (1949), Johnny Stool Pigeon (1949), and Shakedown (1950), to name just a few.  The actor was only able to beat the blacklist by taking some advice from his agent: “I just did any show they threw at me.”

Howard’s marriage to actress-director Ida Lupino in 1951 would also provide the necessary shot-in-the-arm to resurrect his career; the husband-and-wife duo made five pictures together—Women in Hiding (1950), Jennifer (1953), Private Hell 36 (1954), Women’s Prison (1955), and While the City Sleeps (1956).  Howard and Ida also headlined a sitcom entitled Mr. Adams & Eve; the series—about a husband-and-wife acting duo—ran from January 1957 to July 1958, and was created/produced by Collier Young (Ida’s second hubby).  Duff was starting to become more and more a familiar small screen face with guest shots on the likes of Bonanza, Combat!, and The Twilight Zone.  In the 1960-61 season, he starred in Dante, an hour-long drama about an ex-gambler running a San Francisco nightclub (Dick Powell had previous played the character in several installments of the TV anthology Four Star Playhouse).

Howard Duff’s biggest television success was his three-season stint as Detective Sam Stone on ABC’s The Felony Squad—a series that also starred former Dragnet detective Ben Alexander and newcomer Dennis Cole.  The actor continued making the rounds on the likes of The Virginian, Medical Center, The Mod Squad and other iconic television shows from that era, occasionally grabbing plum assignments in movies like The Late Show (1977; perfect as Art Carney’s ex-partner) and Kramer vs. Kramer (1979; as Dustin Hoffman’s lawyer).  He played the part originated by Sydney Greenstreet in the 1949 film Flamingo Road for a 1981-82 TV show based on the movie, and guested on such series as Dallas, Magnum, P.I., and Knots Landing (he had a recurring role as Paul Galveston).  Howard’s last credit before his passing in 1990 was in Too Much Sun, directed by Putney Swope’s Robert Downey, Sr.