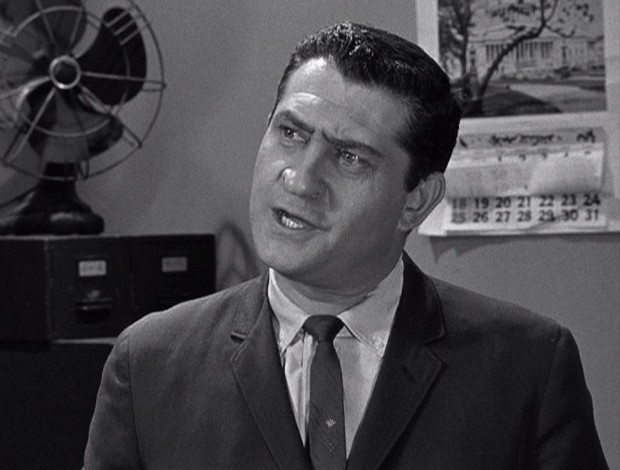 Herb Ellis, born Herbert Siegel in Cleveland, OH on this date in 1921, was a longtime collaborator with Dragnet actor-director-producer Jack Webb. In fact, it was once recalled in an interview that the police procedural, lauded for revolutionizing crime drama in both radio and television, was mapped out on Ellis’ kitchen table. (Jack and Herb wanted to sell the idea to television as Joe Friday, Room Five—but their small screen efforts would have to take a detour towards a radio microphone first.)

Ellis began his radio career as an announcer, presiding over many a jazz band remote (broadcast under the aegis of One Night Stand). He would eventually land work at San Francisco’s KGO…a station where Jack Webb also found employment. Ellis worked with Webb on Jack’s Pat Novak for Hire, both during its KGO years and its brief run on the ABC network. Herb could also be heard on Jeff Regan, Investigator, on which Jack played the titular gumshoe. But Herb really became indispensable on Dragnet, becoming a solid member of Jack Webb’s “stock company” of performers, hewing to the creator’s insistence on realism. (In Leonard Maltin’s The Great American Broadcast, Ellis recalled that he had reservations about Webb’s style of monotone acting on the series. “He was so vertical in the way he wanted everyone to play,” reminisced Herb, “that I felt there was no humanness, because we all talked the same way. Why it struck America and struck a chord, I don’t know, but it did.”) Ellis was the first actor to portray Officer Frank Smith, which he did for eight episodes in the TV transplant before being replaced by radio veteran Ben Alexander. Herb later had a co-starring role (as Frank La Valle) on the Jack Webb-produced series The D.A.’s Man in 1959. In 1967, when Dragnet was revived for NBC, Ellis made appearances on that as well.

However, to suggest that Herb Ellis owed his long career to a fruitful association with Jack Webb would be doing the actor a tremendous disservice. Herb’s work on Dragnet shouldn’t overshadow the fact that he was in high demand as a radio actor, working on other crime dramas such as The Adventures of the Saint, Barrie Craig, Confidential Investigator, Broadway’s My Beat, Jason and the Golden Fleece, The Line-Up, Mike Malloy, Private Cop, Night Beat, Richard Diamond, Private Detective, Tales of the Texas Rangers, and This is Your FBI. Ellis was even a member of the “revolving door” fraternity that took a crack at satisfying star Sydney Greenstreet’s standards for an actor to play sidekick Archie Goodwin on The New Adventures of Nero Wolfe (unfortunately for Herb, the gig lasted for one solitary broadcast). Ellis’s radio resume also includes Dangerous Assignment, Dr. Christian, Escape, Family Theatre, Fibber McGee & Molly, Frontier Gentleman, Gunsmoke, The Hallmark Hall of Fame, Hallmark Playhouse, The Halls of Ivy, The Lux Radio Theatre, The NBC Star Playhouse, Rocky Fortune, Rogers of the Gazette, Romance, The Six Shooter, The Story of Dr. Kildare, Suspense, The Whisperer, Wild Bill Hickok, and Yours Truly, Johnny Dollar. Even after the casket belonging to Radio’s Golden Age had long been lowered into the ground, Herb Ellis worked on the shows that nobly wanted to keep radio drama alive including Heartbeat Theatre, Horizons West, and The Sears/Mutual Radio Theatre.

When radio was “down on its uppers,” Herb turned to television to make a living, and found that his talents as a character actor were welcomed by a number of shows that signed him on as a semi-regular. On Peter Gunn, he played a character named “Wilbur”—who owned a bistro and did a little sculpting on the side. He was “Dr. Dan Wagner” on the Jackie Cooper comedy-drama Hennesey, and “Lou Porter” on the short-lived Peter Loves Mary. Ellis made guest appearances on such television classics as Alfred Hitchcock Presents, The Andy Griffith Show, Bewitched, The Fugitive, M Squad, The Many Loves of Dobie Gillis, My Favorite Martian, and Perry Mason. On the silver screen side of the Ellis resume, we have such movies as Rogue Cop (1954), Naked Alibi (1954), The Killing (1956), The Fortune Cookie (1966), What Did You Do in the War, Daddy? (1966), and The Party (1968)—not to mention the Jack Webb feature film Pete Kelly’s Blues (1955) and the big-screen version of Dragnet in 1954.