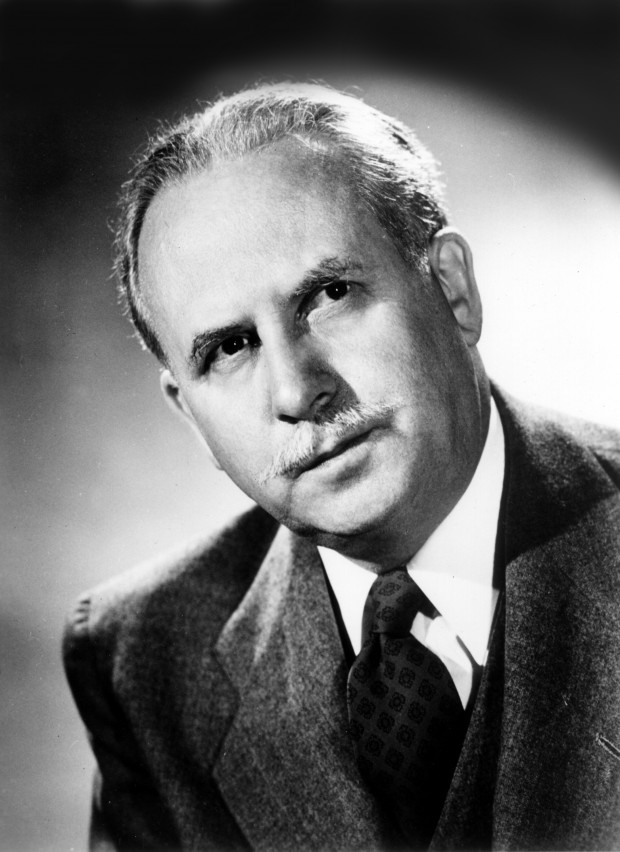 Today’s birthday celebrant—born in Providence, Rhode Island in 1895 —may not possess the cachet of other character actors from Radio’s Golden Age, as his resume didn’t extend beyond a handful of feature films and television shows.  But, Herbert Butterfield had a distinctive voice that is easily recognized by old-time radio fans; he made appearances on shows featuring Jack Webb (Dragnet, Pat Novak for Hire) and landed high profile roles on series as disparate as Dangerous Assignment and The Halls of Ivy.

Herb’s early radio jobs came about in various East Coast melodramas and daytime serials during the mid-1920’s, when the medium was in its infancy.  By the 1930’s, Butterfield had established himself as a reliable radio performer, with regular showcases on Chicago-based programs like Jack Armstrong, Kitty Keene, Inc. and Wayside Theatre—he even branched out into directing such broadcasts as The Story of Mary Marlin.  The actor then relocated to California in the 1940s, where he found continuing work on programs such as Suspense, Author’s Playhouse, Lights Out, The Whistler, The Lux Radio Theatre, Escape and Favorite Story.  He emoted opposite Lawrence Dobkin on ABC’s Ellery Queen in the 1947-48 season, playing Pop (Inspector Queen) to Larry’s sleuth.

As previously noted, Herb was good friends with radio auteur Jack Webb; he had small roles on Webb’s short-lived Johnny Modero, Pier 23 and was the first actor to play Anthony J. Lyon, boss of Jeff Regan, Investigator (Jack played the titular gumshoe).  Herb’s range—he could either play a world-weary detective or grizzled tough—got him work on other popular crime dramas at that time, including Broadway’s My Beat, The Lineup, Let George Do It and Yours Truly, Johnny Dollar.  Butterfield made multiple appearances on prestigious programs like Mr. President, Crime Classics, On Stage and The CBS Radio Workshop, and displayed a flair for comedy on the likes of The Great Gildersleeve, Fibber McGee & Molly, That’s Rich and The Phil Harris-Alice Faye Show.

One of Herb’s best known radio roles was on one of the medium’s fondly remembered sitcoms.  On The Halls of Ivy, Butterfield played the irascible Clarence Wellman, a board member at the college where William Todhunter “Toddy” Hall (Ronald Colman) was president.  At the same time, Herb was a regular on Dangerous Assignment—a vehicle for actor Brian Donlevy that featured him as special agent Steve Mitchell, globetrotting to various hot spots in order to encounter adventure and intrigue.  Butterfield played “the Commissioner,” Mitchell’s superior who was in charge of handing out his (dangerous) assignments; he didn’t have a first or last name on the show but he did make the transition to the TV version in 1952.  (Butterfield also reprised his Clarence Wellman character on Ivy when it briefly appeared on the boob tube for a season in the fall of 1954.)

Other TV shows on which Herb guested included Father Knows Best, Dragnet, The Millionaire, Lassie and You are There.  Sharp-eyed movie buffs will be able to spot him in features such as Never Fear, The House on Telegraph Hill, Shield for Murder and The Ten Commandments.  His career was cut short in 1959 when he passed away at the age of 64, with his last TV appearance—an episode of Colgate Theatre (“Welcome to Washington,” with Claudette Colbert)—in September of 1958.