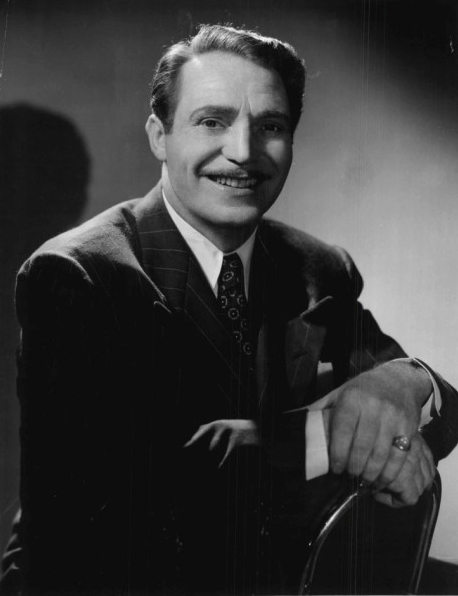 The actor who achieved his greatest fame on radio as the best foil Fanny Brice’s Baby Snooks could ever wish for was born on this date in 1899 as Alfred John Austin. His birthplace of Hanley in Staffordshire provided all the inspiration he would need for his chosen stage name: Hanley Stafford.

Hanley and his parents immigrated to Winnipeg, Canada in 1911, and it was during his time in The Great White North that he developed his ambition to be an actor. You see, he had enlisted in a Canadian military platoon at the age of 16 and was injured in World War I…during his convalescence, he formed a theatrical group, which led to his later finding work with the Winnipeg Permanent Players. After that, he got a job with a stock company that toured western Canada. The life of an actor was not a secure one, however; when the company folded he found himself toiling in wheat fields in order to earn enough money to return to Winnipeg. Stafford’s interim jobs also included hauling freight and being a stenographer.

Hanley and his first wife Doris—along with his only son, Graham, who was one at the time—entered the U.S. in 1922 (he became a naturalized citizen three years later). He landed villainous roles in B-westerns and, after doing that for a few years, eventually made his way back to the stage. He received rave notices for his appearance in Six Characters in Search of an Author, and the positive buzz from that led to more parts…and eventually an engagement as an actor-director with Los Angeles’ Shelby Players. Then the Great Depression hit, and Stafford found a life preserver in the medium of radio.

Hanley Stafford’s early days over the airwaves were marked by a constant presence in many programs produced for syndication; some of the shows he appeared on include The World Adventurer’s Club, Strange Adventures in Strange Lands, The Last of the Mohicans and Police Headquarters. In the 1932 serial Tarzan of the Apes, Hanley took on three roles—Count Raoul de Conde, Lord Tennington and Karanoff! He could also be heard on Chandu the Magician and The Further Interplanetary Adventures of Flash Gordon, and toward the end of the 1930s, Speed Gibson of the International Secret Police and The Shadow of Fu Manchu (as Nayland Smith). In addition, Hanley was one of several familiar radio voices who appeared in the holiday favorite The Cinnamon Bear (he was Snapper Snitch, the Crocodile). Hanley eventually began to make the rounds of network radio, notably on daytime dramas like John’s Other Wife (on which he was “John” for a few years) and Big Sister; he also played the titular role of Thatcher Colt on the NBC Sunday afternoon crime drama from 1936 to 1937. Some of the other series on which he guested include Big Town, Calling All Cars, The Court of Human Relations, The John Barrymore Theatre and The Palmolive Players.

It was 1938 when Hanley Stafford landed the gig that would make him famous. The legendary Fanny Brice had become quite a sensation on radio playing the child terror known as Baby Snooks (Higgins) on the 1936 series The Ziegfeld Follies of the Air, with broadcast veteran Alan Reed as her father, Lancelot “Daddy” Higgins. When Brice wanted to move to the West Coast, Reed elected to stay put…and Hanley auditioned for the part, much to Fanny’s delight. “He was perfect,” she reminisced in later years. “We didn’t need to hear anyone else.” Brice and Stafford performed Baby Snooks sketches on the Good News program from 1938 to 1940, then on Maxwell House Coffee Time from 1940-44 (a show she shared with comedian Frank Morgan). Baby Snooks then became a half-hour situation comedy on CBS for General Foods from 1944 to 1948, and for Tums on NBC from 1949 until Brice’s death in May of 1951.

Playing opposite Brice soon made Stafford one of the “go-to” guys in radio for stack-blowing, as the poor put-upon “Daddy” would be driven to distraction by his daughter’s bratty antics. The Snooks gig undoubtedly led to Hanley’s other recurring radio role as J.C. Dithers on the situation comedy Blondie. Who could ever forget Dithers bellowing “Bumstead! I’ll run your little finger through the pencil sharpener!” Hanley used his exposure with Fanny to work alongside such radio comedians as Jack Haley (on his Log Cabin Jamboree), Fred Allen (Town Hall Tonight), W.C. Fields (Your Hit Parade) and Eddie Cantor (It’s Time to Smile). In addition to all this, Hanley also made time for guest appearances on such shows as The Halls of Ivy, Presenting Charles Boyer, The Screen Guild Theatre, Suspense and The Railroad Hour.

Hanley Stafford’s work in radio kept him pretty busy, so he only made sporadic appearances in motion pictures like The Light That Failed (1939) and Life with Henry (1941). But after the passing of Fanny Brice, he began to get more roles in movies like Three Guys Named Mike (1951), Lullaby of Broadway (1951), A Girl in Every Port (1952), Just This Once (1952), Here Come the Marines (1952—with the Bowery Boys), Francis Covers the Big Town (1953) and The Affairs of Dobie Gillis (1953). His notable guest appearances on the small screen include such favorites as Maverick, The Millionaire, Sugarfoot, Cheyenne and 77 Sunset Strip—his final appearance on TV was in an episode of The Lucy Show. Hanley Stafford passed away in 1968 at the age of 68…less than two weeks from his sixty-ninth birthday.

Here at Radio Spirits, we remember Hanley for what is unmistakably his greatest radio role: the long-suffering Daddy Higgins, tormented to no end by his mischievous daughter Baby Snooks.