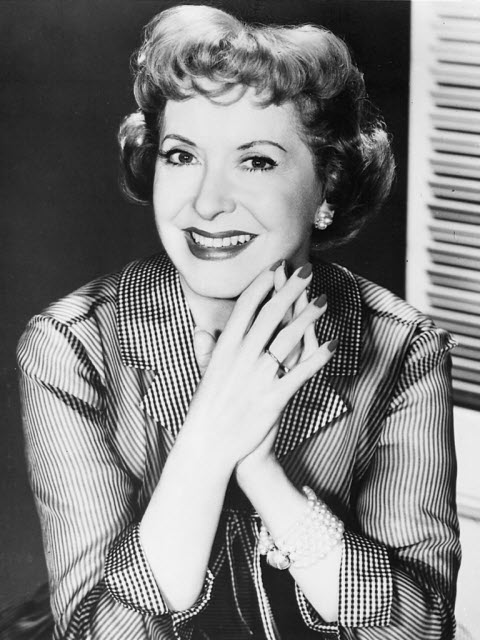 She was born Grace Ethel Cecile Rosalie Allen on this date in 1895, in “the city by the bay” (San Francisco, CA).  Fortunately, to accommodate vaudeville marquees (and future billing in movies, radio and TV), today’s birthday celebrant decided on “Gracie Allen” as her professional name.  A skilled singer and nimble dancer, Gracie would nevertheless become famous as the female half of one of the most successful comedy duos of the twentieth century with her husband George Burns.  Burns never made any bones about the fact that their show business success was due to Gracie; longtime Burns & Allen scribe Paul Henning once recalled in an interview how he wrote his mother with the sensational news that he was now writing jokes for George.

“Congratulations,” Mother Henning wrote back.  “But who writes for Gracie?  She’s the one who says the funny things.”

It seemed written in the stars that Gracie Allen would embark on a show business career.  Her father Edward earned a living as a song-and-dance man in vaudeville, and Gracie made her stage debut at age three performing in his act.  At fourteen, Gracie teamed up with her three sisters in an act that saw success performing in various vaudeville houses throughout the West Coast.  On her own in the 1920s, Allen relied on her lively terpsichorean talents and a knack for Irish dialect to win bit parts as colleens in stage shows before going to work for the vaudeville troupe Larry Reilly and Company as a dancer.

As a result of a dispute over billing, Gracie eventually parted with Larry and Company…and for a brief moment, gave serious consideration to enrolling in secretarial school when she had difficulty finding work on stage.  In 1922, Allen attended a vaudeville show in New Jersey for the purpose of watching one of her roommates perform.  It was there she met both her future partner and husband, George Burns.

Burns (born Nathan Birnbaum in 1896) had done everything under the sun during his vaudeville career: singing, dancing, and snappy, syncopated patter.  He had just split with partner Billy Lorraine when he met Gracie…and was impressed enough to gamble on starting an act with her, believing she would make an ideal comedic foil.  They opened at Newark’s Hill Street theatre in 1923; George was the comedian, Gracie the straight woman.

Their act initially went over with all the enthusiasm shown to ants at a picnic.  However, Burns couldn’t help but notice that while his one-liners “laid eggs,” Gracie’s straight lines got laughs.  “I knew right away that there was a feeling of something between the audience and Gracie,” George recalled in later years.  “They loved her, and so, not being a fool and wanting to smoke cigars for the rest of my life, I gave her the jokes.”

It wasn’t just audiences that fell for Gracie—George also started to look at her beyond their show business partnership…though he had serious romantic competition from her boyfriend, songwriter-dancer Benny Ryan.  What gave Burns the edge in the relationship was an emergency appendectomy operation Gracie was forced to undergo in a San Francisco hospital in 1925.  George sent his fiancée enough flowers to fill her entire hospital room, and Gracie was impressed enough to move him to the top of her list of suitors.  Around Christmas time, George gave Gracie an ultimatum: she had ten days to decide whether or not she would marry him.  On the ninth day, she said “yes”; the couple tied the knot on January 7, 1926.

The act perfected by Gracie and George during their vaudeville days was once described by Burns as “illogical logic.”  On stage, Gracie played a daffy screwball who sincerely believed the often ludicrous statements she uttered were completely true.  “It makes sense but it only made sense to Gracie,” George affirmed.  The husband-and-wife duo soon became top vaudeville headliners, even achieving every performer’s dream of “playing the Palace” in 1931 with a nine-week engagement at New York’s entertainment Mecca with Eddie Cantor and George Jessel.  By that time, however, vaudeville was beginning its slow decline…and Burns quickly realized that their act could only remain successful once they cracked radio.  After a tryout on the BBC (they were touring London at the time) and Gracie’s well-received performance on Cantor’s Chase and Sanborn Program in 1931, Burns and Allen were hired for The Robert Burns Panatela Program in February of 1932, sharing a microphone with Guy Lombardo and His Royal Canadians.

While Gracie and George were making their fortunes on radio with a show that was frequently ranked among the top five comedy programs, the duo was also enjoying success on the silver screen.  They appeared in a series of one-reel comedy shorts for Paramount between 1930 and 1933, while gracing (ooh…bad pun) the casts of films like International House (1933), Six of a Kind (1934), and We’re Not Dressing (1934).  Gracie even appeared in three films without her famous husband: The Gracie Allen Murder Case (1939), Mr. and Mrs. North (1941), and Two Girls and a Sailor (1944—in which she performs the classic “Concerto for Index Finger”).

Throughout the 1940s, Gracie and George continued their radio success with shows for the likes of Swan Soap and Maxwell House; by the time of their final season on radio (for Amm-i-dent toothpaste) in 1949, Burns and Allen were willing to give that upstart television a try.  It would be more accurate to say that George was willing; Gracie had a little stage fright before the television cameras and found it much easier to perform not looking at “the little red light.”  After doing a live show for two years, The George Burns and Gracie Allen Show became a filmed series and, while never a ratings blockbuster, was one of CBS’ most dependable situation comedies.  Gracie had to be coaxed by George at the end of every season to renew their series; after eight years of small screen success, “Googie” told “Nattie” that she had had enough.  Gracie enjoyed retirement for six years before her passing in 1964; purportedly, George was so devastated by his wife’s death that for years the only way he could get a good night’s sleep was in her room.