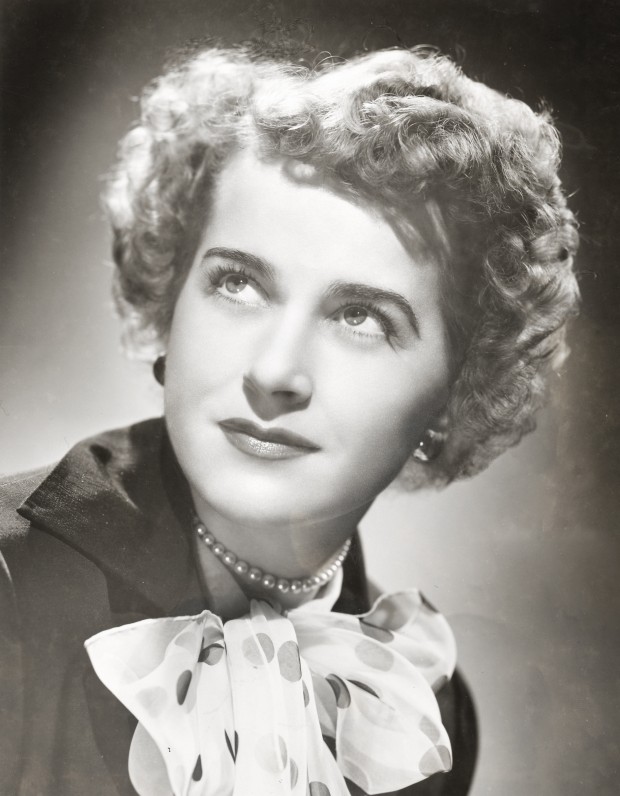 In his invaluable reference book The Great Radio Soap Operas, author Jim Cox opines that Gertrude “Trudy” Warner—born in Hartford, Connecticut on this day in 1917—“may have played the leads or female leads in more dramas than any other actress.”  In fact, Jim wrote an article for Radio Recall in 2006 entitled “Soap Stars: Ethereal Busybodies” that credited Warner with eighteen soap opera roles to allow her a third-place finish in the top five: ahead of Fran Carlon (17) and Raymond Edward Johnson (16), and only slightly behind champ Ethel Owen (22) and runner-up Marvin Miller (20—though on many of those programs he served as the announcer).  In her 1986 obituary, The New York Times noted that in 1945, Trudy kept pretty busy doing live broadcasts of Perry Mason (on which she played Della Street), Big Sister, When a Girl Marries, and This Life is Mine.

Trudy Warner’s area of expertise, after she graduated from high school and college, was home economics…and she plied this talent on many a local program broadcast over Hartford’s WTIC.  Still, she had aspirations of becoming a dramatic actress (she already had a sideline as a blues singer)—so she journeyed to New York, and not long after found work at NBC Red on the critically acclaimed daytime drama Against the Storm.  A year later, Warner landed the female lead, Rebecca Lane, on Beyond These Valleys when she moved over to CBS.  For a few months in 1941, Trudy acted opposite James Meighan on the prime-time newspaper drama City Desk.

For most of her lengthy radio career, Gertrude Warner was a (daytime) drama queen.  The soap operas on which she appeared include The O’Neills, The Story of Ellen Randolph, The Man I Married, Marriage for Two, Modern Romances, The Mystery Man, Real Stories from Real Life, The Right to Happiness, When a Girl Marries, and Valiant Lady.  As previously mentioned, Warner was one of three actresses to play Gal Friday Della Street on Perry Mason, but she also emoted as Susan Wells on David Harum…and played Tracy, the second wife of Young Doctor Malone.  Gertrude even got the opportunity to practice medicine as the titular doc of Joyce Jordan, M.D.; and when a Lux Radio Theatre adaptation of Mrs. Miniver did well in the Hoopers for CBS in December of 1943, Trudy was drafted to play the part made famous by Oscar-winner Greer Garson in a short-lived radio version the following year.  In the 1950s, she took on the role of Hope Winslow, the narrator of the popular series Whispering Streets.

But labeling Gertrude Warner as a “soap opera actress” would do her a tremendous disservice.  She served as the female lead on the Mutual dramatic anthology The Brownstone Theatre, after a previous stint doing similar work on The Matinee Theatre (previously known as Dangerously Yours).  She played Nikki Porter, girlfriend to the shamus who solved weekly mysteries on The Adventures of Ellery Queen.  Trudy’s radio credits also include The Cavalcade of America, The Columbia Workshop, Dimension X, Ethel and Albert, The Fat Man, The MGM Theatre of the Air, Mr. Ace and Jane, Murder by Experts, The Mysterious Traveler, Nick Carter, Master Detective, Secret Missions, Studio One, and Theater of Romance.

Gertrude’s best known radio gig might very well be The Shadow; she was the last actress to play “[Lamont] Cranston’s friend and companion, the lovely Margo Lane” beginning in mid-1949.  Sadly, because many of the Shadow’s adventures were being recorded on magnetic tape at that time and then erased to use the tape over and over again, not many of Warner’s broadcasts remain for new generations to hear.  Because radio kept the actress busy, Trudy expressed little to no interest in silver or small screen work save for the occasional commercial and a brief stint as Claire English Lowell Cassen Shea on the CBS-TV soap As the World Turns (back to her roots!).  This didn’t dissuade her, however, from teaching television acting in later years at Weist Barron studios and at Oberlin College.  Warner remained a die-hard radio thespian, working on such shows as Suspense, Theatre Five, and Yours Truly, Johnny Dollar until they trotted off the stage, one by one, in Radio’s Golden Age.  Gertrude Warner left this world for a better one in 1986.