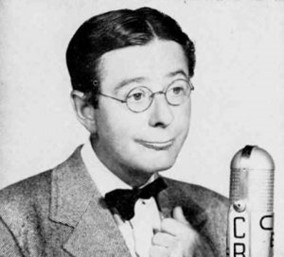 The actor born Frank Winfield Russell Marion Derwent Readick, Jr. (that’s what he called himself in a 1932 issue of Radio Guide) on this date in Seattle, Washington in 1896 was already a performing veteran at the age of two.  Readick traveled with his parents’ covered wagon show, and (in another edition of Radio Guide) he reminisced that the show once trekked through Utah in search of audiences with little success.  The troupe finally came upon a “boom town” and the large population lifted the spirits of Frank’s father. Once they pitched their tents, he started dreaming of hefty box office receipts that would allow him to pay the salaries of his employees.  The next morning, the senior Readick awoke to learn that the entire population of that town—save for twenty people—had left overnight.

When Frank Readick, Jr. joined his parents’ show at The Curtis Theater in Denver, Colorado, he portrayed a character named “Black Crook, Jr.”—he was “a cunning little clown” who’d appear on stage with a donkey and a stein of beer in one hand.  You needn’t worry about anyone contributing to the delinquency of a minor, however; the donkey was trained to kick the stein out of Readick’s hand before the beverage went down his gullet, whereupon a deadpan Frank would then sing When You Make Those Goo-Goo Eyes at Me.  From performing in dance halls in Dawson City, Alaska (where he picked up gold nuggets tossed at him by the audience) Readick made his way to Broadway.  He appeared in productions like Solid Ivory (1925), although much of his stage career found him touring “on the road.” (“Every Ernest Truex show that played New York, I’d play,” he once remarked.)  One of the productions in which he toured was Peter Pan, with actress Maude Adams.  “Who could think a potential Shadow flighty enough to flit around with ‘Peter Pan’?”

Frank Readick’s reference to “the Shadow” was an observation about his most famous radio role. But before playing the sinister figure who knew what evil lurked in the hearts of men, the actor got his start in front of a microphone playing “Happy Jack Lewis” on Hank Simmons’ Show Boat.  Readick was also a regular on The Love Story Hour, an anthology that dramatized tales from a Street and Smith publication. In fact, he and another actor from that show—Teddy Bergman—starred on Joe Palooka, a CBS series inspired by Ham Fisher’s popular comic strip.  (Frank played manager Knobby Walsh, with Bergman—who later changed his name to the more recognizable “Alan Reed”—as Joe.)  Other radio programs that availed themselves of Frank’s talents include Eno Crime Clues (The Eno Crime Club), Dangerous Paradise, and The March of Time.  (Readick was a regular on this last show from its very first broadcast, often playing New York mayor Jimmy Walker and Chicago mayor Anton Cermak.)

Four months after the premiere of The Detective Story Hour in July of 1930, Frank Readick replaced James La Curto (who had landed a Broadway gig) as the omnipresent narrator who would later take over as the series’ protagonist: The Shadow!  Frank played the Shadow when the program became The Blue Coal Radio Revue in September of 1931, and stayed on until the show’s departure in March of 1935. (Street and Smith insisted that the program start to emulate the character depicted in the stories/novels of Walter B. Gibson.)  This wasn’t the end of Readick’s participation on The Shadow, however.  Though the secret identity of “wealthy young man-about-town” Lamont Cranston would be the responsibility of actor Orson Welles beginning in the fall of 1937, Welles—for all his acting talent—was never quite able to reproduce the sinister laugh of the character at the opening and close of each show.  So, previous recordings of Readick’s Shadow laugh were used during Orson’s stint with the series (making Welles the only radio Shadow who didn’t perform the famous signature chortle).  Readick also portrayed the Shadow’s “doppelganger” on a January 19, 1941 broadcast entitled “The Shadow Challenged.”

Frank Readick’s association with Orson Welles didn’t just stop with his helping out the actor in the-Shadow-laughs department.  Readick was one of several thesps who appeared in Welles’ celebrated radio production of Les Miserables in 1937.  In addition, Frank would be called upon to perform on The Mercury Theatre on the Air (in such productions as “Heart of Darkness” and “A Tale of Two Cities”); he’s best-known as doomed reporter Carl Phillips in the celebrated “The War of the Worlds” broadcast.  Readick continued with the program when it became Campbell Playhouse in December of 1938.  Welles would later appear alongside Frank (as “Matthews”) in the 1943 suspense thriller Journey Into Fear.

Frank Readick, it could be said, was a creature of radio. His motion picture resume outside of Journey was pretty skimpy; he didn’t even receive credit for voicing “The Shadow” in the first (1931’s A Burglar to the Rescue) of a short series of two-reel shorts based on the radio program and produced by Universal between 1931 and 1932. (This short was believed to be lost for many years until it was restored and shown to an appreciative Cinecon audience in 2004.)  Radio kept Frank pretty busy; he was the star of Smilin’ Jack, a 1939 Mutual serial based on Zack Mosley’s comic, and later portrayed the titular henpecked protagonist of Meet Mr. Meek, a CBS situation comedy that aired from 1940 to 1942.  Readick’s other radio credits include The Cavalcade of America, The Columbia Workshop, Counterspy, Famous Jury Trials, The FBI in Peace and War, Gangbusters, Murder at Midnight, The Mysterious Traveler, Studio One, Suspense, and Theatre of Romance.

For a time on the daytime drama This is Nora Drake, Frank Readick emoted as “William Arnold”…and his son Robert (one of several actors to play “Johnny Dollar”) worked alongside him at the microphone as “Tom Morely.”  Frank passed away in 1965, but you can still hear the laugh that cemented his radio immortality in The Shadow.