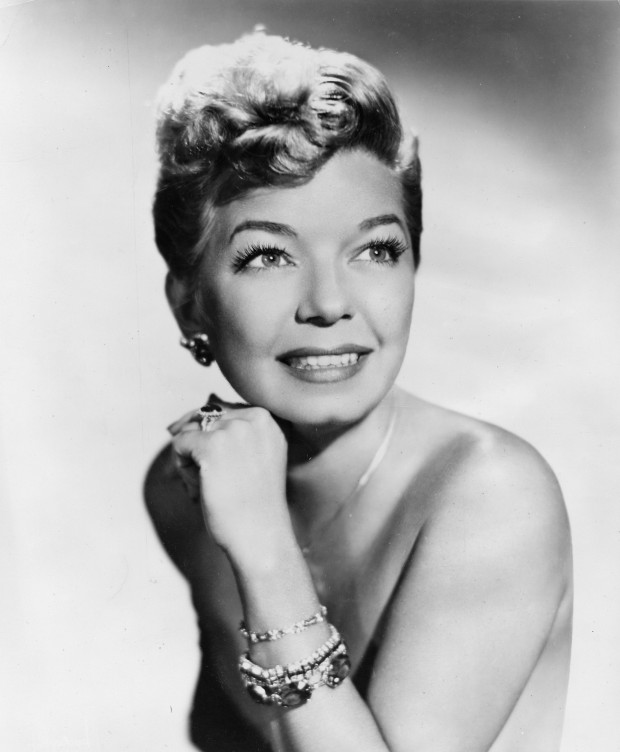 “Just play it like a nagging wife” was comedy writer Philip Rapp’s suggestion to actress-singer Frances Langford, who was about to take on a facet of radio performing with which she had only a passing familiarity.  Frances, born Frances Newbern Langford in Lakeland, FL on this date in 1913, had traded funny quips with comedian Bob Hope as the vocalist on his Pepsodent show from 1941 to 1946 (not to mention accompanying him on his many overseas jaunts during WW2), and before that she appeared in musical comedies such as Broadway Melody of 1936 (1935) and Born to Dance (1936).  But portraying Blanche Bickerson, the never-ceasing shrewish spouse of the hapless John Bickerson (played by Don Ameche), would be a new experience for her.  Langford took it in stride.  As she reminisced in an interview years later, “Actually, it wasn’t that hard to do at all.  Phil’s scripts were so well written that the laughs got themselves.”

From childhood, a musical career seemed to be in the tea leaves for young Frances.  Her mother was Annie Newbern, a renowned concert pianist, and Frances set her sights on studying music at Florida Southern College.  Her operatic ambitions were sidelined by a tonsillectomy she underwent at age 17—the result was that her beautiful soprano voice had been transformed into a husky contralto.  Fortunately for Langford, she had the perfect pipes for the big band era, which was just getting underway at that time.  Eli Witt, a Tampa cigar manufacturer, heard Frances sing at an American Legion party and hired her to do her thing on his local radio show for $5 a week.  It was there that she attracted the notice of the Vagabond Lover himself, Rudy Vallee, who invited her to sing on his popular Fleischmann Hour.

Invited to New York, Frances entertained at a birthday party for Cole Porter…and that’s where she was heard by Paramount’s Walter Wanger, who signed her to a movie contract without a screen test.  In Hollywood, Frances had appeared in two short subjects for Vitaphone-Warner Brothers (circa 1932), but under Wanger’s tutelage she made her feature film debut (alongside Alice Faye, George Raft, and Patsy Kelly) in 1935’s Every Night at Eight.  Every Night was the movie in which Frances sang what would become her signature tune, I’m in the Mood for Love.  The vocalist charted several popular songs, including I’ve Got You Under My Skin, I Feel a Song Comin’ On, Easy to Love, Harbor Lights, So Many Memories, Was it Rain?, and Falling in Love with Love.  In addition, Langford would be in much demand for movie musicals, gracing the cast of tunefests like Collegiate (1936), Palm Springs (1936), The Hit Parade (1937), and Hollywood Hotel (1937).

That last film was a movie version of a popular radio variety program hosted by gossip maven Louella Parsons and featuring boy crooner Dick Powell.  Frances would be a regular on Hollywood Hotel from 1934 to 1938, and she was also building a radio resume that included The Spartan Hour, The Colgate House Party (also known as The Joe Cook Show), and The Texaco Star Theatre (starring Ken Murray).  When Bob Hope asked her to accompany him on the first of many excursions he would make to entertain those in the military during the Second World War, Langford also joined Hope’s weekly radio show as the featured vocalist.  Her many visits to military bases in the U.S. and around the world inspired Frances to keep a journal, which would eventually be printed in Hearst-owned newspapers as a regular column (“Purple Heart Diary”).

Despite the hectic pace of “entertaining the troops,” Frances Langford still found time to make movies.  She appeared in such films as Dreaming Out Loud (1940—the first of several films starring the boys from Pine Ridge, Lum ‘n’ Abner), Too Many Girls (1940—with Lucille Ball and Desi Arnaz), and Swing It Soldier (1941—Frances plays twins, and the movie also features Hanley Stafford, Don Wilson, and Brenda [Blanche Stewart] and Cobina [Elvia Allman]!).  For 1941’s All-American Co Ed, Langford dyed her brunette tresses blonde, and kept them that way for the rest of her career.  Although Frances appeared in major motion pictures like Yankee Doodle Dandy (1942) and This is the Army (1943), most of her film appearances were in smaller B-musicals (several built around radio themes), including Follow the Band (1943), Cowboy in Manhattan (1943), Never a Dull Moment (1943), Career Girl (1944), Radio Stars on Parade (1945), People are Funny (1946), The Bamboo Blonde (1946), and Beat the Band (1947).  Langford would close out the 1940s with a B-western, Deputy Marshal (1949), which bears the distinction of featuring actor Jon Hall (her real-life husband) as her leading man (it would be their only film together).

On radio, Frances Langford starred on The Chase and Sanborn Hour—a 1945 summer replacement for the popular program starring Edgar Bergen & Charlie McCarthy.  Langford would headline another summer show in 1947, when George Burns & Gracie Allen took a break from Maxwell House Coffee Time.  It was with Don Ameche on NBC’s The Drene Show (also known as Drene Time) in the fall of 1946, however, that Frances would play the radio role for which she’s best known today.  Ameche and Langford would convulse listeners every week as “The Battling Bickersons.”  After their show for Drene, the pair would join Frank Morgan for The Old Gold Show, which ran on CBS from 1947 to 1948.  Despite the popularity of the Bickersons sketches, radio had a hard time turning their verbal squabbling into a regular series.  There was a half-hour audition record made in 1948, and “The Bickersons” continued to be heard occasionally on the Bergen-McCarthy program (with Marsha Hunt replacing Frances as Blanche.)  But in the summer of 1951, Langford reprised her role in a full CBS sitcom devoted to the couple, with Lew Parker replacing Ameche as John.

In the 1950s, Frances Langford would make two more motion pictures: Purple Heart Diary (1951), based on the previously mentioned column detailing Langford’s WW2 experiences, and The Glenn Miller Story (1954)—Frances played herself in both movies.  By this time, she was turning her attention to television.  With Don Ameche, Langford had a go at making the Bickersons a small screen success in the series Star Time (1950) and The Francis Langford-Don Ameche Show (1951-52).  Langford would later headline Francis Langford Presents in 1959, and The Francis Langford Show in 1960…but for the most part, was content to appear on TV screens in a guest star capacity on shows hosted by Spike Jones, Jackie Gleason, Jack Carter, and Perry Como, among the many.  In the 1960s, she chatted on talk shows hosted by Johnny Carson and Mike Douglas, and made appearances on series like The DuPont Show of the Week and The Hollywood Palace.

For all intents and purposes, Frances Langford left Hollywood in 1955…and with her second husband, Ralph Evinrude, settled for a more content existence in Jensen Beach, FL as the featured singer in a nightclub, The Frances Langford Outrigger Resort.  Frances was devoted to philanthropic causes, giving generously to The Florida Oceanographic Society on Hutchinson Island, and a park in Jensen Beach also bears her name (Langford Park).  Langford lived to the ripe-old age of 92 before her passing in 2005, and to this day entertains fans old and new with CD collections of her songs and radio appearances.