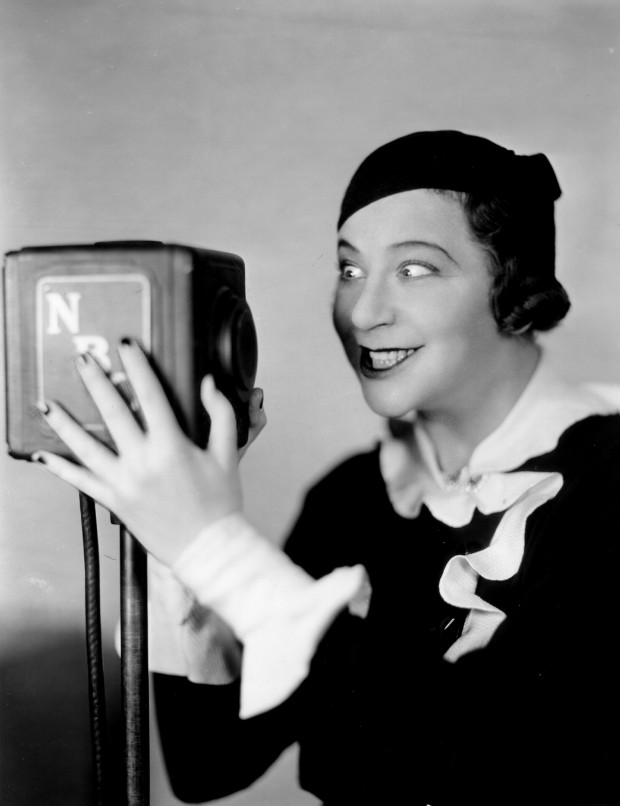 Show business’ original “Funny Girl” was born Fania Borach in New York City on this date in 1891. As Fanny Brice, she dominated the worlds of stage, screen and radio: as a major headliner with the Ziegfeld Follies beginning in 1910, and as a motion picture star with vehicles like My Man (1928—sadly, a lost film) and Be Yourself! (1930). Old-time radio fans in particular revere the considerable comedic talents she brought before a ribbon microphone; over the ether, Fanny brought to life one of the most beloved brats in the aural medium—“Baby” Snooks Higgins.

Fanny was the third child in a family of four; her parents Charles and Rose were saloon owners, and Fanny set her sights on a show business career from the age of twelve—singing on street corners in South Brooklyn to earn pocket money. By 1908, she was so determined to shoot for the stars that she dropped out of school to join a burlesque revue. (Brice was one of a select group of radio performers—including Abbott & Costello and Red Skelton—who honed their craft in that uniquely American theatrical art form.) After seeing her perform in a production of College Girls in 1910, impresario Florenz Ziegfeld hired her to appear in his latest Follies revue that same year, as well as the Ziegfeld Follies of 1911. Fanny worked for Flo off-and-on throughout the 20s and early 30s, notably in a 1921 Follies where she introduced her signature tune, “My Man”…as well as another Brice standard, “Second Hand Rose.” (Her Broadway resume included such shows as Fioretta, Sweet and Low, and Billy Rose’s Crazy Quilt.)

The origins of her radio alter ego, Baby Snooks, were perceived to be a Follies skit co-written by legendary playwright Moss Hart. But Snooks was also inspired by various “little girl” roles that Brice often played onstage, as well as a memorable musical showcase at a party she attended where she performed “Poor Pauline” in a high-pitched voice to an appreciative crowd (Fanny later appropriated “Pauline” as an encore during her stage performances). By 1936, Fanny was doing the Snooks character on CBS’ Ziegfeld Follies of the Air—opposite radio veteran Alan Reed, who essayed the role of her exasperated father. Fanny went west a year later (Reed elected to stay behind), and revived Baby Snooks for NBC in December 1937 for the Good News variety program, sponsored by Maxwell House (though some have joked that with the presence of so many “stars as there are in heaven” it was actually sponsored by Metro-Goldwyn-Mayer).

Replacing Reed as Lancelot “Daddy” Higgins was character actor Hanley Stafford—who made the role his own, adding that impeccable touch of aural frustration as Fanny’s foil. (In later years, Brice described the outstanding chemistry she had with her co-star: “He was perfect. We didn’t need to hear anyone else.”) Fanny and Hanley continued as regulars on Good News until 1940, when the sponsor instituted a new variety show in the fall entitled Maxwell House Coffee Time. Brice joined forces with fellow Good News player Frank Morgan for a half-hour show that, oddly enough, rarely had the two performing together—they staked out different halves of the show, and competed to see who would get the loudest laughs each week. Maxwell House Coffee Time ran until 1945 (in the fall of ’45, they would sponsor George Burns & Gracie Allen), with Morgan welcoming M.C. Robert Young and singer-comedienne Cass Daley in the final season.

By that time, Fanny had decided to strike out on her own with a series originally titled Post Toasties Time (a nod to the sponsor)…but which gradually came to be identified as The Baby Snooks Show (General Foods and Jell-O paid the bills in later seasons). The Baby Snooks Show adopted a situation comedy format, allowing Brice’s Snooks to be a holy terror for a full half-hour instead of her former fifteen-minute sketches. Stafford continued playing the patriarch of the family, with actresses Lalive Brownell, Lois Corbett and Arlene Harris all taking turns as Vera Higgins, Snooks’ mother. Child impersonator Leone Ledoux was Robespierre, Snooks’ baby brother, and other characters included a young Danny Thomas as Jerry the mailman and Alan Reed (reuniting with Fanny!) as Mr. Weemish, Daddy’s demanding boss. (Ken Christy later took over the role of Weemish.)

Fanny Brice earned a reputation as being a dedicated performer…and playing the weekly role of Baby Snooks was no exception. She would often become completely immersed in playing radio’s favorite female brat: “I love Snooks, and when I play her I do it as seriously as if she were real,” she once said. “I am Snooks. For twenty minutes or so, Fanny Brice ceases to exist.” She continued to express her love playing Snooks until 1948, when the show took a hiatus for a year after CBS requested she take a cut in salary. Brice refused to do so, which explains why she returned to do The Baby Snooks Show for NBC in the fall of 1949. (Take that, talent raids!) Fanny could have conceivably played the part until the Golden Age of Radio took its final bows at curtain…but on the day of the May 29, 1951 broadcast, Brice succumbed to a sudden cerebral hemorrhage at the age of 59. A musical tribute was featured instead, supplemented with a moving eulogy from her long-time co-star Stafford: “We have lost a very real…a very warm…a very wonderful woman.”

Fanny Brice’s only appearance on television was on an installment of CBS’ live Popsicle Parade of Stars in June of 1950; fittingly, she performed a sketch with Hanley Stafford as “Baby Snooks and Daddy”…but later observed that the character just didn’t work on TV. Brice’s film appearances were sporadic at best; she was delightful alongside Judy Garland in Everybody Sing (1938), and she also appeared in the likes of The Man from Blankley’s (1930), The Great Ziegfeld (1936) and Ziegfeld Follies (1945). For many, however, her antics of the mischievous little girl who would innocently ask “Whyyyy, daddy?” marks her legacy.