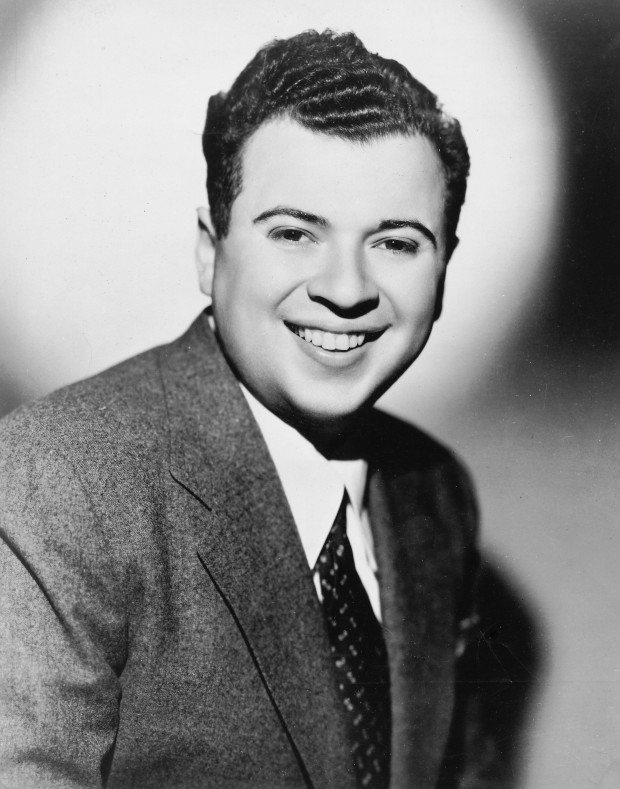 The star of radio’s The Aldrich Family, Ezra Stone, may have portrayed an endearingly awkward teenager over the airwaves…but in real life, his co-star Jackie Kelk (as best buddy Homer Brown) confessed that Stone bore not the slightest resemblance to “Henry Aldrich” in person. As Kelk reminisced in Gerald Nachman’s Raised on Radio, “It was a big shock to people who came to see the show in the studio, because I looked more the [Henry Aldrich] part; I was slight and skinny. Ezra was this fat little man in a vest who smoked cigars.” Fortunately, radio was a medium where looks didn’t matter—the actor who would become famous playing Henry, Ezra Chaim Feinstone, was born on this date in New Bedford, Massachusetts in 1917.

Ezra related in a 1975 interview with radio historian Chuck Schaden that his show business career was can be traced to a debt owed to his father Sol by an actor friend; the elder Stone suggested that his pal work off the amount “in trade” by teaching his son Ezra how to speak. Ezra was able to work around a lifelong lisp as a result of these speech lessons, and began to get parts as a juvenile (at the age of seven) in local plays produced in Philadelphia, where the family had relocated. Stone also began his first appearances on radio on the popular The Children’s Hour, as well as emoting on stage as part of the National Junior Theatre. When he wasn’t working professionally, he attended acting classes at the prestigious American Academy of Dramatic Arts.

Ezra eventually landed roles in such Broadway hits as Room Service and Brother Rat—but it was while he was serving as a production assistant to impresario George Abbott that he won the part that would make him famous: a trouble-prone lad named Henry Aldrich, the protagonist of Clifford Goldsmith’s What a Life! The success of the show attracted the attention of entertainer Rudy Vallee, who asked Goldsmith to work up an eight-to-ten minute excerpt of the play to present on his popular Thursday night program The Royal Gelatin Hour. After the first sketch was well received, Rudy pressed Cliff for more Aldrich Family playlets—despite Goldsmith’s belief that he had done all he could with the premise. Soon, Kate Smith—whose hour-long variety show also aired on Thursdays—requested that the playwright do the same for her program, and “the Aldrich Family” became a well-received segment on her series during the 1938-39 season.

Young and Rubicam, needing a summer replacement for The Jack Benny Program, pressed The Aldrich Family into service in 1939 as a half-hour sitcom…and when Jack returned in the fall, so did Henry and his folks. The Aldrich Family became one of radio’s highest-rated comedies, centering around a young adolescent whose best intentions often gave way to complete catastrophe by the end of the half-hour, with his parents Sam (a lawyer, played by House Jameson) and Alice (Katharine Raht for most of the show’s run) looking helplessly on; it’s no secret that his weekly misadventures were often introduced by an announcer remarking on “the troubles of Henry Aldrich.”

Henry Aldrich was the role Ezra Stone was born to play—though he relinquished the part to several replacements during his hitch with Uncle Sam during World War II (Norman Tokar, Dickie Jones and Raymond Ives all got their opportunities to play Centerville’s favorite son). Stone picked up where he left off in November of 1945 and continued to convulse audiences with his puberty-cracked voice until 1951. Bobby Ellis played Henry during the show’s last season on radio (1952-53), probably because he was already doing so on the television version. TV presented a problem for “the fat little man in a vest who smoked cigars.” Ezra wasn’t going to be able to play Henry when The Aldrich Family transitioned to the small screen—but that didn’t preclude him from writing for the series, and directing several episodes of the program as well. Stone had kept busy in the theater world during his radio gig, appearing on Broadway in the likes of The Alchemist and She Stoops to Conquer, and directing hits like Me and Molly and At War with the Army.

Because his movie career was fleeting—Ezra appeared in only two feature films, Those Were the Days! (1940) and a brief bit as himself in This is the Army (1943)—Stone started a second career behind the camera as a director, helming installments of such classic television hits as I Married Joan, Bachelor Father, Please Don’t Eat the Daisies, The Munsters, Lost in Space and Julia. Stone was also producer on The Hathaways, a short-lived sitcom in which Jack Weston and Peggy Cass played papa and mama to The Marquis Chimps. Still, it’s hard to completely abandon the greasepaint: the actor in Ezra circulated as a guest star on such shows as Hawaiian Eye, Emergency! and Quincy, M.E.

In his twilight years, Ezra slowed down a bit to enjoy married life with his wife Sara Seegar—an actress who’s perhaps best remembered as “the second Mrs. Wilson” (Eloise) in the final season of TV’s Dennis the Menace. The two of them sponsored a number of acting workshops, with the expressed purpose of training aspiring thespians to learn the craft. Stone also donated generously of his time to reminisce with new generations of old-time radio fans, notably in a 1976 television special entitled The Good Old Days of Radio, which also featured performers like Edgar Bergen, Dennis Day, Jim “Fibber McGee” Jordan and Eddie “Rochester” Anderson.