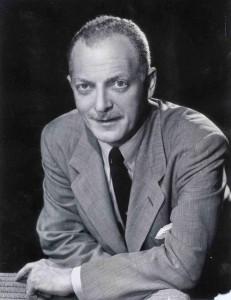 In the 1941 movie classic Citizen Kane, Kane’s business manager Mr. Bernstein makes an observation that remains in the memories of movie fans long after Kane’s final reel has unspooled: “One day, back in 1896, I was crossing over to Jersey on the ferry, and as we pulled out, th ere was another ferry pulling in, and on it there was a girl waiting to get off.  A white dress she had on.  She was carrying a white parasol.  I only saw her for one second.  She didn’t see me at all, but I’ll bet a month hasn’t gone by since that I haven’t thought of that girl.”

Citizen Kane was the feature film debut of actor Everett Sloane (who played Bernstein).  Today is the anniversary of his debut on Earth, when he was born in Manhattan, NY in 1909.  Although Sloane would never be mistaken for a leading man, he enjoyed a fruitful career as a respected character actor on stage, in movies, and on TV.  (He even dabbled in songwriting and directing.)  Since radio is an aural medium, however, Everett could play as many handsome male leads as his heart desired over the ether…and suffice it to say, he was one of the busiest actors to ever stand in front of a microphone.

Everett Sloane once remarked to an interviewer: “I never got the idea of becoming an actor until I was about 2 years old.”  It’s nice to know Everett carefully took the time to consider his options.  At age seven, he made his footlights debut in a school production of A Midsummer Night’s Dream (he played Puck)—but his first professional gig wouldn’t happen until 1928, in a play performed at The Cherry Lane Theater in New York’s Greenwich Village.  Sloane had been enrolled at The University of Pennsylvania, but left in 1927 to join a stock company in Moyland, PA.  An actor’s life is not an easy one, and because thespians thrive on little luxuries like food, clothing, and shelter, young Everett found a job as a stockbroker’s runner on Wall Street for the princely sum of $17 a week.  A year later, that ballooned to $140 a week when he was promoted to manager’s assistant.

Sloane, however, became one of the many victims of the Wall Street Crash in 1929; because his salary was slashed in half as a result of that financial disaster, he aggressively began looking for acting jobs…and found a welcome home in radio.  His first gig was on a broadcast of WOR’s called Impossible Detective Mysteries.  Further opportunities on shows such as 40 Fathom Traveler followed, and in 1935 Everett became a member of the large cast of performers on the highly-rated The March of Time.  Also appearing on Time was a young Orson Welles, who cast Sloane in his 1937 Mutual radio production of Les Miserables, and later made him a member of his renowned Mercury Theater company.  This insured that Everett worked steadily on such Orson-dominated shows as The Shadow (he often played Shreevy the cab driver) and The Mercury Theater on the Air (and later, when Theater had secured a sponsor, The Campbell Playhouse).

At the same time that Everett Sloane was emoting on The March of Time, the actor made his Broadway debut in a production of Boy Meets Girl…and he followed that success with such plays as All That Glitters (1938), Native Son (1941—the last of the Mercury Theater productions), and A Bell for Adano (1945).  A 1946 revival of The Dancer gave Everett his first opportunity to direct, and in 1960 a revue entitled From A to Z (with a book co-written by Woody Allen) featured a number of songs contributed by novice tunesmith Sloane.  (The cast of that production featured Hermione Gingold, Elliott Reid, Stuart Damon, Bob Dishy, and Larry Hovis.)

It’s safe to say, however, that radio was Everett’s bread-and-butter—his acting over the airwaves netted him at one time an annual income of $50,000, and Sloane himself estimated that in his first fifteen years in the business he performed on an average of twenty shows a week.  Everett was heard on daytime dramas like Betty and Bob, Central City, The Guiding Light, Pretty Kitty Kelly, This is Nora Drake, and Valiant Lady.  He was a cast member of The Goldbergs for eight years (as son Sammy), having previously appeared on Gertrude Berg’s The Heart of Glass in 1935.  Sloane also made the rounds on many an anthology show, including The Cavalcade of America, The CBS Radio Workshop, Columbia Meets Corwin, The Columbia Workshop, The Ford Theatre, The Hallmark Hall of Fame, The MGM Theatre of the Air, The NBC Star Playhouse, The Philip Morris Playhouse, The Radio Reader’s Digest, Studio One, and The Theatre Guild of the Air.

Everett Sloane sidekicked as Denny on Bulldog Drummond alongside his fellow Mercury Theater thespian George Coulouris (who played the title role), and at one time was Dr. Benjamin Ordway on radio’s Crime Doctor (a role played previously by another Mercury alum, Ray Collins).  Other shows on which Everett appeared include The Adventures of the Abbotts, The Affairs of Peter Salem, Barrie Craig, Confidential Investigator, Cloak and Dagger, Crime and Peter Chambers, Crime Does Not Pay, The Danny Kaye Show, The Falcon, Inner Sanctum, The Man Behind the Gun, The Molle Mystery Theatre, Mr. Ace and Jane, The Mysterious Traveler, Stroke of Fate, Suspense, Treasury Agent, True Detective Mysteries, Words at War, and You Are There.  Beginning in July of 1953, Sloane was heard as Captain Frank Kennelly on Twenty-First Precinct, a part he played until 1955 (when James Gregory took over).

Somehow, Everett Sloane missed out appearing in Orson Welles’ second directorial movie effort, The Magnificent Ambersons (1942).  But he more than compensated for this with a role in Journey Into Fear (1943—film buffs still debate whether Welles directed this one despite the credit of Norman Foster), and made a memorably formidable villain (a criminal defense attorney confined to crutches) in Orson’s cult noir The Lady from Shanghai (1947).  (Everett also appeared with Orson in 1949’s Prince of Foxes.)  Many of Sloane’s finest moments onscreen were Orson-free, however: a sympathetic doctor in The Men (1950); a mysterious mob figure in The Enforcer (1951); and a ruthless boss in Patterns (1956).  Everett’s other film appearances include The Big Knife (1955), Somebody Up There Likes Me (1956), Lust for Life (1956), and The Disorderly Orderly (1964).

Everett made many inroads into television as well…though one of his more prolific gigs harkened back to his radio roots: he was the voice of Dick Tracy in an animated cartoon series produced in 1961 (in addition to providing voices on The Adventures of Jonny Quest).  Sloane also flexed his directorial muscle on episodes of Lawman, 77 Sunset Strip, and Hawaiian Eye, while making the acting rounds on the likes of Bonanza, Gunsmoke, Rawhide, The Twilight Zone, Wagon Train, and Zorro.  (Ever whistle the theme to The Andy Griffith Show?  Its official title is “The Fishin’ Hole,” and it was written by none other than Everett himself.)  Sloane had just completed an episode of Honey West when, plagued by fears that he was going blind, he took an overdose of sleeping pills and died in 1965 at the age of 55.  (Ironically, he had played a character who committed suicide in a similar manner in 1960’s Home from the Hill.)