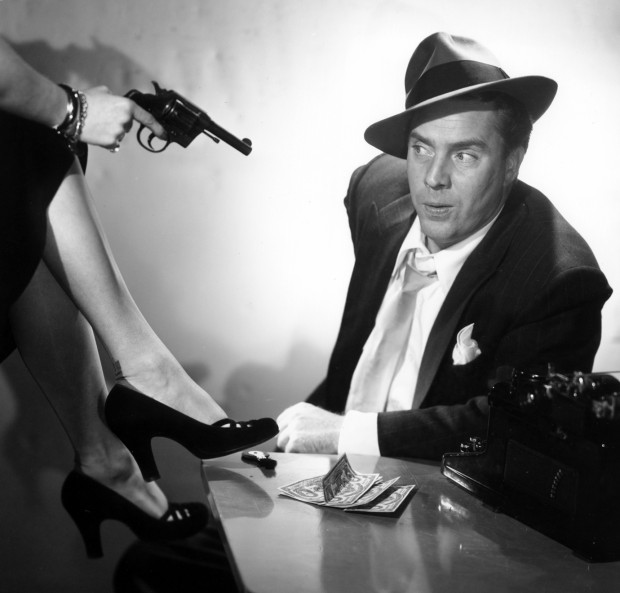 Born on this date in New York City, Redmond O’Brien would go on to become one of the movies’ most beloved and respected character actors…after dropping the “r” in the first part of his name, that is. Edmond would make a standout debut in the 1939 film classic The Hunchback of Notre Dame, and go on to win a Best Supporting Actor Oscar for 1954’s The Barefoot Contessa. But old-time radio fans know that O’Brien also took on the role of “the man with the action-packed expense account” on Yours Truly, Johnny Dollar from 1950 to 1952.

It has been said that while growing up in The Bronx, Edmond O’Brien was a neighbor to the legendary magician Harry Houdini, who encouraged Eddie’s own amateur aspirations to prestidigitation. Dabbling in magic instilled in the young man a desire to study acting and, after majoring in drama at Columbia University, O’Brien made his Broadway debut at the age of 21 in Daughters of Atreus. Ed’s deep voice and mature looks gave him an advantage in the theater—he was able to play roles much older than his actual age. He excelled in a number of Shakespearean productions: he was “The Gravedigger” in John Gielgud’s Hamlet, “Mark Antony” in Orson Welles’ Mercury Theater presentation of Julius Caesar, and “Mercutio” to Laurence Olivier’s “Romeo” when Larry produced Romeo and Juliet.

His stage experience convinced RKO’s Pandro S. Berman to cast him in Hunchback…but after that auspicious debut, most of O’Brien’s film work consisted of fairly standard vehicles such as Parachute Battalion (1941) and Obliging Young Lady (1942). Ed really wouldn’t come into his own in movies until he finished a stint in the service (he’s billed as “Sergeant Edmond O’Brien” in 1944’s Winged Victory) and was cast in a 1946 film based on Ernest Hemingway’s short story “The Killers.” Because of the need to flesh out the details for a full-length feature, O’Brien played the role of an insurance investigator (a foreshadowing of things to come?) looking into the death of a former boxer (played by Burt Lancaster in his film debut). The Killers would establish the actor’s solid noir credentials, and Ed appeared in subsequent “Dark City” films such as The Web (1947), A Double Life (1947) and An Act of Murder (1948).

Edmond O’Brien would receive another plum assignment at Warner Brothers in 1949 when he landed the part of an undercover cop who ingratiates himself with James Cagney’s psychotic criminal in the gangster classic White Heat. A year later, the actor continued his streak of film noirs with entries like Backfire (1950), 711 Ocean Drive (1950) and Between Midnight and Dawn (1950)…and a movie that features one of his finest performances, D.O.A. (1950). In that classic crime tale, Ed is Frank Bigelow, an accountant whose casual notarization of a bill of sale ends up being his death warrant when he’s slipped a radioactive poison; the unforgettable opening has Bigelow stumbling into a police station, babbling that he wants to report a murder…his own!

1950 was also the year that Edmond O’Brien took on the role of “America’s fabulous freelance insurance investigator” on Yours Truly, Johnny Dollar. Ed was no stranger to radio; he had impressive showcases on programs like Suspense and Escape, and made appearances on the likes of Arch Oboler’s Plays, The Lux Radio Theatre, Hallmark Playhouse, The NBC University Theatre, Family Theatre, Screen Directors’ Playhouse and The Cavalcade of America. In fact, if things had worked out differently, O’Brien might have become the star of the program eventually known as Night Beat; he had appeared on a May 19, 1949 audition record for the series (which eventually starred Frank Lovejoy in the fine dramatic offering that ran from 1950-52).

Edmond O’Brien left Johnny Dollar in the capable hands of actor John Lund in 1952, and continued his impressive string of film performances that included offbeat roles as the titular husband of The Bigamist (1953) and “Casca” in MGM’s all-star presentation of Julius Caesar that same year. (O’Brien even had a couple of turns behind the camera, co-directing 1954’s Shield for Murder and later Man-Trap in 1961.) The actor finally received tribute from his peers in 1955 when he was awarded a Best Supporting Actor Oscar for his role as sweaty press agent Oscar Muldoon in 1954’s The Barefoot Contessa (all those years of perspiring in noirs finally paid off!). Ed would continue to make impressions in such memorable classic films as 1984 (1956), The Rack (1956), The Girl Can’t Help It (1956), The Great Imposter (1961), The Man Who Shot Liberty Valance (1962), Birdman of Alcatraz (1962), Seven Days in May (1964—for which he received a second Best Supporting Actor nomination), Fantastic Voyage (1966) and The Wild Bunch (1969).

Edmond O’Brien kept busy on the small screen as well: the programs are not rerun much, but he was the star of a 1960-61 syndicated detective series entitled Johnny Midnight and later played lawyer Sam Benedict on a short-lived NBC series from 1962-63. Ed also guest starred on such hits as Laramie, The Virginian, Mission: Impossible, It Takes a Thief, The Name of the Game, The High Chaparral, The Streets of San Francisco and McMillan & Wife. His last feature film before retiring was 1974’s 99 and 44/100% Dead; he passed away at the age of 69 in 1985.

Curl up with some of Edmond O’Brien’s finest forays on the silver screen; we highly recommend The Hunchback of Notre Dame, The Killers, A Double Life, White Heat, D.O.A., The Hitch-Hiker and The Man Who Shot Liberty Valance…just for starters, you understand! Happy birthday, Ed!