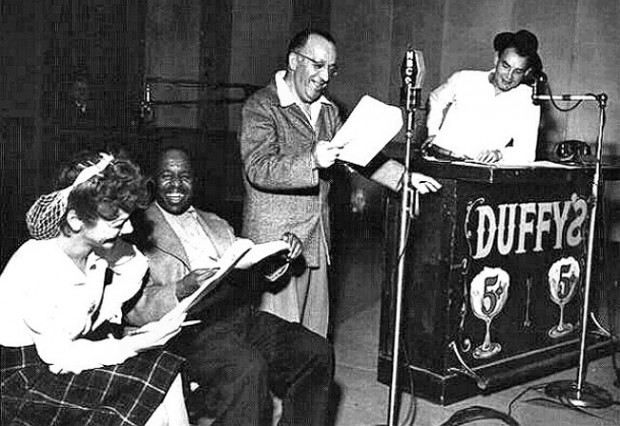 If what I’m hearing are the familiar strains of “When Irish Eyes Are Smiling”—then we’ve apparently stumbled into old-time radio’s most famous watering hole, Duffy’s Tavern:

ARCHIE: Eddie, uh…get me a pail of hot water and a mop, will ya?

EDDIE: What for, you gonna take a bath?

ARCHIE: No, I’m gonna mop up the place…now, uh…lemme get to work here…

EDDIE: You? Going to work?

ARCHIE: Is it such a surprise?

EDDIE: Well…up to now, it’s been one of your hidden talents…

ARCHIE: Oh yeah? Well, that’s all been changed, Eddie—I’m even gonna help you do your work…now, hand me the mop…

EDDIE: Okay, but don’t get too close to me…

EDDIE: Whatever you got, I don’t wanna catch it…look, how come you suddenly wanna do my work?

ARCHIE: Eddie…just because a guy wants to help people, do you have to be suspicious?

The actor who played “Eddie the Waiter”—essentially the “Rochester” to Duffy’s Tavern star Ed Gardner’s “Jack Benny”—was born in Baltimore, MD on this date in 1896.  Eddie Green was a show business veteran at the age of seven, performing as a “boy magician” for a number of churches in and around the Baltimore area.  By fifteen, he was hiring halls in nearby towns and making money with his prestidigitation.  He would abandon his magic act by the time he entered vaudeville, where he earned a hefty salary of $9 a week.

Green also became a fixture in burlesque.  He spent eleven years working as a right hand man for the legendary Billy Minsky, functioning as both writer and comedian.  After leaving Minsky, he started a lucrative career on stage, beginning in 1929 with the musical revue Hot Chocolates.  (Chocolates served as the Broadway debut for Louis “Satchmo” Armstrong, and also featured James Baskett, future Oscar winner for Song of the South.)  Other shows that utilized Eddie’s comedic talents include Blackberries of 1932 (for which he wrote the book), A Woman’s a Fool—to Be Clever (1938), and The Hot Mikado (1939; an all-black version of the Gilbert and Sullivan operetta).

Eddie’s fame as a Broadway performer would later extend to the world of motion pictures.  He made his “talkie” movie debut in a 1929 Vitaphone short, Sending a Wire.  Like the pioneering writer-director-producer Oscar Micheaux, Green later participated in what were known at the time as “race pictures”—films produced with African-American audiences solely in mind.  Eddie wrote, directed, and starred in such features as What Goes Up (1939) and Mr. Adam’s Bomb (1949), and was the producer of titles like Dress Rehearsal (1939) and Comes Midnight (1940).  Green’s other motion picture appearances include Laff Jamboree (1945) and Mantan Messes Up (1946).

The program that would eventually develop into Duffy’s Tavern was first auditioned on the CBS series Forecast.  Technically, Green wouldn’t join Duffy’s until the show premiered over CBS in March of 1941—but he did appear on a Forecast broadcast with the legendary Paul Robson in a production of “All God’s Children” (08/26/40).  Duffy’s would prove to be a splendid showcase for Eddie—the waiter character even shared the same surname, and as OTR historian John Dunning shrewdly observed, Green’s “cunning dialogue contained some of the show’s funniest lines.”  (An interesting note is that Eddie was no stranger to the craft of waiting on tables; he also dabbled in the food business, maintaining a chain of Harlem-based restaurants for a number of decades.)  Eddie, along with Duffy’s co-star Charlie Cantor (a.k.a. “Clifton Finnegan”), would reprise his famous radio role when Ed Gardner brought Duffy’s Tavern to the big screen in 1945.  Considered by many to be a notorious flop, film-wise, the picture actually made money due to its all-star Paramount Pictures cast.

Eddie Green’s other claim-to-fame was his role as Stonewall the lawyer on Amos ‘n’ Andy; never has an individual made the legal profession so disreputable and yet so falling-down-funny at the same time.  Stonewall was a shyster…but you’d be hard-pressed to find a more charming one.  On one broadcast, Stonewall relates to the Kingfish the importance of maintaining positive PR with the public if one plans to run for political office—he himself has been out pressing the flesh and kissing any number of babies and young women.  “Well, what political office are you running for?” Stonewall is asked.  “I ain’t runnin’ for nothin’—I’m just out for the smoochin’!” he replies.  When Ed Gardner relocated Duffy’s Tavern from Brooklyn to Puerto Rico (the program moved for tax purposes), Eddie reluctantly gave up his gig as Stonewall and was replaced by Johnny Lee as “Algonquin J. Calhoun.”  (It just wasn’t the same after that.)

Duffy’s Tavern, sadly, would lose its most beloved employee when Eddie Green succumbed to a heart ailment on September 19, 1950.  If the information in this tribute seems a bit sketchy, it’s because the incredibly talented Green has never really received his proper due as a performer and comedian.  Green’s daughter Elva Diane Green has rectified this slight with the recent Bear Manor Media publication of Eddie Green: The Rise of an Early 1900s Black American Entertainment Pioneer.  It is the very definition of “labor of love,” as Elva researched major archives for more information than we can make available here. (For example, did you know that Eddie wrote the song standard “A Good Man is Hard to Find”?)