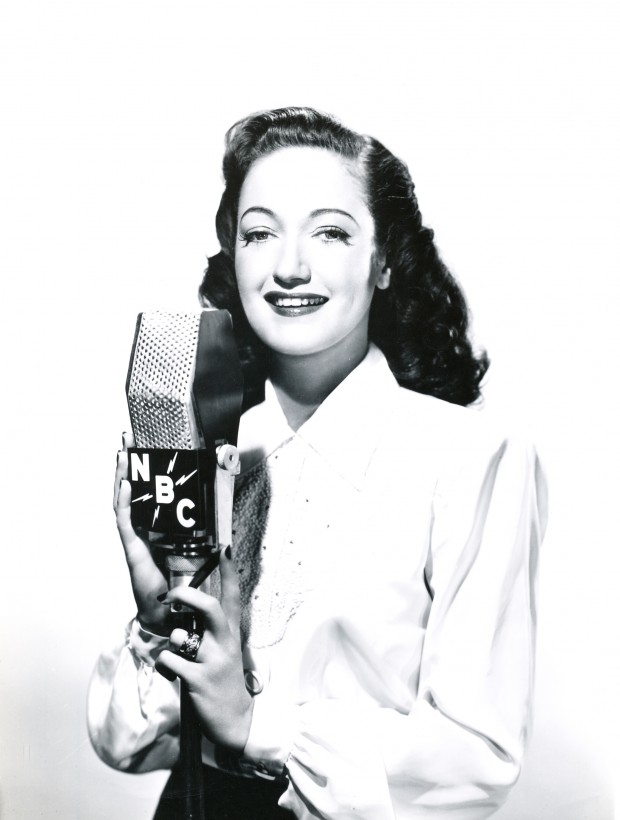 The woman born on this date in 1914 is best remembered by moviegoers as someone who made something as simple as a sarong look mighty good…while traipsing down various roads alongside crooner Bing Crosby and comedian Bob Hope.  But Dorothy Lamour, born Mary Leta Dorothy Slaton in N’awlins (New Orleans), also became a familiar voice through her radio showcases on The Chase & Sanborn Hour in the late 1930s…and later as the hostess of the Sealtest Variety Theater a decade later.

It was Dottie’s voice that got her foot in the door in the world of show business…though her looks and figure didn’t hurt much, either.  She quit school at the age of fourteen and became a secretary (thanks to a business course) to support herself and her mother, who had divorced her father after only a few years of marriage.  Lamour relied on her natural charms to enter beauty contests, and after becoming “Miss New Orleans” in 1931, she used her prize money to support herself while learning her acting craft in a stock theatre company.  While holding down a job as a salesclerk in a Chicago department store, she had the good fortune to be spotted performing in a talent show by orchestra leader Herbie Kay, and Kay hired her to work as the vocalist in his musical aggregation.  After working with both Kay (she was Mrs. Kay from 1935 to 1939) and in vaudeville, the young ingénue was rewarded with her own weekly quarter-hour radio program in 1935; later, she would develop a larger fan following singing on the popular Rudy Vallee program.

A relocation to Hollywood in 1936 laid the foundation for Lamour’s movie career.  She had an uncredited role in her first film at Paramount, College Holiday (1936), but her second venture, The Jungle Princess (1936), cast her in the part of a jungle native named “Utah,” who wore a sarong (designed by Edith Head!) throughout the movie.  A series of films in which Dottie “went native” followed: The Hurricane (1937), Her Jungle Love (1938), Tropic Holiday (1938), Typhoon (1940), Moon over Burma (1940), Aloma of the South Seas (1941) and Beyond the Blue Horizon (1942).  Lamour would become famous for her sartorial trademark—in fact, she performed a song with Paulette Goddard and Veronica Lake in 1942’s Star Spangled Rhythm, “A Sweater, a Sarong and a Peekaboo Bang”—but this would sell her talents woefully short.  She also played change-of-pace parts in vehicles like The Last Train from Madrid (1937), Spawn of the North (1938) and Johnny Apollo (1940).

Her stardom in Paramount films would lead to Lamour’s joining of the powerhouse talent lineup of radio’s The Chase & Sanborn Hour, which premiered over NBC on May 9, 1937.  Though it’s primarily remembered as the program that launched ventriloquist Edgar Bergen and his dummies Charlie McCarthy & Mortimer Snerd to fame, the series also featured the likes of Nelson Eddy, Don Ameche and (for a short time) W.C. Fields, with whom Dorothy would later work in The Big Broadcast of 1938.  On the show, Dorothy got to sing and cavort with the likes of Bergen & McCarthy, who eventually became the stars of the program…and when the contracts of Lamour, Eddy and Ameche were not renewed, the program was whittled down to a half-hour in order to concentrate on Edgar and Charlie (though Dottie would return on occasion as a guest star).

Back in Hollywood, Road to Singapore (1940) probably seemed like just another “sarong” picture to Dorothy…except that her co-stars in this film were Bob Hope and Bing Crosby, and Singapore launched a successful series of “Road” musical comedies that ended in 1962 with The Road to Hong Kong—which made a huge mistake in limiting Dottie’s participation to practically a cameo, instead casting Joan Collins as the straight woman to Hope and Crosby.  Because all three “Roadies” worked at Paramount, Lamour would often appear solo with either Bing (Dixie) or Bob (in several of his comedies, including Caught in the Draft and They Got Me Covered) and was a frequent guest star on their popular radio programs—Bing for Kraft (and later Philco), Bob for Pepsodent.  Hope dubbed Dottie “my favorite brunette,” the title of one of his best film comedies in 1947: a wacky film noir spoof that featured both a menacing Peter Lorre and Lon Chaney, Jr…and in cameos, Bing and Alan Ladd.  Though Lamour deprecatingly referred to herself as “the highest and happiest-paid straight woman in the business,” she rose to the occasion a number times turning in solid dramatic work in movies like Chad Hanna (1940), A Medal for Benny (1945) and Manhandled (1949).

In the summer of 1947, Dorothy became the headliner of Front and Center, an NBC variety series (that filled in for Fred Allen on his summer vacation) designed to boost recruitment in the United States Army.  She told Center’s director Glenhall Taylor: “I can’t sing and I can’t act; it’s up to you guys to make me look good.”  Once again, the years of traveling movie highways and bi-ways with Bing and Bob gave Lamour an opportunity to joke about her talents—but she proved able to hold her own on that series, interacting with guest stars like Dick Powell, Van Johnson and George Burns & Gracie Allen.  The success of Center landed Dorothy a gig on The Sealtest Variety Theatre a year later in the fall of 1948; although the program was sponsored by the dairy concern, fans of the series often referred to it as “The Dorothy Lamour Show.”  For one season, Dorothy invited top celebrities like Ronald Colman, Red Skelton and Gregory Peck to join her and orchestra leader Henry Russell (with the Crew Chiefs) for a solid half-hour of songs, dramatic sketches and comedy patter.  (Later in the season, the program did a slight revamp into a situation comedy format, and added fellow Paramount co-worker Eddie Bracken as Dottie’s second banana.)

By the end of the 1940s, Dorothy Lamour’s movie career had begun to taper off—and although she would still appear in the occasional feature film like The Greatest Show on Earth (1952—a wonderful showcase) and Donovan’s Reef (1963), she diverted her attention to performing in nightclubs and dinner theatre.  Lamour published an autobiography in 1980, My Side of the Road, and could be seen in occasional guest spots on TV series like Hart to Hart and Murder, She Wrote.  One of her final show business contributions was in 1995, acting as a “special advisor” to the Broadway musical Swingin’ on a Star, which featured songs written by Johnny Burke, the composer of much of the material in the “Road” films.  (The actress playing Dottie’s part in the musical’s “road movie” sequence, Kathy Fitzgerald, would be nominated for a Tony Award.)  Dorothy Lamour, whose popularity selling bonds during World War II earned her the nickname “The Bombshell of Bombs,” died in 1996.