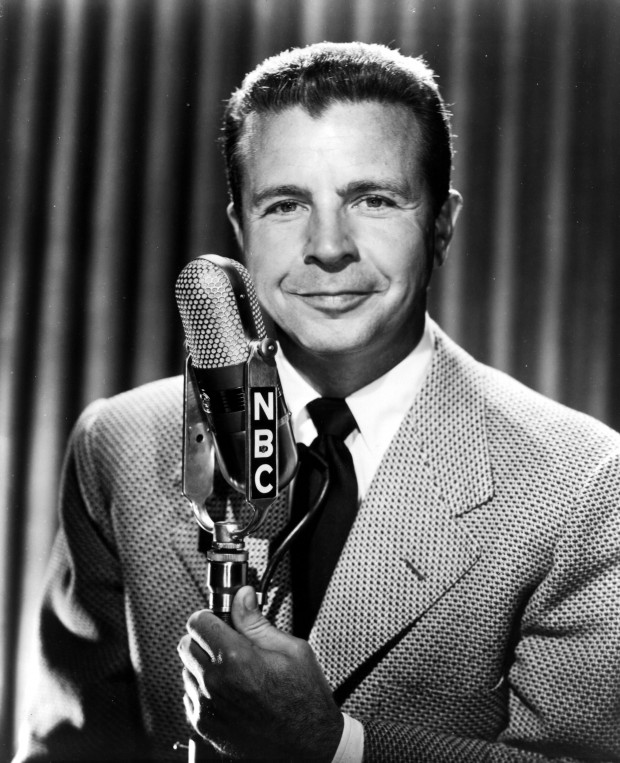 Born in Arkansas in 1904, the man christened Richard Ewing Powell would prove to be one of show business’ true chameleons.  His career is highlighted by a series of reinventions—both as he got older and as people’s tastes in entertainment changed—in every facet of the mediums in which he performed: movies, television…and especially radio.

His show business career began almost immediately after he graduated from college.  He was the male vocalist with Charlie Davis’ orchestra in the mid-1920s and recorded a number of songs with a record label known as Vocation, a subsidiary of Brunswick Records.  When Brunswick was bought by Warner Brothers in 1930, an executive from the company decided to sign Powell to a film contract on the basis of his recorded work.  Dick Powell made his film debut in the 1932 Lee Tracy vehicle Blessed Event (fittingly, he played a bandleader).

Thus began the “chorus boy” phase of Powell’s many film roles.  After additional turns in vehicles like Too Busy to Work (1932) and Just Around the Corner (1933), Dick landed a plum part in 42nd Street (1933).  From that moment on, he graced the cast of practically every musical on the lot with a Busby Berkeley musical routine: Gold Diggers of 1933, 1935 and 1937, Footlight Parade (1933) and Dames (1934), to mention just a few.  Powell’s popularity as a crooner stretched to radio as well: he was the resident vocalist on Hollywood Hotel, an hour-long variety series hosted by gossip maven Louella Parsons.  Every big star in Hollywood (with precious few exceptions) appeared on the program at the bequest of Lolly, who was able to defray the exorbitant cost of each broadcast (it was the first program to be broadcast from the West Coast, at a time when the phone company charged more for the privilege) because of her standing in the film colony.  Celebrities didn’t go home completely empty-handed, however – the show was sponsored by Campbell’s, so guests got a welcoming embrace from Parsons and a case of soup.  (The program later inspired a 1937 film produced by Warner Brothers.)

Dick left Hollywood Hotel for a program entitled Your Hollywood Parade in 1937…and he bid Warner Brothers adios two years later.  The actor signed with Paramount in the hopes of acting in films that didn’t feature “the same stupid story,” but had only modest success with vehicles like Christmas in July (1940) and It Happened Tomorrow (1944).  On radio, Powell continued singing his heart out—he performed as a regular on such shows as Good News of 1940, Southern Cruise and Campana Serenade.  It wasn’t until 1944 that the actor got an opportunity to make a necessary change to his image.

Dick had wanted the part that ultimately went to Fred MacMurray in 1944’s Double Indemnity…but he scored a none-too-shabby consolation prize that same year when RKO tabbed him to play Raymond Chandler’s sleuthing creation Philip Marlowe in a film based on the author’s Farewell, My Lovely (the movie would be titled Murder, My Sweet).  Audiences got their first glance at Dick Powell the tough guy, and yet the actor had a vulnerability that made him the perfect person for the role of the idealistic (if occasionally cynical) Marlowe.  Murder, My Sweet did the trick for Powell; he was then assigned tough-guy roles in films like Cornered (1945), Johnny O’Clock (1947) and To the Ends of the Earth (1948).  He reprised the Marlowe role on a June 11, 1945 Lux Radio Theatre presentation of “Murder, My Sweet,” which gave him a respite from his hosting-singing duties on The Fitch Bandwagon.

With the success of Murder, Dick was able to talk company president F.W. Fitch into letting him do a hard-boiled private eye series during Bandwagon’s summer hiatus.  The show would be called Bandwagon Mysteries—but most listeners referred to it by its alternate title, Rogue’s Gallery.  The show starred Powell as private investigator Richard Rogue, a fairly run-of-the-mill shamus who, when knocked unconscious, would travel to what he referred to as “Cloud Number Eight” in his subconscious and confront his alter ego, “a nasty little spook” known as Eugor (that’s Rogue spelled backward).  Eugor, as played by radio veteran Peter Leeds, existed mainly to taunt and mock our hero in his subconscious state…but would occasionally steer Rogue toward a clue or bit of business that he might have overlooked, thus helping him crack the case.  The success of the summer run of Rogue’s Gallery got the show picked up in the fall, and Powell continued in the role until the show left Mutual at the end of the season.

Rogue’s Gallery later continued for runs featuring Barry Sullivan, Chester Morris and Paul Stewart—but the Powell version became a blueprint for the actor’s best-known radio role: Richard Diamond, Private Detective.  Created by future film director Blake Edwards, Diamond starred Dick as a gumshoe not unlike Howard Duff’s Sam Spade: a hard-boiled character who also possessed a whimsical insouciance that allowed him not to take himself too seriously.  In addition, Powell decided to fall back on the crooner phase of his show business career by allowing Mr. D to warble a tune every now and then, usually to his rich socialite girlfriend Helen Asher (played by Virginia Gregg and Frances Robinson) at the conclusion of his crime-solving endeavors—which earned him the nickname “The Singing Detective.”  With a cast that also included Ed Begley, Ted de Corsia, Arthur Q. Bryan, Alan Reed and Wilms Herbert, Richard Diamond, Private Detective was a successful show for “the big three” (NBC, ABC and CBS) during its run from 1949 to 1953.

At the same time as Richard Diamond, actor Powell continued to progress in his movie career: he continued his tough guy ways in vehicles like Pitfall (1948), Station West (1948) and Cry Danger (1951), and had a memorable role in the all-star MGM production The Bad and the Beautiful in 1952.  Dick also flexed his directorial muscles; holding the reins on motion pictures like Split Second (1953) and The Conqueror (1956).  His decision to stop appearing in front of the camera with 1954’s Susan Slept Here was more of a desire to continue working as a film director, which he did with The Enemy Below (1957) and The Hunters (1958).  But he also got in on the ground floor of television.  With Charles Boyer, David Niven and Ida Lupino he established Four Star Productions—the company that would oversee his forays onto the boob tube in the form of anthology series Dick Powell’s Zane Grey Theatre (1955-61) and The Dick Powell Theatre (1961-63), his last project before his death in 1963.