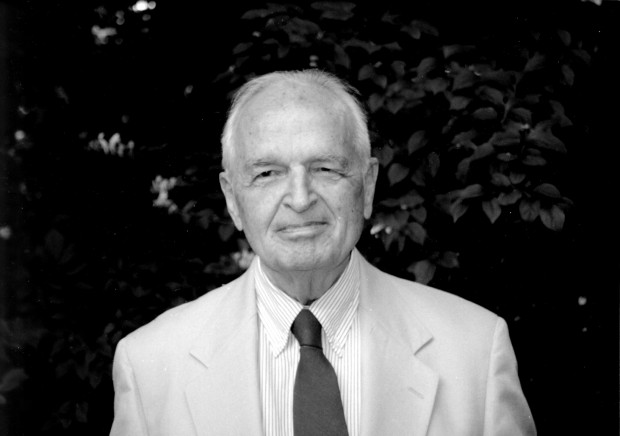 Columbia University student David A. Kogan (born in New York City on this date in 1916) met Robert Jay Arthur, Jr. in his radio writing class. The pair would go on to form one of the most fruitful collaborations in old-time radio. It was a perfect partnership. Kogan already had experience scripting for the medium with efforts for shows like The Shadow and Bulldog Drummond. And Arthur could lay claim to a lengthy list of stories published in nearly every major pulp magazine being sold on newsstands of the day (Weird Tales and Astounding Science Fiction, among others). Their first project—in tandem with WOR producer Jack Johnstone—was a short-lived program entitled Dark Destiny, heard from August 26, 1942 to March 11, 1943.

Despite the brevity of its run, the supernaturally-themed Dark Destiny was essentially a blueprint for what was to follow when Dave Kogan and Bob Arthur pooled their unique talents. Arthur had a preference for specializing in horror-themed scripts (part of his Weird Tales training, no doubt) and Kogan favored those that dabbled in science fiction. Kogan also tackled the directing chores on the program, after his partner let him know he really wasn’t interested in that aspect of radio. From the appropriately titled Dark Destiny, the two men launched the series (with producer-director Jock MacGregor) that would be their longest-running radio venture on December 5, 1943: The Mysterious Traveler. The titular host, portrayed by actor Maurice Tarplin, narrated spooky tales from a club car on a locomotive speeding toward an unknown destination each week. “This is the Mysterious Traveler, inviting you to join me on another journey into the strange and terrifying,” he would say in introducing the program. “I hope you will enjoy the trip, that it will thrill you a little and chill you a little. So settle back, get a good grip on your nerves and be comfortable—if you can!”

The repertory company of actors that appeared on Traveler included many of New York’s experienced radio veterans: Jackson Beck, Lon Clark, Elspeth Eric, Bill Johnstone, Jan Miner, and Santos Ortega—just to name a few of the many. I’ve often facetiously suggested that despite similarities between Traveler and The Whistler (both shows featured stories narrated by omnipresent personages, for example), Traveler had a few advantages over the man who “walked by night” despite the fact that he broadcasted over the Mutual network, considered by many to be radio’s “poor relation.” First, M.T. clearly had the wherewithal to afford a train ticket every week…while his whistling cousin was forced to expend a lot of shoe leather as he travailed over CBS’ West Coast. That was also what separated the two shows: The Mysterious Traveler was heard nationally over Mutual, while The Whistler was limited to areas within driving distance of a Signal Oil station.

The Mysterious Traveler influenced two other Mutual series that depended heavily on previous scripts from the team of Kogan and Arthur. The Strange Dr. Weird was a weekly quarter-hour (the kindly Doc Weird was played by the same thespian who emoted as The Mysterious Traveler, Maurice Tarplin) that recycled a good number of Kogan and Arthur’s Traveler submissions and was heard over Mutual (for Adam Hats) from November 1944 to May 1945. The Sealed Book, a syndicated half-hour produced by Mutual/WOR also salvaged scripts from Traveler during its twenty-six episode run from May to September of 1945. Other Mutual shows that relied on scripts by the Kogan-Arthur team include Adventure Into Fear, Nick Carter, Master Detective, The Shadow, and A Voice in the Night.

If The Mysterious Traveler was David Kogan and Robert Arthur’s longest-running series on Mutual…Murder by Experts was unquestionably their most ambitious. Premiering on Mutual on June 18, 1949, Experts was a cut above the usual mystery anthology in that it concentrated on old-school detective tales selected weekly by Kogan and Arthur, and gussied up with an “endorsement” by the prestigious organization known as The Mystery Writers of America. To add a further bit of esteem, John Dickson Carr (mastermind behind the Dr. Gideon Fell novels and Sir Henry Merrivale mysteries) hosted Murder by Experts in its first season…and the show soon became a favorite of those who worked in the mystery writing field, to the point where the show nabbed an “Edgar” from the Mystery Writers of America in 1949 as radio’s top mystery program.

Had Murder by Experts been fortunate to secure a sponsor—or even sweet-talked a network like CBS or NBC for a berth on their schedule—it might have had a longer run. It left the airwaves on December 17, 1951, which was no doubt disappointing to author Davis Dresser (better known as “Brett Halliday,” the creator of Michael Shayne), who took over for Carr as Experts host in mid-1950. Kogan and Arthur continued their work on Mysterious Traveler (a series that resulted in the team being bestowed with a second “Edgar” in 1952 for Best Radio Mystery Drama), but there were storm clouds on the horizon. Both Kogan and partner Arthur were members of the Radio Writers’ Guild, a union that had run afoul of the House Un-American Activities Committee. HUAC was convinced that the Guild was leading its members, in Kogan’s words, “down the path to Moscow.” (If they indeed were…perhaps The Mysterious Traveler could have arranged for train tickets.) Mutual pulled Traveler into the station on September 16, 1952.

Many sources report the year of David Kogan’s death as 1964, a bit of misinformation that amused Mr. K when he came across this news on an online website in 2009 and felt it his duty to correct the record. “I was surprised to find that I had died in 1964,” he e-mailed Tangent Online. “This means I have been living forty-five years on borrowed time. I begin to see a script shaping up—on whose borrowed time have I been living?” Sadly, three weeks after he sent that e-mail, David Kogan did leave this world for a more fantastic one (his son Kenneth was the bearer of the bad news).