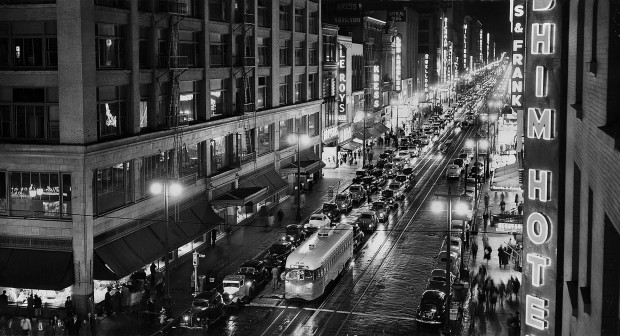 The birth of one of radio’s most prolific and celebrated writers occurred on this date one hundred and two years ago.  David Friedkin, whose ambitions of being an actor-musician (he studied violin at the famed Julliard School) eventually took a back seat to writing for radio…and later television and movies as well.  It’s a little odd to mention Friedkin’s name without adding “and Morton Fine” to complete the thought.  Fine, who was four years Friedkin’s junior, teamed up with David in the 1940s to write for some of radio’s best remembered shows, including Suspense and Escape.  To give you an idea of how interchangeable the two scribes were—an entry written by their one-time boss, Frederic W. Ziv, in the 1959 Radio Annual and Television Year Book identifies them as “Mort Friedkin and David Fine.”  (Well, Ziv might have been too busy counting his money to proofread…who’s to say?)

David and Morton began their prosperous partnership around 1948, when the two men worked in tandem on such series as The Front Page and The Philip Morris Playhouse.  In addition, Friedkin and Fine were the writers responsible for a 1949 audition script entitled “Mark Dillon Goes to Gouge Eye”—which was a building block in what eventually became the Gunsmoke radio series.  They also penned many of the early scripts of the police procedural program The Line Up, though their most famous contribution to the crime drama genre was Broadway’s My Beat, the 1949-54 series directed and produced by Elliott Lewis.  Friedkin and Fine would become valuable employees in Lewis’ stable; they also wrote for Elliott and his wife Cathy’s On Stage series.  Their most fruitful collaboration, however, was their work on Crime Classics—a short-lived but excellent anthology that dramatized crimes of a historical nature.  David and Morton meticulously researched (along with Lewis) each incident that they planned to dramatize each week, and then allowed themselves a little literary license by giving the proceedings a humorously macabre touch.

Friedkin and Fine can also take credit for luring Humphrey Bogart to radio during the time they worked for Ziv.  Bogie had been approached about doing a weekly over-the-airwaves program in the past (including a 1949 audition entitled “Dead Man”), but the actor wasn’t too anxious to commit himself to a live microphone every week.  The syndicated series that Friedkin and Fine pitched to him—which would eventually premiere as Bold Venture—would accommodate the actor’s schedule, allowing him (and his co-star, wife Lauren Bacall) to do 3-4 shows a week ahead of time, freeing the pair to continue their movie work.  Bogie and Baby collected $4,000 per episode of Bold Venture and the series went on to be one of Ziv’s most popular ventures.  As soldier-of-fortune Slate Shannon, Bogart owned both a hotel and the boat of the program’s title…and engaged in weekly misadventures with his “ward,” Sailor Duval (Bacall) in the Caribbean.  The success of the show (it was syndicated to over 400 radio stations) later ensured its transition to a television version in 1959 (on which David later wrote and directed), with Dane Clark and Joan Marshall as Shannon and Duval.

Bold Venture was just one of many television shows that David Friedkin would oversee—not only as a writer, but as a director and producer as well.  He penned scripts for such series as Frontier, Target, The Aquanauts and The Case of the Dangerous Robin…while directing and/or producing the likes of Bat Masterson, The Rifleman, Dr. Kildare, The Alfred Hitchcock Hour, Breaking Point and The Virginian.  His most famous contribution to the cathode ray tube—again, in tandem with Morton Fine—was the successful espionage series I Spy, which ran on NBC-TV from 1965 to 1968 and starred Robert Culp and Bill Cosby as a pair of spies masquerading as an amateur tennis player (Culp) and his trainer (Cos).  I Spy was an audience favorite for its tongue-in-cheek approach to the spy genre, and was responsible for catapulting Cosby to TV stardom (the program would garner the actor-nightclub comedian three consecutive Emmy Awards for his work).  David even resurrected his dormant acting ambitions to appear in two I Spy episodes (as did partner Morton Fine).

Friedkin would finish out his career in television, although he did step behind a motion picture camera on a couple of occasions. His silver screen efforts include Hot Summer Night (1957) and Handle with Care (1958), but he turned over the reins to Sidney Lumet for his most successful film project, 1965’s The Pawnbroker (co-written with Fine).  The movie starred Rod Steiger as the titular character who’s haunted by past demons as a Holocaust survivor, and is today considered one of Lumet’s most accomplished films.  Before his death on October 15, 1976, David Friedkin would continue to work as a writer, director and producer on popular series such as Hawaii Five-O, Ironside, The Streets of San Francisco, Kojak and Barnaby Jones.