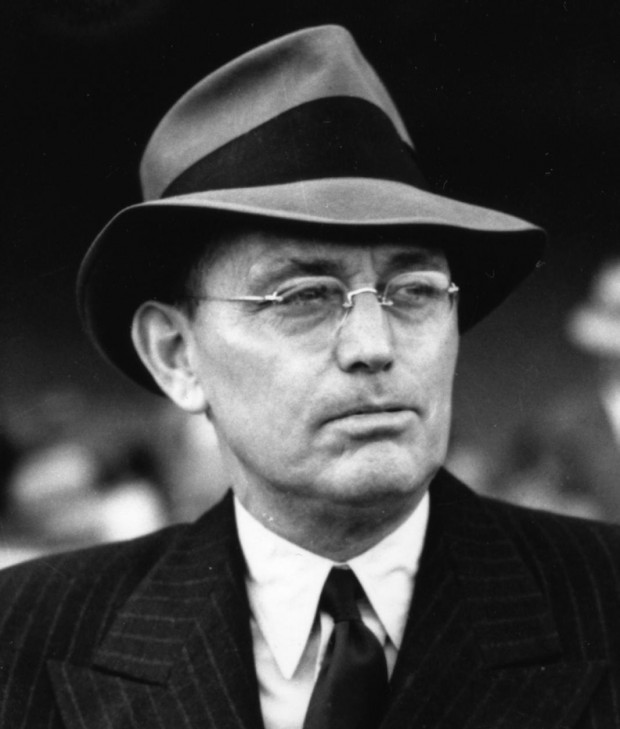 The Oxford Dictionary defines the term “Runyonesque” as “of, relating to, or characteristic of Damon Runyon or his style, language, or imagery; especially characterized by plot or language suggestive of gangsters or the New York underworld.”  For those were the denizens of Broadway that Runyon wrote about in his humorous and sentimental tales.  The author was born Alfred Damon Runyan on this date in 1880 in Manhattan…Kansas (NOT New York)…but you’d never know that from his short stories, which centered on the various gamblers, boxers, actors, grifters and hustlers that populated the Great White Way.  Damon’s literary contributions provided fodder for movies, television…and particularly radio, in the form of The Damon Runyon Theatre.

Damon Runyon was born to be a newspaperman.  No doubt due to the amount of printer’s ink in the blood of his family: his grandfather had been a printer in New Jersey and his father a Manhattan editor (before being forced to sell his paper and move west in 1882).  The Family Runyan eventually put down stakes in Pueblo, CO by 1887.  Pueblo is where young Damon spent the largest part of his youth—that’s where you’ll find Runyon Lake, Runyon Field, and the Damon Runyon Repertory Theater Company, in case you’re making room on the itinerary for your next vacation.

Most accounts note that the young Damon only got as far as the fourth grade scholastically, but this didn’t keep him from pursuing a journalism career.  He began working for various Colorado and Rocky Mountain newspapers under his father’s tutelage before that was interrupted in 1898 when the teenage Damon enlisted in the U.S. Army to fight in the Spanish-American War.  The life of a doughboy didn’t discourage Runyon’s literary aspirations, though—he was pressed into service to write for both the Manila Freedom and Soldier’s Letter.  When his hitch was up, he returned to Pueblo and got his first job as a reporter for The Pueblo Star.  Damon then moved on to the Rocky Mountain area, beginning with a stint as a reporter and sports editor for The Denver Daily News.  There were a lot of newspapers that employed the future author between 1900 and 1910 (Runyon also contributed short stories to Collier’s and McClure’s), and somewhere along the way, the spelling of “Runyan” was changed to the now-familiar “Runyon.”

Damon Runyon relocated to New York in 1910.  He perfected his sportswriting skills at the Hearst-owned New York American, where his “beat” included covering both boxing and the New York Giants.  Runyon had dropped the “Alfred” from his byline by this time and, after leaving the American, he started a syndicated newspaper column titled Th’ Mornin’s Mornin’…later to be called The Brighter Side.  Damon also continued to indulge his short story ambitions, and his submissions began to grace such publications as The Saturday Evening Post and Cosmopolitan.  His contributions to sports journalism would win him two important honors: induction into the writers’ wing of The Baseball Hall of Fame in 1967, and The International Boxing Hall of Fame in 2002. (Runyon was the man who nicknamed pugilist James J. Braddock “The Cinderella Man.”)

Nicknames came naturally to the author—in Damon Runyon’s world, the inhabitants go by such unforgettable monikers as “Dave the Dude,” “Harry the Horse” and “The Seldom Seen Kid.”  In addition to “Runyonesque,” the term “Runyonese” was coined to describe these characters’ one-of-a-kind vernacular:  a mixture of formal speech and offbeat slang (peppered with terms like “roscoe,” “snoot” and “pineapple”), generally spoken in the present tense and often devoid of contractions.  Many of Damon’s tales would be adapted for the silver screen; the earliest appears to be Frank Capra’s Lady for a Day (1933), based on his “Madame La Gimp”—it was remade by Capra in 1961 as Pocketful of Miracles.

One of Runyon’s best-remembered short stories, “Pick a Winner,” figured in the plot of four feature films.  The first was in 1934, when “Winner” was adapted as Little Miss Marker (1934), one of Shirley Temple’s earliest vehicles.  “Winner” surfaced again in 1949 (as Sorrowful Jones, starring Bob Hope) and 1962 (40 Pounds of Trouble, starring Tony Curtis) before returning to its Little Miss Marker title in 1980 (in a version starring Curtis and Walter Matthau).  Damon’s “The Lemon Drop Kid” was filmed in 1934 (with Lee Tracy) and 1951 (Bob Hope).  “A Slight Case of Murder,” a 1935 play that Runyon co-wrote with Howard Lindsay, met moviegoers in 1938 with an Edward G. Robinson film and, later, with the 1953 remake Stop, You’re Killing Me, with Broderick Crawford.

The most familiar of Damon Runyon’s works to achieve silver screen status is Guys and Dolls (1955).  Inspired by the 1950 Broadway success (winner of the Tony Award winner for Best Musical), which was co-written by former Duffy’s Tavern scribe Abe Burrows (with music and lyrics by Frank Loesser).  Two separate Runyon stories inspired this hit: “The Idyll of Miss Sarah Brown” and “Blood Pressure.”  Other “Runyonesque” feature films include Princess O’Hara (1935—remade in 1943 with Abbott & Costello as It Ain’t Hay), Professional Soldier (1935), The Big Street (1942), Butch Minds the Baby (1942), Johnny One-Eye (1950), and Money from Home (1953).

On radio, Damon Runyon owes a debt of gratitude to Alan Ladd.  Sure, Runyon’s stories had been previously featured on such programs as The Columbia Workshop, The Harold Lloyd Comedy Theatre, The Radio Reader’s Digest, and The Screen Guild Theatre—but it was Ladd and his business associate Bernie Joslin who conceived the idea of a weekly dose of Damon after experiencing syndicated success with their company Mayfair Productions (responsible for Ladd’s Box 13).  The Damon Runyon Theatre, a half-hour anthology, would draw upon inspiration from the author’s inexhaustible portfolio of colorful tales.

Theatre had originally been planned for actor Pat O’Brien to host…but when Pat was called back to complete reshoots on The Boy with Green Hair (1948), Mayfair had to go with their second string—radio veteran John Brown got the nod to narrate the tales as “Broadway.”  In retrospect, Brown was the perfect choice: he was already playing a Runyonesque character on My Friend Irma as Al, Irma’s shady loafer boyfriend.  A total of fifty-two episodes of The Damon Runyon Theatre were produced; though the series began in October of 1948, the syndicated shows were still rerun as late as 1951.  CBS later brought a television version of the show to its schedule from April 1955 to February 1956.

Sadly, the man who inspired The Damon Runyon Theatre would never get to hear how well his stories fared on that series; Damon Runyon died in 1946 at the age of 66.