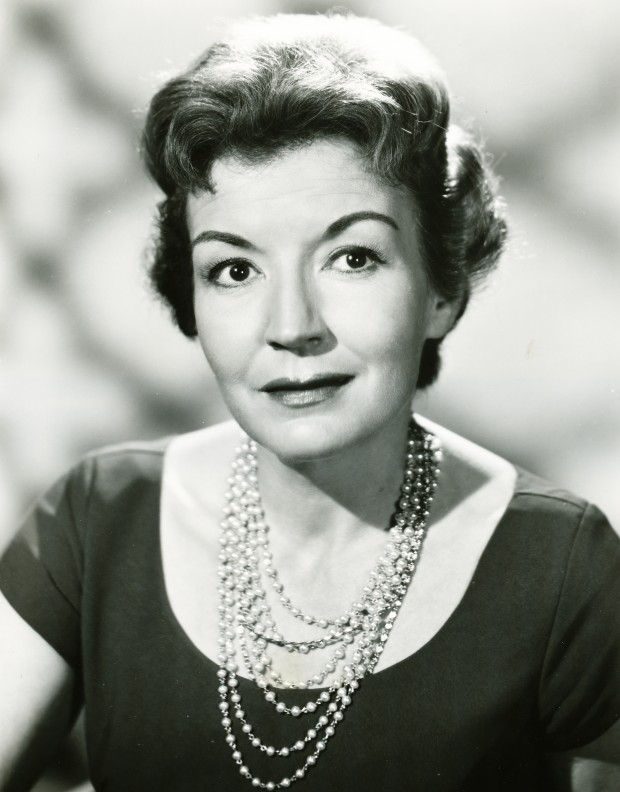 When radio actress Cathy Lewis—born on this date in Spokane, Washington in 1916—married actor-director-producer Elliott Lewis (who would later become known as “Mr. Radio”) in 1943, she didn’t even have to take her husband’s surname.  That’s because Cathy Lewis was actually born “Cathy Lewis,” and their union (making them “Mr. and Mrs. Radio”) would bear much fruit in the aural medium, culminating in the critically-acclaimed dramatic anthology On Stage from 1953 to 1954.  But I’m getting a little ahead of the story…

Cathy left Washington and arrived in Hollywood in 1936 with the expressed desire to become a female vocalist—something that she did for a short while with bandleader Kay Kyser’s orchestra.  But she also had aspirations of becoming an actress, and after an apprenticeship with the Pasadena Playhouse, she was signed by Metro-Goldwyn-Mayer to a contract.  Her stint at MGM involved a lot of extra work and bit parts; she can be seen in one of the studio’s Crime Does Not Pay shorts (“Soak the Old”) and a couple of entries from the Dr. Kildare series (Dr. Kildare’s Crisis, Dr. Kildare’s Wedding Day).  Lewis, billed as “Catherine” Lewis, also shows up in a 1941 PRC Harry Langdon quickie, Double Trouble, and an MGM B-picture starring Van Heflin, Kid Glove Killer (1942), that occasionally plays on Turner Classic Movies.

Her film career might not have been going anywhere…but it was a different story when Lewis stood in front of a radio mike.  She began to get jobs on shows like Lights Out, The Lux Radio Theatre, Theatre of Romance, Michael Shayne, Private Detective, The Philip Morris Playhouse and The Adventures of Sam Spade.  Cathy was one of “Whistler’s children,” the nickname given to the loose repertory company that frequently appeared on the West Coast radio mystery smash, The Whistler.  She would also find herself a frequent player on “radio’s outstanding theatre of thrills,” Suspense; she played the female lead opposite Robert Taylor in one of that program’s best-remembered playlets, “The House in Cypress Canyon,” and emoted next to Cary Grant in an equally famous Suspense broadcast, “On a Country Road.”  Cathy’s marriage to Elliott Lewis in 1943 allowed them to work together on such programs as Twelve Players, The Clock and The Voyage of the Scarlet Queen (on which Elliott starred as Philip Carney, skipper of the titular vessel), but their best known collaboration was on the series On Stage, in which the Lewises performed in first-rate mysteries, adventures and comedies.  Mrs. Radio also made appearances on two other series overseen by her husband, Broadway’s My Beat and the aforementioned Suspense.

Cathy Lewis would be no stranger to radio comedy.  She worked on series headlined by Rudy Vallee, Eddie Bracken and Dennis Day, and it was her experience on these shows that lured her to an audition for a new situation comedy created by a writer named Cy Howard…one that would become known as My Friend Irma.  The legend goes that Cathy, late for another appointment, began to grow a little impatient during her Irma audition…and loving that irritated quality in her voice, Howard gave her the job.  As sardonic roommate Jane Stacy, Cathy would co-star with Marie Wilson (as Irma) on the hit sitcom from 1947 to 1953; she left the program in its last radio season (and its second on TV) and was replaced by Mary Shipp (as Irma’s new roomie, Kay Foster).  At the same time that Lewis was working on Irma she was also appearing on The Great Gildersleeve as Nurse Kathryn Milford, one of the many girlfriends that Throckmorton P. Gildersleeve, water commissioner in the town of Summerfield, acquired during his long radio run.

Cathy and Elliott Lewis divorced in 1958, and though Cathy continued to perform on radio she found new vistas in her entertainment career.  Her film appearances at this time include The Party Crashers (1958) and The Devil at O’Clock (1961), and she appeared briefly alongside comic actor Bob Sweeney in an ill-fated attempt to bring Fibber McGee & Molly to TV screens in the fall of 1959.  (As you’ve probably surmised, Cathy played Molly…but the show only lasted a few months.)  Lewis made guest appearances on series like The Danny Thomas Show, Death Valley Days, The Farmer’s Daughter and F Troop—she had a funny recurring role as Deirdre Thompson, the snobbish sister of attorney George Baxter (Don DeFore) who employed the meddlesome maid played by Shirley Booth on Hazel.  Cathy Lewis passed away from lung cancer in 1968.