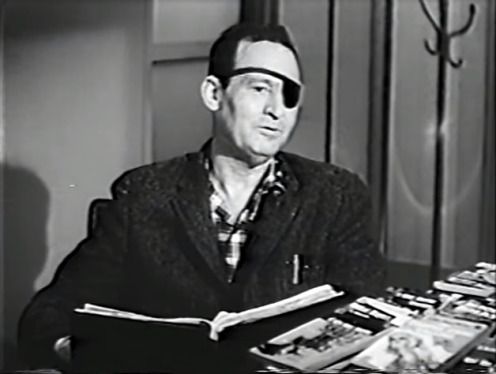 If we were to truly recognize the birthday of author Brett Halliday, we’d have to settle in for a series of blog posts.  “Brett Halliday,” the author who brought the adventures of detective Michael Shayne to life on the printed page, was a pen name used by any number of hard-working mystery scribes, including Bill Pronzini, Robert Terrall, Ryerson Johnson, and Dennis Lynds.  (This is the reason why “that reckless, redheaded Irishman” enjoyed such a lengthy run in the literary sleuthing world—with 77 books and 300 short stories in his shoulder holster.)  For the sake of tidiness, we’ll focus instead on the original Halliday—Davis Dresser, born in Chicago on this date in 1904.

If you’ve noticed in the photo on the left that Mr. Dresser is sporting a rather stylish eyepatch…well, it was more necessity than the height of fashion.  Though he was born in the Windy City, Dresser spent most of his boyhood in West Texas…and an incident involving barbed wire took out his left eye.  His wanderlust inspired him to run away from home at the age of 14, where he enlisted in the U.S. 5th Cavalry Regiment at Fort Bliss, Texas.  He followed that stint with a year in the Border Patrol on the Rio Grande.  Davis would eventually return to finish high school, but promptly continued leading “a life of romantic adventure” (to quote a well-known radio program).  He toiled in any number of jack-of-all-trades jobs (muleskinner, farmhand, deckhand) before finally deciding to enroll in the Tri-State College of Engineering.  Receiving a certificate in civil engineering, Dresser found work as an engineer and surveyor in Texas before switching to a writing career in 1927.

Davis Dresser’s life as a wanderer provided him with the inspiration for the literary creation that later paid for his food, clothing, and shelter.  He based the character of Michael Shayne on an American he encountered in a Tampico, Mexico bar (while Davis was working as a deckhand on an oil tanker).  A fracas broke out one night and Dresser was rendered unconscious — thanks to a beer bottle to the head.  The unnamed American pulled him out of the cantina so that Dresser’s comrades could attend to him with a little first aid.  Dresser would cross paths with this same gentleman in a bar in New Orleans’ French Quarter years later, and approached the man to reminisce about their Tampico misadventure.  Halliday related this encounter in Otto Penzler’s The Great Detectives: The World’s Most Celebrated Sleuths Unmasked by Their Authors:

A wide grin came over his face and he started to say something when a sudden chill came over his features.   He was looking past me at the front door and I turned my head to see what he was seeing. Two men had entered the bar and were making their way toward us.  He tossed off his cognac and slid out of the booth as they stopped beside us.  He said harshly to me, “Stay here,” and started down the aisle with one burly man leading the way and the other following close behind.  Thus they disappeared in the French Quarter, and I’ve never seen him again.

Dresser never forgot the man, and when he decided to write a mystery novel “there was never any question as to who my hero would be.”  That book was entitled Dividend on Death, a book that was rejected by 22 publishers before Davis decided to lay it aside.  Dresser wrote another novel, Mum’s the Word for Murder, under the pseudonym of Asa Baker…and had a bit more success on the publishing side when he received only 17 rejections; the book would eventually be published by Frederick Stokes’ company.  A Stokes salesman and a representative from Henry Holt and Company visited Davis not long after the publication of Mum’s. When the author mentioned that he felt Dividend was a better mystery, the Henry Holt salesman suggested he send it to the company.  It turns out that Holt was just starting a new mystery line.  Bill Sloane, Holt’s editor, gave Dividend the thumbs-up and sent Dresser a contract.

Dresser’s second Shayne novel, The Private Practice of Michael Shayne, proved to be every bit as successful as Dividend on Death…and prompted 20th Century-Fox to buy the novel for the purpose of instituting a film series based on the character.  (Actor Lloyd Nolan would play Shayne in seven B-mysteries, beginning in 1940 with Michael Shayne, Private Detective.)  The seven films produced by Fox, however, did not use any of Davis’ Shayne mysteries; instead, they bought books written by Dresser’s competitors and just changed the name of the lead character to Michael Shayne.  When Dresser asked why, he was told it was because he had married off his detective in his books and “it was against their policy to use a married detective.”  So, Dresser decided to kill Mrs. Shane off (she dies in childbirth) …only to learn that Fox was going to drop the series shortly before the first book without Michael’s wife (Blood on the Black Market—a.k.a. Heads You Lose) was published.

Michael Shayne’s success in motion pictures continued with five more B-pictures at Producers Releasing Corporation between 1946 and 1947 — featuring future Leave it to Beaver dad Hugh Beaumont as Shayne.  Meanwhile, Dresser’s creation was also making a splash in radio, beginning in 1944 with a program that starred Wally Maher as the tough-as-nails investigator.  That series would last until 1947, but would later resurface in 1948 as The New Adventures of Michael Shayne — this time with Jeff Chandler in the role.  The detective’s last radio gig was in 1952’s The Adventures of Michael Shayne on ABC, with Donald Curtis, Robert Sterling, and Vinton Hayworth all taking turns at the microphone before the series bowed out in July of 1953.  On the small screen, Dresser’s creation was played by former “Mr. North” Richard Denning in an NBC-TV series that ran from 1960 to 1961.

Davis Dresser was not only prolific as “Brett Halliday”—he also wrote under such pen names as Asa Baker, Matthew Blood, Kathryn Culver, Don Davis, Hal Debrett, Anthony Scott, Peter Field, and Anderson Wayne.  His Halliday persona was his best known, however; he even “portrayed” Halliday on Murder by Experts, a 1949-51 Mutual radio program that he hosted/narrated along with John Dickson Carr (and later film director Alfred Hitchcock).  The show featured mystery tales adapted by the duo responsible for The Mysterious Traveler: David Kogan and Robert A. Arthur.  Dresser continued to pen Michael Shayne mysteries until 1958 (Murder and the Wanton Bride was Dresser’s swan song).  The character continued to appear in comic books, short stories, and novels courtesy of other authors until 1985, when Michael Shayne Mystery Magazine ceased publication.  Dresser, a founding member of the Mystery Writers of America, won an Edgar Award in 1954 for his critical writings on the mystery genre.  He also founded the Torquil Publishing Company, in operation from 1953 to 1965.  He died in 1977 at the age of 72.

At the same time that Jeff Chandler was getting laughs as “the bashful biologist,” Philip Boynton, on radio’s Our Miss Brooks…he was also emoting as our birthday celebrant’s sleuth on The New Adventures of Michael Shayne.