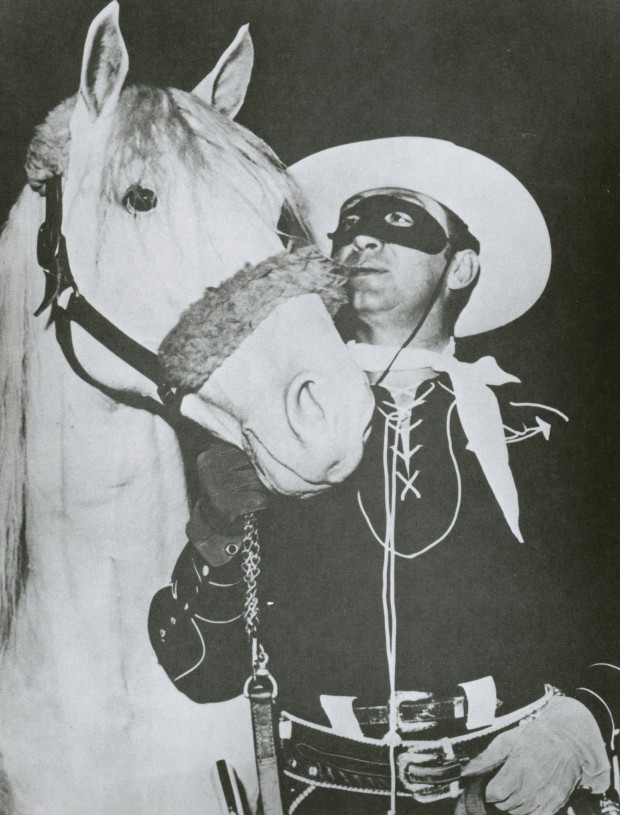 On April 8, 1941, an actor named Earle Graser was killed in an automobile accident.  A tragic event to be sure, but what compounded this tragedy was that Graser had a devoted fan following as the voice of The Lone Ranger.  This popular radio western adventure series had been broadcasting from the WXYZ Detroit studios since January of 1933.  To ease into the transition of a new actor taking over as the Ranger, the show broadcast five episodes in which the character was so injured that he could barely speak above a whisper. (His faithful Indian companion Tonto found himself at the center of the show’s action during his friend’s convalescence.)  At the end of that story arc, The Lone Ranger then introduced the thespian who would portray “the daring and resourceful Masked Rider of the Plains” until the series’ cancellation on September 3, 1954.  That man was born in Mount Carmel, Illinois on this date in 1902—Brace Beemer.

Brace Beemer was the son of Bertina (Bell) and Joseph D. Beemer, and attended high school in Vincennes, Indiana (the birthplace of another radio great, Red Skelton).  Beemer didn’t concentrate on his studies for long, however; he made the decision to enlist at the age of 14.  Successfully misrepresenting his actual age, he served during World War I as the youngest sergeant in that conflict.  He was wounded in action in May of 1918 in France as a soldier with the 150th Field Artillery, Battery E.  This resulted in his being sent home and discharged once his true age was discovered.

In 1922, Brace entered radio with a job at an Indianapolis station.  A few years later, a sales manager from Detroit’s WXYZ heard Beemer reading poetry over that station, and hired him to work for WXYZ on the spot.  At “Wxyie Wonderland,” Brace did some announcing in his capacity as station manager…and at one time, could have taken over from George Stenius (future film director George Seaton) when that actor quit the role of the Ranger after a few months in 1933.  (Brace briefly left WXYZ to start his own advertising agency.)  Upon his return to the station, Beemer was pressed into service to portray The Lone Ranger in publicity appearances…since he physically looked the part, was an expert horse rider, and a crack shot.

Brace Beemer’s appearances as the Ranger in public and on radio made him a natural choice to replace Graser.  Beemer’s deep, mellifluous voice (and his real life riding and shooting prowess) eventually convinced the public that he was The Lone Ranger.  “Never cheat the public and never fake an act,” was the actor’s credo, as he attended rodeos, circuses, benefits, football games, etc. as radio’s most famous Masked Man.  He enjoyed friendship from celebrities as wide-ranging as Eleanor Roosevelt and J. Edgar Hoover, and brightened the day of many hospitalized children, who unquestionably received a real treat when Brace showed up in full Ranger regalia.  (Truth be told, the reason why Beemer became so identified with the character is that he was contractually obligated to play that role—and only that role—until the program left the airwaves.)

The Lone Ranger transitioned to a television series that premiered over ABC-TV on September 15, 1949.  Despite all the public appearances he had made as the character, Brace Beemer was ultimately eliminated from consideration for the TV role because he had little experience in film.  (Beemer preferred live action to television, anyway.)  Clayton Moore, an experienced movie veteran, imitated Beemer’s “sound” as the small screen Ranger, playing the part (though the role was also briefly played by John Hart after Moore was let go due to a salary dispute) until the TV show was cancelled in 1957.  Brace’s tenure as the radio Ranger ended in September of 1954, and he moved on to portray another WXYZ hero in Sergeant William Preston on Challenge of the Yukon (Sergeant Preston of the Yukon), taking over for Paul Sutton.

In retirement, Brace Beemer became a resident of Oxford Township, Michigan, where he lived on a 300-acre farm affectionately known as “Paint Creek Acres” with his wife Leta, raising thoroughbred horses and subdividing land as a contractor.  The equine who played “the great horse Silver” also made Paint Creek his home (and rumor has it that Silver was eventually buried on the property upon his death).  For a time before his death in 1965, Beemer had resurrected his famous role on a series of automobile commercials broadcast over several Michigan radio stations.  A Radiola Records release of The Lone Ranger in the 1970s featured the last recorded interview with the actor before he passed away while playing bridge on March 1, 1965.