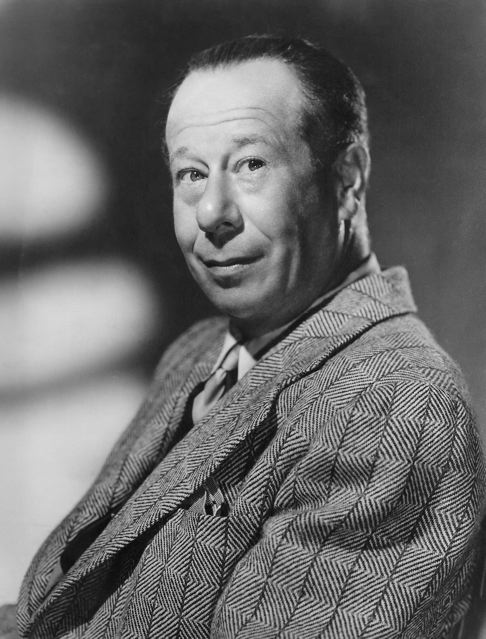 In his indispensable reference book The Great Movie Shorts, film historian Leonard Maltin made this observation of Leon Errol: “There are comedians, comics, and a few clowns around, but funnymen are hard to find.  A funnyman can be amusing under any circumstances; he doesn’t need stories to support him, as comedians do; he doesn’t need jokes, as comics do; and he doesn’t need particular settings, as clowns do.  He is funny in himself.”

I’ve always felt that “funnyman” was the perfect word to describe Bert Lahr—born Irving Lahrheim on this date in New York City in 1895.  If you mention Lahr’s name to someone familiar with classic movies, chances are the first thing that will come to mind is his wonderful performance as The Cowardly Lion in the timeless movie musical The Wizard of Oz (1939).  But Bert’s career transcended that role; he established himself as a one-of-a-kind performer in vaudeville, burlesque, and on the Broadway stage…making stops in radio, movies, and television along the way.

The son of German Jewish immigrants, Bert Lahr grew up in the Yorkville section of Manhattan, dropping out of school at age 15 to join a vaudeville act.  From that beginning, Bert paid his dues until he eventually worked up to top billing on the Columbia Burlesque Circuit.  The unique entertainment style of burlesque was a starting point for many stars—Abbott and Costello, Milton Berle, Jimmy Durante, and Phil Silvers are just a few of the familiar names.  But it’s important to remember that many burlesque performers never advanced beyond burlesque; it took a special kind of entertainer to move on to bigger things.  Lahr was one such performer; he made his Broadway debut in a show called Harry Delmar’s Revels (1927).  One of the highlights of that revue was Bert’s rendition of “The Song of the Woodsman”—which he later performed in the feature film Merry-Go-Round of 1938.

Though his motion picture debut was in a 1929 Vitaphone short entitled Faint Heart, it was his reprisal of the role of an eccentric aviator from Flying High that brought Bert Lahr into feature films when the Broadway show was adapted for the silver screen in 1931 (his co-star was the long-legged Charlotte Greenwood).  Throughout the 1930s, Bert supplemented his stage work with occasional film appearances. Educational Pictures even featured him in a series of two-reel comedy shorts that ranged from abysmal (No More West) to delightful (Off the Horses).  Truth be told, the movies were never really able to accommodate Lahr; his style of performing was a bit too broad to capture on celluloid…but he certainly gave it the old college try in vehicles like Love and Hisses (1937), Just Around the Corner (1939), and Zaza (1938).

Bert Lahr and motion pictures achieved harmony when he was cast as The Cowardly Lion in the M-G-M musical The Wizard of Oz.  His contract with the studio that boasted “more stars than there are in Heaven” stipulated he would receive $2500 a week…and even then he had to haggle.  (The studio was only going to offer him five weeks of work—Lahr held out for six.)  As it happened, shooting on Oz commenced over a period of several months, so Bert ended up making more than he had originally negotiated.  Oz is inarguably Lahr’s finest hour on screen; when warned that the role might typecast him Bert cracked: “Yeah, but how many parts are there for lions?”  (He would become so identified with the role that a biography written by his son John—a drama critic for The New York Times—was appropriately titled Notes on a Cowardly Lion.)  He would continue his association with M-G-M in such musicals as Ship Ahoy (1942) and Meet the People (1944).  He uttered his famous “Heavens to Murgatroyd!” in the latter film…providing the inspiration for Hanna-Barbera’s pink cartoon lion Snagglepuss.

Bert Lahr’s career on radio experienced the same setbacks that it encountered in feature films.  Despite having an “unforgettable bawl of a voice” (as described by Gerald Nachman in Raised on Radio), Lahr was often nervous in front of a microphone (he frequently twisted buttons off his shirt) and resorted to his trademark mugging to get a reaction from the studio audience (while listeners at home wondered what was so funny).  Still, Bert did the best he could in the aural medium; he appeared as a guest on Fred Allen’s program a number of times (resulting in some very funny broadcasts), and joshed with the likes of Rudy Vallee, Bing Crosby, and Edgar Bergen (and Charlie McCarthy) while guesting on such shows as Good News of 1939, Command Performance, The Philco Radio Hall of Fame, and The Theatre Guild On the Air.

One of Bert Lahr’s most memorable film turns was a supporting role in Always Leave Them Laughing (1949).  It harkened back to his burlesque days (the movie’s star was fellow Burly-Q veteran Milton Berle) and even allowed him to perform his legendary “Stop in the name of the stationhouse!” routine.  Bert continued to make occasional appearances in movies like Mister Universe (1951) and Rose Marie (1954), but by that time he was starting to make inroads into television.  His small screen triumphs include live performances in Cole Porter’s Let’s Face It and Anything Goes (with Ethel Merman and Frank Sinatra), both in 1954; a version of The Fantasticks in 1964; guest appearances on Jack Benny and Red Skelton’s shows; and turns on The Eleventh Hour and Bob Hope Presents the Chrysler Theatre.

Lahr’s farewell film appearance was a small role as “Professor Spats” in The Night They Raided Minsky’s (1968).  Bert passed away from undiagnosed cancer (the newspapers originally reported pneumonia) at the age of 72 in 1967.  Though he had fortunately filmed most of his scenes ahead of time, director Norman Lear did have to resort to a little trickery (including a voice double and body double—fellow burlesque veteran Joey Faye) to make certain Lahr’s performance stayed in the film.  Minsky’s offers a splendid valedictory tribute to the funnyman who convulsed audiences with helpless laughter…if you’ve not had the pleasure of sitting down with this movie I urge you to do so at your earliest opportunity.