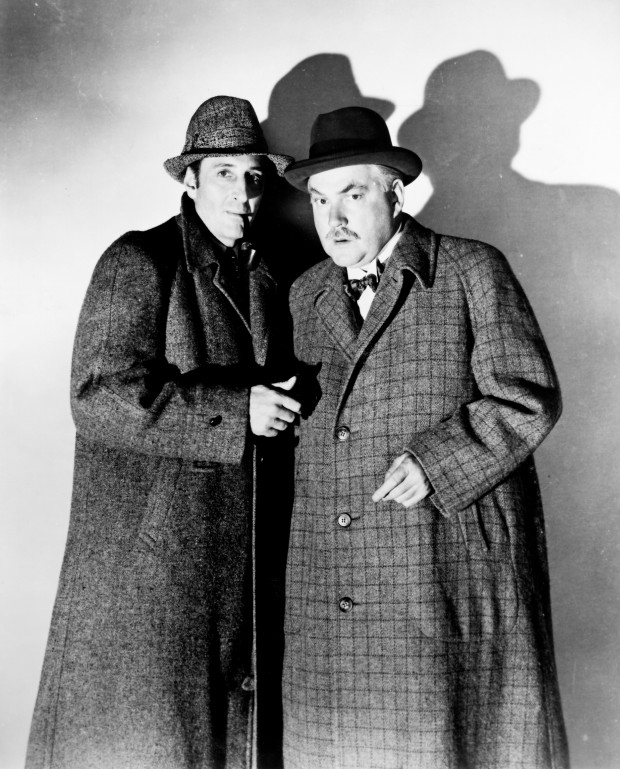 Basil Rathbone was born in 1892—and I’ll come clean right from the get-go: I am a tremendous fan of the actor’s work.  Basil possessed a suavity and menace that made him one of the cinema’s best villains; even when he was engaging in stovepipe-hat-and-twirly-moustache antics he had an undeniable élan and panache that you couldn’t help but admire.  Rathbone played scores of bad guys in movies…yet his best-remembered cinematic role was that of a hero, Arthur Conan Doyle’s immortal detective Sherlock Holmes.

He was born Philip St. John Basil Rathbone in Johannesburg to British parents…yet his stay in the South African Republic was a brief one.  Rathbone was three years old when the family was forced to flee to Britain, his father Edgar having been accused by the Boers of being a spy.  Educated at the Repton School in Derbyshire between 1906 and 1910, Basil acquiesced to Edgar’s request that he pursue a “conventional” career by briefly working for the Liverpool and Globe Insurance Companies.  However, the footlights proved to be too strong a temptation to resist, and the aspiring young thespian gravitated toward the stage—making his theatrical debut with a small role in a 1911 production of The Taming of the Shrew.  This would lead to a trip to America a year later, traveling with a repertory company in productions of Romeo and Juliet, The Merry Wives of Windsor, and As You Like It.

Basil Rathbone took a momentary detour from acting when he was called up into the British Army as a private with the London Scottish Regiment.  This same regiment also included (at various times) many of his acting contemporaries, notably Claude Rains, Herbert Marshall, and Ronald Colman.  Returning to the stage in 1919, Basil enjoyed a flourishing career as a Shakespearean performer in both the United Kingdom and the United States…and by 1925, Rathbone had set his sights on a motion picture career.  One of his earliest “talkies” was The Bishop Murder Case (1930), in which he played Philo Vance—the sleuth created by S.S. Van Dine.  Yet Basil would find greater success as a delectable cinematic villain, playing knaves and scoundrels in such films as David Copperfield (1935), Captain Blood (1935), A Tale of Two Cities (1935), The Adventures of Robin Hood (1938—his best-known villainy as Sir Guy of Gisbourne), and The Mark of Zorro (1940).  Rathbone also established earlier horror film bona fides with roles in Tower of London (1939) and Son of Frankenstein (1939).  In addition, his turns as Tybalt in Romeo and Juliet (1936) and King Louis XI in If I Were King (1938) garnered him his two Academy Award acting nominations.

It was his casting as Sherlock Holmes in 20th Century-Fox’s The Hound of the Baskervilles (1939) that would cement Rathbone’s cinematic immortality.  His success in that film (with Nigel Bruce as Dr. Watson) led to a follow-up in The Adventures of Sherlock Holmes that same year, and in 1942 a series of Holmes films was cranked out by Universal (twelve of those in all).  The Fox films led to Rathbone and Bruce reprising their parts in a radio series for NBC in the fall of 1939 (keep in mind that the great detective’s “adventures” had been appearing before the microphones since 1930).  Basil would continue in that capacity until 1946, when he announced that he had grown tired of the character (the last of the Universal Holmes pictures, Dressed to Kill, also appeared in that same year).  He returned to Broadway, where his performance as Dr. Austin Sloper in The Heiress would earn him a Tony Award.

As a well-known movie actor, Basil Rathbone didn’t lack for work in radio—making frequent appearances on such anthology shows as The Cavalcade of America, The Gulf/Lady Esther Screen Guild Theatre, The Lux Radio Theatre, The Radio Reader’s Digest, and The Theatre Guild On the Air.  He appeared on the likes of Information Please and Truth or Consequences, and joshed with such radio comedians and personalities as Fred Allen, Jack Benny, Edgar Bergen, Cass Daley, Bob Hope, Danny Kaye, Henry Morgan, and Rudy Vallee.  Basil took a try at a second weekly radio series with Tales of Fatima, a crime drama (sponsored by the cigarette) that premiered over CBS on January 8, 1949.  Despite its attempts at novelty—Rathbone played himself, as an actor who frequently found himself caught up in investigations of murder—the series wasn’t successful, and left the airwaves on October 1st of that same year.

By the 1950s, Rathbone found that he was able to use his reputation for villainy to comic effect in such silver screen efforts as Casanova’s Big Night (1954), We’re No Angels (1955), and the delightful Danny Kaye vehicle The Court Jester (1956).  Basil was actually asked to hold back during the climactic swordfight in that film (Rathbone was a first-class fencer, which made it all the more painful when he had to lose to Errol Flynn in the movies they made together—he once joked in later years “I could have killed Errol Flynn any time I wanted to!”) so that Kaye would look better.  Rathbone also had a wonderful showcase in 1958’s The Last Hurrah, and made guest appearances on such TV series as Burke’s Law and Dr. Kildare.  The actor continued making movies throughout the 1960s, collecting a few paychecks from American International Pictures for roles in good movies like Tales of Terror (1962) and The Comedy of Terrors (1964—with co-stars Vincent Price, Peter Lorre and Boris Karloff!)…and questionable efforts like The Ghost in the Invisible Bikini (1966).  (To be fair—there’s a great gag in Bikini where Harvey Lembeck sizes up Basil with “That guy looks like Sherlock Holmes!”)  The movies lost one of their unsurpassed villains when Basil Rathbone passed away in 1967.