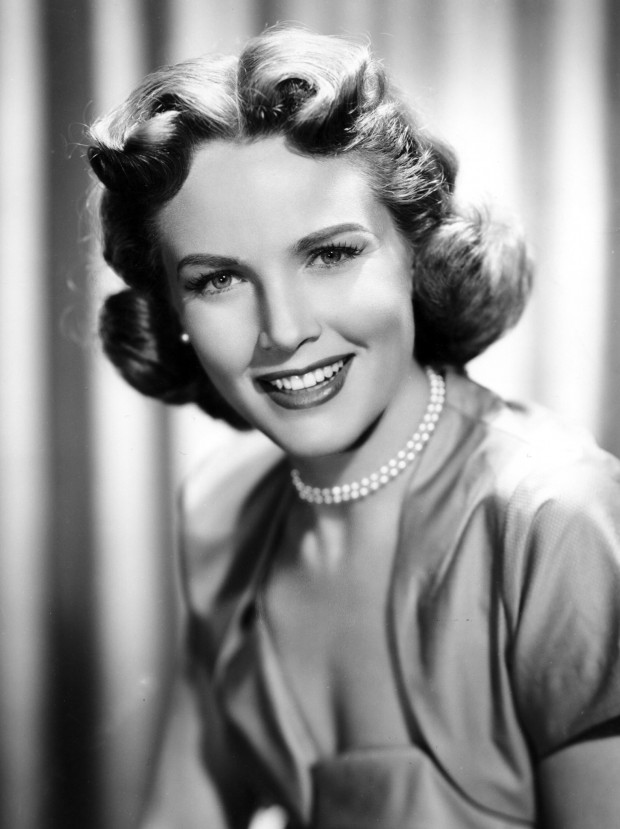 The actress fondly remembered by classic television and old-time radio fans for portraying the female half of the sleuthing couple known as Mr. and Mrs. North was born on this date in Long Beach, California.  Actress Barbara Britton went by Barbara Maureen Brantingham in the early days, attending Polytechnic High School and majoring in speech at Long Beach City College after graduation.  Barbara aspired to become a speech/drama teacher, but became more and more interested in performing…to the point where she left school and began appearing in local stage productions (despite the disapproval of her conservative parents).  Representing Long Beach in a Pasadena Tournament of Roses parade, she was spotted on the front page of a newspaper by a talent agent from Paramount Pictures and signed to a motion picture contract.

In her debut film, a Hopalong Cassidy oater entitled Secrets of the Wasteland (1941), Barbara was billed with her new last name of Britton—Paramount thought “Brantingham” was a little too long for theater marquees.  As a studio ingénue, Britton began to get small roles and bit parts in such films as Louisiana Purchase (1941), The Fleet’s In (1942), Reap the Wild Wind (1942), Wake Island (1942) and So Proudly We Hail! (1943).  Her movie roles, as bright and vivacious as the woman herself, were mostly undistinguished supporting females and second roles, but she did get the opportunity to act alongside stars like Ray Milland (Till We Meet Again), Randolph Scott (Captain Kidd, Gunfighters, Albuquerque), Joel McCrea (The Virginian), Linda Darnell (The Great John L.), Louis Hayward (The Return of Monte Cristo) and Gene Autry (Loaded Pistols).  One of her most memorable turns was as Ronald Colman’s sister in the underrated comedy Champagne for Caesar (1950).

Britton continued her film appearances in the 1950s with vehicles like The Bandit Queen (1950), Bwana Devil (1952) and Ride the Man Down (1952)—her swan song would be 1955’s The Spoilers, opposite Jeff Chandler and Rory Calhoun.  By that point in her career, Barbara was working on stage and in television—and that’s when Mr. and Mrs. North came into view.  Based on the radio program which had premiered over NBC in December of 1942 (which in turn had taken as its source material the series of popular mystery novels written by Francis and Richard Lockridge), Mr. and Mrs. North featured Barbara as Pam North, the wife of publisher Jerry North (Richard Denning), who displayed a knack for solving crimes that for unexplained reasons baffled the police (represented by Lieutenant Bill Weigand, as played by Francis De Sales).  The program was occasionally reminiscent of The Thin Man franchise (though different in that the Norths were strictly crime-fighting amateurs—Nick Charles was a retired detective), and provided a welcome respite from the usual detective dramas that let a lone P.I. do all the work; Pam and Jerry were a team and solved mysteries as a twosome; they would inspire later TV crime dramas such as McMillan and Wife and Hart to Hart.

On radio, Mr. and Mrs. North had moved to CBS in July of 1947 (often advertised as “mystery liberally sprinkled with laughs”) which explains why the TV version was also featured on the Tiffany network, telecast from 1952 to 1954.  But in June of 1953, Barbara and co-star Richard Denning would do double duty as both the radio and TV Norths, taking over for Alice Frost and Joseph Curtin and continuing in the roles over the ether until April of 1955 (the series became a serialized, five-day-a-week program in October of 1954).  Denning was already a radio favorite, having played husband to Lucille Ball on her successful sitcom My Favorite Husband.  Barbara herself had also established a bit of radio cred, with guest appearances on such shows as The Lady Esther Screen Guild Theatre, The Lux Radio Theatre and Family Theatre.

Television’s Mr. and Mrs. North was sponsored by Revlon cosmetics, and the company took advantage of Barbara’s unquestionable loveliness to promote its product both on the series and in live commercials; for twelve years, Britton was the company’s spokeswoman, gracing television ads on such shows as The $64,000 Question (and its sister series, The $64,000 Challenge), Revlon’s Big Party and The Ed Sullivan Show.  Apart from her exposure with Revlon, and an appearance in a sitcom pilot entitled Head of the Family—that couch potatoes worth their salt know was eventually fashioned into The Dick Van Dyke Show—Barbara Britton was content to continue her craft in Broadway productions like Wake Up, Darling, How to Make a Man and Me and Thee.  She had made the decision to focus her efforts on raising a family with her husband, Dr. Eugene Czukor, whom she had met in 1945 while seeking treatment from trauma reportedly suffered during the production of So Proudly We Hail!  In 1979, Barbara briefly returned to TV as Fran Craig Gordon on the daytime drama One Life to Live—sadly, her stint on that series ended with her death from pancreatic cancer on January 17, 1980.