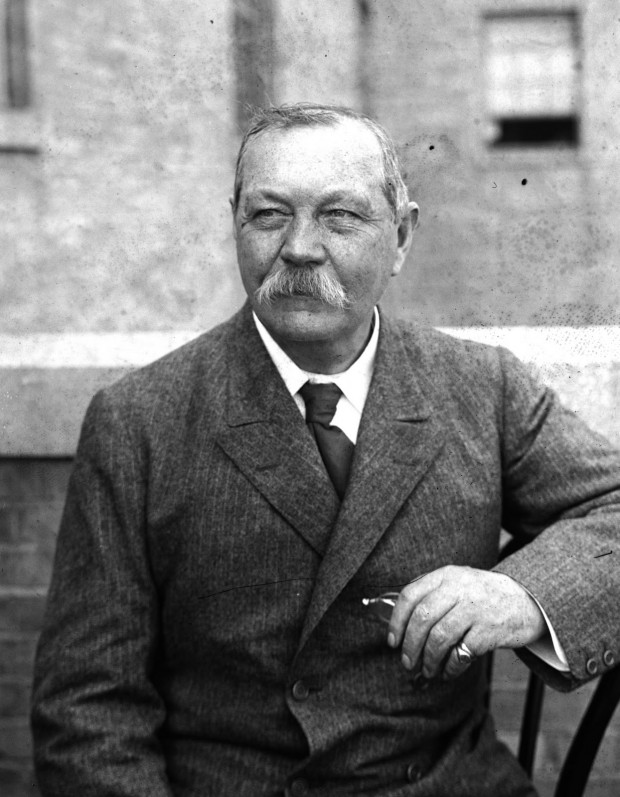 As a medical student at the University of Edinburgh from 1876 through 1881, Arthur Ignatius Conan Doyle—born in Edinburgh on this date in 1859—found himself fascinated by an instructor at that school named Joseph Bell.  An early practitioner of what we would call nowadays forensic pathology, Dr. Bell displayed an unusual talent for being able to examine patients and deduce details about their life and occupation through simple observation.  Doyle later became Bell’s clerk at the Edinburgh Royal Infirmary.

Doyle’s association with Bell would extend beyond medicine: the young doctor, who also wrote short stories during his medical studies, was inspired to create a fictional detective that used the same deductive reasoning practiced by his mentor.  We know this shamus, of course, as Sherlock Holmes—unquestionably the most popular character of the many novels and short stories for which Arthur Conan Doyle was responsible during his lengthy literary career.

Arthur Conan Doyle’s childhood was a troubled one.  His father, Charles Altamont Doyle, battled alcoholism.  For a brief period of time, the Doyle family was scattered throughout Edinburgh as a result of his parents’ temporary separation.  Though the family would reunite three years later, Charles was never able to overcome his struggles with the bottle and he passed away in 1893 after years of illness.  Doyle was fortunate to be supported by several wealthy uncles, who saw to it that he be educated at a number of Jesuit schools between 1868 and 1876.  Catholicism never took hold of young Arthur; he would later become an agnostic and dabbled in spiritual mysticism.

His medical career saw similar troubles.  Doyle established several practices (including serving as a ship’s doctor on two sailing vessels in the 1880s), but spent most of his time writing fiction as he waited for patients—a practice he had instituted during his days in medical school.  His earliest known short story, “The Haunted Grange of Goresthorpe,” was submitted to Blackwood’s Magazine (and was rejected).  His first published work, “The Mystery of Sasassa Valley,” was introduced in the September 6, 1879 issue of Chambers’ Edinburgh Journal.  Doyle then decided to use Dr. Bell’s ingenious methods as inspiration for a detective that he described in his 1924 autobiography as “a scientific detective who solved cases on his own merits and not through the folly of the criminal.”  This sleuth’s first adventure, A Study in Scarlet, was purchased by Ward Lock & Co in November of 1886 for the princely sum of £25 (the equivalent of £2,500 today) and published a year later in Beeton’s Christmas Annual to much critical acclaim.

A sequel to Scarlet was published as The Sign of the Four in Lippincott’s Magazine in February of 1890.  Arthur Conan Doyle quickly grew dissatisfied with Ward Lock & Co (he felt they were exploiting him), and he left them to continue publishing Sherlock Holmes stories in the pages of the Strand magazine.  Holmes would soon make Doyle one of the best-paid authors of his time.  It soon became apparent, however, that the author’s discontent was more with his creation; in an attempt to devote more time to his historical novels, Doyle made the decision to kill off his detective (along with his nemesis, Professor Moriarty) in a December 1893 tale, “The Final Problem.”

To say that the public was indignant would be a severe understatement.  There was a good deal of pressure put on Arthur Conan Doyle to revive the resident of 221-B Baker Street, and Doyle placated his audience by featuring Holmes in his novel The Hound of the Baskervilles, published in 1901 (the events in Baskervilles took place before Sherlock’s plunge over Reichenbach Falls).  This didn’t satisfy his public, and so Doyle wrote “The Adventure of the Empty House” (published in 1903), explaining that while Holmes did survive the fall it was necessary to maintain the illusion that he snuffed it because he had other deadly enemies (notably Colonel Sebastian Moran).  Arthur Conan Doyle continued to create the adventures of what many believe to be the world’s greatest detective until 1927, with a total of fifty-six short stories and four novels.  (After his death in 1930, other authors took up the slack by featuring Holmes in their works.)

Sherlock Holmes was Doyle’s most popular literary creation, but to only credit the author with Holmes does him a tremendous disservice.  Many critics believe that the seven historical novels that he wrote between 1888 and 1906 constitute his best work, and Doyle also brought to life such characters as Professor Challenger (featured prominently in The Lost World, perhaps his best-known non-Holmes work) and Brigadier Gerard.  In addition to short stories and novels, Doyle also penned poetry, non-fiction, and works on spiritualism.  He even dabbled in stage plays, including the 1899 production of Sherlock Holmes (co-written with William Gillette).  (Of course, a number of his tales were adapted for the silver and small screens as well.)

Sir Arthur Conan Doyle led a life that included forays into sport (as a footballer), spiritualism, politics…and even imitating his famous creation when it came to crime detection. (Doyle took on two “closed” cases in 1906 and 1908 that resulted in the exoneration of two men convicted of crimes that they did not commit).