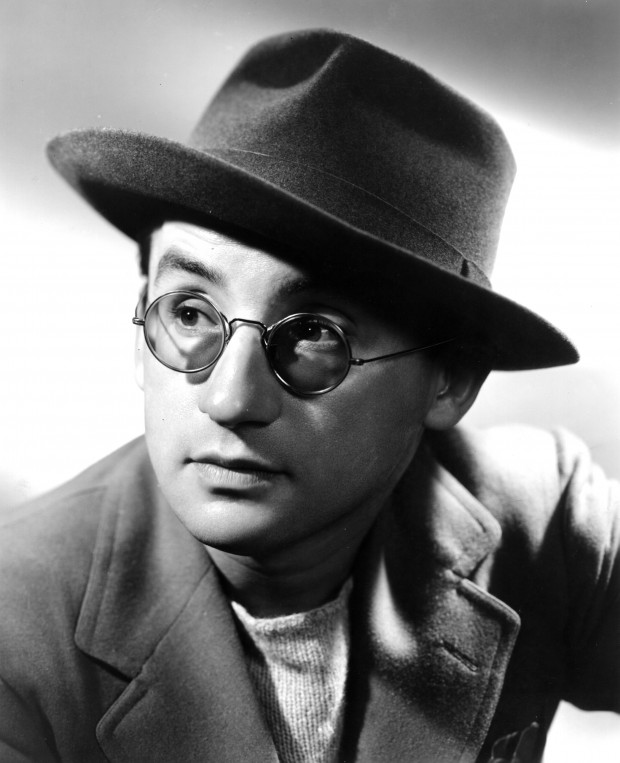 In listening to a local public radio station while attending college at Huntington, West Virginia’s Marshall University, I happened upon a dramatic excerpt in which two men encounter a mysterious fog…that turns people inside out!  At the conclusion, the program’s host interviewed Arch Oboler, the playwright and novelist, who went on to talk about his theories about horror in general…and radio horror in particular.  (This exposure to Oboler was supplemented by a segment that I later learned was called “A Day at the Dentist’s”—both it and the fog piece [“The Dark”] were culled from an LP that Oboler had produced for Capitol Records in 1962: Drop Dead! An Exercise in Horror.)

Oboler, who was not only a respected name in radio, but also dabbled in films, TV and theater, was born in Chicago, Illinois on this date in 1909.  Infused with a literary spark practically from day one, he was a voracious reader and even sold his first short story when he was but ten years old.  He was accepted into the University of Chicago upon graduating from high school…but his collegiate career was a short one.  The school expelled him because of his confrontational nature, something that would both help and hinder him in his future career endeavors.

Oboler then went into writing pulp fiction full-time, but in 1933 he wrote his first radio play.  The National Broadcasting Company bought that script, presenting it as part of a program honoring the network’s new headquarters at Radio City in New York.  Disgusted that the content of the radio medium seemed to consist of nothing but soap operas, Oboler’s “Futuristics” was a satirical science-fiction drama that examined the past through the eyes of the citizens of the future.  (“Futuristics” was a huge success, but it foretold of the future clashes Oboler would experience with sponsors—the American Tobacco Company wasn’t happy about one of the characters poking fun at their slogan in Arch’s play.)

In a wry definition of irony, Oboler’s hiring by NBC meant turning in scripts for soap opera-style shows like Grand Hotel and Dear John (aka The Irene Rich Show).  But, Arch moved up in the network ranks by 1936, when a short playlet that he wrote (“Rich Kid”) was used by Rudy Vallee on the entertainer’s The Royal Gelatin Hour.  Vallee asked Oboler to continue contributing dramatic sketches to the program, and Arch landed stints on The Magic Key of RCA and, beginning in May of 1937, The Chase and Sanborn Hour.  Oboler’s career caught fire in 1936 when he replaced Wyllis Cooper (who had left for Hollywood) as the creative force behind NBC’s late-night horror program Lights Out.  Arch wasn’t particularly wild about the horror genre, but he saw that doing the show (which aired in a late night time slot) would allow him greater autonomy and freedom from sponsor interference.  At the risk of making a bad pun: he should have lived so long.  Oboler’s first script for the series, “Burial Services,” told a chilling tale of a little paralyzed girl who had been buried alive…and was not going to be rescued.  NBC received a blanket snowfall of complaint letters (around 50,000) about the production…and though Oboler agreed to tone down some of Lights Out’s material in the future, his penchant for controversy was just beginning.

Oboler wrote an “Adam and Eve” sketch during his stint on The Chase and Sanborn Hour that featured show regular Don Ameche and guest star Mae West in the title roles…and though it seems rather tame listening to it today, West’s delivery of some of the lines (and a comedy bit that followed in which she interacted with Edgar Bergen & Charlie McCarthy) enraged listeners and high-minded civic types to the point where NBC not only banned West from any future network appearances…the very mention of her name was verboten for fifteen years after that.  By 1938, having contributed such memorable plays as “Cat Wife,” “Chicken Heart,” and “Revolt of the Worms” to Lights Out, Oboler decided that none of his fictional terrors could match the real horror that was Adolf Hitler, and he left the program to concentrate on his Arch Oboler’s Plays series that began the following year in 1939.  (A sustained series, Plays later acquired a sponsor in Procter & Gamble; it was then re-titled Everyman’s Theater and lasted until 1941.)

Throughout the 1940s, Oboler concentrated on writing plays dedicated to publicizing the war effort, which were featured in such shows as Plays for Americans, To the President, Free World Theatre and Everything for the Boys.  But because propaganda doesn’t necessarily guarantee groceries on the table, Arch also agreed to revive Lights Out in 1942 for CBS in a half-hour series sponsored by Ironized Yeast.  It is this series from which most of the surviving episodes of the famed horror program are listened to today.  Many of them were revised versions of scripts from the 1930s, and included such Oboler classics as “Poltergeist” and “Oxychloride X.”  It was also at this time that Oboler tried his luck at a Hollywood screenwriting career, penning the screenplays for such films as Escape (1940) and Gangway for Tomorrow (1943), and became an auteur (writer-director-producer) with productions like Strange Holiday (1945) and cult classes like Five (1951), The Twonky (1953) and the first 3-D film, Bwana Devil (1952).

Arch later dipped a big toe in television (the 1949 anthology series Oboler’s Comedy Theatre) and on Broadway (Night of the Auk, based on his radio play “Rocket from Manhattan”).  He even continued writing short stories and novels—his 1969 fantasy House on Fire was adapted as a production on the Mutual Radio Theater in 1980.  But even after tasting success in other fields, Oboler’s true love was radio, and he contributed several more scripts to Mutual Radio Theater, including “Lion Hunt”.  A man who had almost as many detractors as admirers, Arch Oboler is nevertheless one of the most important names in the history of the medium.