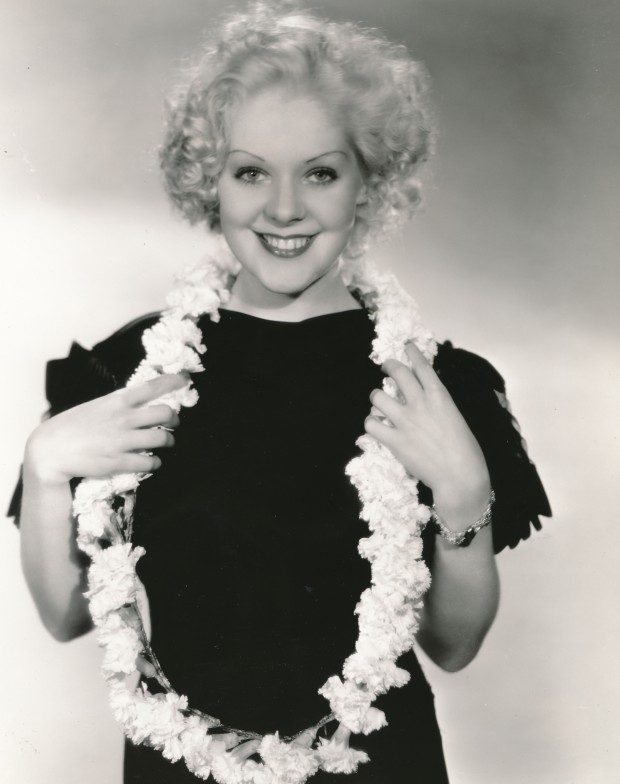 During the 1930s and early 1940s, actress-singer Alice Faye—born in New York City in 1915—was one of 20th Century-Fox’s most bankable attractions, starring in such box office vehicles as Alexander’s Ragtime Band (1938) and That Night in Rio (1941).  By 1945, however, Alice earned the distinction of being one of the few silver screen stars to abandon stardom at the peak of her career…choosing instead to focus on being both wife to husband Phil Harris and mother to their two daughters, Phyllis and Alice.  Since performing is not always easy to walk away from, Faye found fulfillment in appearing alongside Phil in one of radio’s funniest situation comedies: The Phil Harris-Alice Faye Show.

Born Alice Jeane Lippert, Alice Faye had acquired her new show business moniker by the time she became a performer on Rudy Vallee’s popular radio program The Fleischmann’s Yeast Hour.  Faye was no neophyte; she had started out as a chorus girl in vaudeville before moving on to Broadway (where she had a prominent role in the 1931 version of George White’s Scandals).  But it was Vallee’s program that really shot her to prominence, and Rudy and White can also take small credit for Alice’s burgeoning movie career.  Hired to perform a musical number with Rudy in the film version of George White’s Scandals (1935), Alice found herself cast as the movie’s female lead after Lillian Harvey abandoned the role.

In addition, Alice Faye obtained a career boost from Fox production head Darryl F. Zanuck, who took her on as his protégé and made sure that she was featured in many of the studio’s musicals such as On the Avenue (1937) and You Can’t Have Everything (1937).  (Faye even starred alongside Fox’s bread-and-butter Shirley Temple in two of her most memorable vehicles, Stowaway [1936] and Poor Little Rich Girl [1936].)  Alice’s breakout film was In Old Chicago (1937), in which she co-starred with two of Fox’s dependable leading men, Tyrone Power and Don Ameche.  Both actors were reunited with Faye in Alexander’s Ragtime Band, and Ty was Alice’s leading man in Rose of Washington Square (1939)—a film that so resembled the story of the legendary Fanny Brice that “Baby Snooks” later took the studio to court.

Don had appeared alongside Alice in You Can’t Have Everything, and would be pressed into service as a leading man in three more pictures including Hollywood Cavalcade (1939) and Lillian Russell (1940).  This latter feature would be cited by Faye as her personal favorite, and when she finished production on Week-End in Havana (1941)—one of three films she made with Carmen Miranda—Alice took some well-deserved time off for maternity leave.

Alice Faye married Phil Harris—best known as Jack Benny’s playboy bandleader on Benny’s successful radio program—in 1941.  It was not Alice’s first trip down the matrimonial aisle (she was married to vocalist Tony Martin from 1937 to 1940), but the union with Harris was a solid one…even to the point of providing comic fodder for the Benny show, where Phil was often ribbed about being married to a wealthy movie star.  But Faye’s career would soon change direction.  After successes in Hello Frisco, Hello (1943—the film that produced Alice’s signature song, “You’ll Never Know”) and The Gang’s All Here (1943), the actress hit a speed bump with her role in 1945’s Fallen Angel.  She had started out as the star of that picture, but her mentor Zanuck had found a new shiny object to focus on in Linda Darnell.  Much of Alice’s Angel footage wound up on the cutting room floor in favor of emphasizing Darnell’s role, and Faye decided to call it quits after screening the final product.

Enter F.W. Fitch.  The president of the Fitch Shampoo company had been quite impressed with the success of Ozzie and Harriet Nelson’s radio sitcom, and felt that it could be duplicated with a weekly half-hour featuring Alice and Phil.  After a promising audition recorded on July 10, 1946, the Harrises became the new stars of The Fitch Bandwagon in the fall of that same year.  Phil had already established his radio chops as a regular on The Jack Benny Program, but Alice was no slouch when it came to performing before a microphone either.  She’d made frequent appearances on Rudy Vallee’s program, and her radio resume also included Command Performance, Good News of 1939/1940, The Gulf/Lady Esther Screen Guild Theatre, The Lux Radio Theatre, Music from Hollywood, Request Performance, and Texaco Town (Eddie Cantor’s show, on which her then-husband Tony Martin was a regular).

For years, The Fitch Bandwagon benefited from its plum time slot: right between the Jack Benny and Edgar Bergen-Charlie McCarthy programs.  That insured that Alice and Phil’s Fitch broadcasts would do well in the ratings…but even then, it took a little time for the Harris’ show to find its comedic footing.  It all came together in the second season, when writers Ray Singer and Dick Chevillat began to suffuse the program’s scripts with a wisecracking, sarcastic sensibility that makes the show such a joy to listen to today.  Phil’s character was more or less an extension of the character he played on the Benny program (though they toned down the drinking aspects of the character for the benefit of the family audience): an illiterate stumblebum who, with the help of his friend (and band member) Frankie Remley (Elliott Lewis), managed to turn simple situations into hilarious chaos by the end of the half-hour.  Phil and Frankie would be frequently confronted by Harris’ nemesis, a smart-alecky delivery boy who answered to “Julius Abruzzio” (played by professional radio brat Walter Tetley).

Critics have opined that the Phil-Frankie-Julius shenanigans often overshadowed Alice’s participation on the program, relegating her to the status of a fourth wheel.  But this does “Miss Faye” a tremendous disservice. Alice not only demonstrated first-rate comic timing (not to mention a talent for dialects, often adopting a gum chewing “moll” accent), but wowed audiences with her vocal gifts and her warm-hearted demeanor (which kept the program from getting too snarky).  One of the show’s funniest running gags centered on Phil’s status as a “kept” husband; he once boasted to boss Jack Benny—who was making a guest appearance—that Alice “has money we haven’t even counted yet!”

In the fall of 1948, the Harrises obtained a new sponsor in Rexall and the series changed its name to The Phil Harris-Alice Faye Show.  While the couple had been enjoying good numbers as far as ratings went, their place in the Hoopers was threatened when they lost their valuable lead-in with the migration of Jack Benny to rival CBS in January of 1949.  Unbowed, The Phil Harris-Alice Faye Show continued on NBC (getting another sponsor in 1950 in the form of RCA Victor) until 1954, proud that it was one of the last sitcoms to continue on radio at that time.

Radio was quite good to Alice Faye; it allowed her the freedom she wanted to look after her family once she quit motion pictures in 1945…because all she was really required to do was show up for a rehearsal read-through and then for the live broadcast (and like many shows, Phil and Alice’s series was eventually transcribed for later broadcast).  Alice was actually keen to bring their sitcom to the small screen like so many other radio programs, but Phil nixed that idea.  So she settled for sporadic TV appearances on shows like All Star Revue and This is Your Life (where Ralph Edwards feted her famous husband).

In 1962, Alice attempted a “comeback” with a role in a remake of State Fair, a 20th Century-Fox film that had previously been tackled in 1933 (with Will Rogers) and 1945.  Despite good reviews for her efforts, the 1962 State Fair was, as Johnny Carson might have said, a “Bomb-o”…and after that, her movie appearances were limited to small parts in films like Won Ton Ton, the Dog Who Saved Hollywood (1976) and her swan song, The Magic of Lassie (1978).  She spent the remainder of her life as a frequent interviewee in documentaries on former co-stars Shirley Temple and Carmen Miranda before succumbing to stomach cancer in 1998.