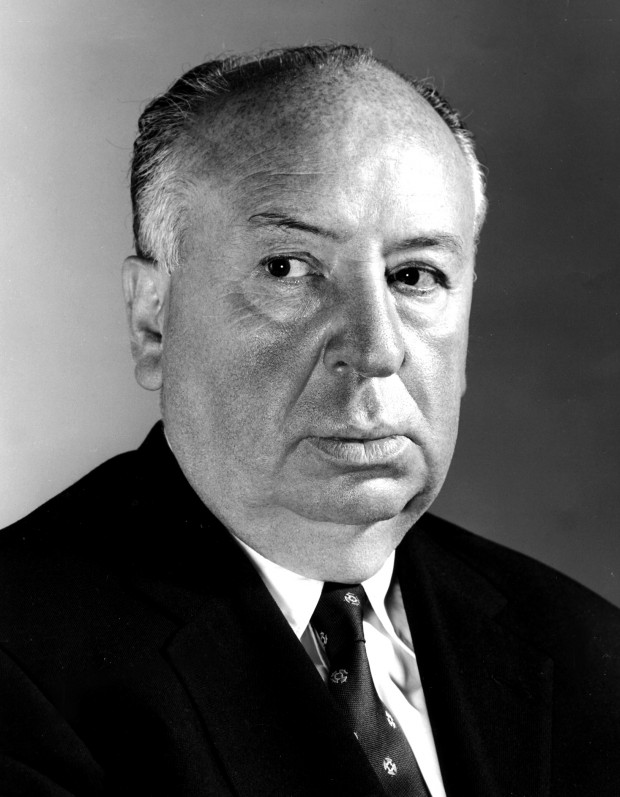 Sir Alfred Joseph Hitchcock was born in Leytonstone—part of Essex at the time of his birth, now part of London.  The youngest of three children of greengrocer William Hitchcock and his wife Emma Jane, Alfred would grow up to become one of the most successful filmmakers in the cinema…as well as one of the most recognizable.  Hitch had the same wonderful gift for self-promotion shared by Walt Disney: it started when Sir Alfred began making brief cameos in the pictures he directed (what he liked to call “his signature”) and later blossomed into television (the series he hosted, Alfred Hitchcock Presents and The Alfred Hitchcock Hour, would be staples on the CBS and NBC networks from 1955 to 1965), magazines (his name and likeness was licensed for Alfred Hitchcock’s Mystery Magazine) and books (in addition to anthologies featuring his name, he was also a character in the published series Alfred Hitchcock and the Three Investigators).

After attending both Jesuit and Catholic schools in his youth, Hitchcock attended an engineering school in London.  Upon graduation, he worked for a cable company as a draftsman and advertising designer.  He found a creative outlet in writing short stories—and that, coupled with an interest in photography, led him to seek work as a title designer for the London branch of what was Paramount Pictures.  In 1920, he landed a full-time position in that field at Islington Studios—owned by Famous Players-Lasky and eventually taken over by Gainsborough Pictures.

Described by producer Michael Balcon as a “plump, young technician whom I promoted from department to department,” Alfred began to move up through the ranks in the British motion picture industry: he worked on several films as an art designer and second unit director (or assistant director)—and even got the opportunity to direct his own film in 1922, a movie with the unfortunate title of Number 13.  (The funding for the film did not come through, and the production was eventually cancelled.)  He directed a 1922 short entitled Always Tell Your Wife without credit, but finally saw his name onscreen three years later with The Pleasure Garden (1925).  With his third effort, The Lodger: A Story of the London Fog (1926), he began to attract the notice and acclaim of film critics.  (The Lodger also played an important role in Hitch’s radio career—which I’ll get to in a bit.)

Hitchcock continued to work at his craft, creating early classic films such as Blackmail (1929), The Man Who Knew Too Much (1934), The 39 Steps (1935) and The Lady Vanishes (1938).  It was the latter title that attracted the attention of Hollywood.  He was signed by producer David O. Selznick to a contract in March of 1939, and his first film for Selznick wound up winning the Best Picture Oscar: Rebecca (1940).  Sir Alfred helmed a string of successful suspense thrillers throughout the rest of the decade: Suspicion (1941), Shadow of a Doubt (1943), Notorious (1946) and Rope (1948), to name just a few of the many.

His 1940 production of Foreign Correspondent provided the impetus for his participation on a July 22, 1940 broadcast of the CBS radio series Forecast (the audition for radio’s Suspense).  Hitchcock promoted the upcoming film by casting two of the principal actors from that film—Herbert Marshall and Edmund Gwenn—in an on-air dramatization of The Lodger…the movie that had made his British reputation.  Audiences also heard “Hitch” on the program—though it was actually an impersonation by actor Joseph Kearns.  But, it would be the first of several Hitchcock films to be dramatized on radio; the director’s work could be heard on such series as The Lux Radio Theatre and Screen Director’s Playhouse, and Sir Alfred himself guested on the likes of Information Please and The Edgar Bergen-Charlie McCarthy Show.  Hitch even acted as host of an audition show entitled Once upon a Midnight in 1945: it wasn’t picked up as a series, but listening to the surviving broadcast one can’t help but detect a future blueprint in the later success of Alfred Hitchcock Presents.

Hitch continued to achieve movie successes in the 1950s—a period that many consider to feature some of his best work behind the camera.  Classics like Strangers on a Train (1951), Rear Window (1954), Vertigo (1958) and North by Northwest (1959) entertained audiences and cemented his reputation as “the Master of Suspense.”  He built on that reputation in the 1960s with two of his most popular films, Psycho (1960) and The Birds (1963), and in the 1970s could still wow moviegoers with entries like Frenzy (1972).  His final film was Family Plot in 1976; another project, The Long Night, was ultimately shelved due to his failing health, and he left this world for a better one on April 29, 1980.

His very name—Hitchcock—has become a shortcut to denote cinematic thrills and suspense (the adjective “Hitchcockian” springs to mind) and during his time on this planet, Sir Alfred left classic film fans with a rich legacy of movies, and a TV series that continues to entertain viewers in reruns today.