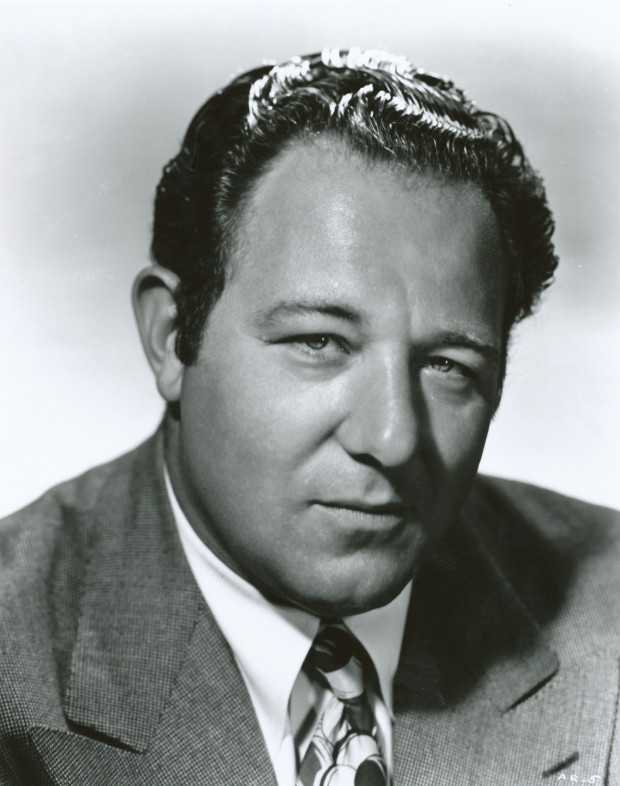 Whether you know him as Teddy Bergman (his birth name) or Alan Reed—an identity he adopted to separate his comedic roles from the dramatic ones (as well as downplay his Jewish heritage)—you certainly know his voice as the head of television’s first prime-time animated sitcom: Fred Flintstone of The Flintstones.  The career of this remarkable performer—born one hundred and six years ago on this date—is “a page right out of history.”

Herbert Theodore “Teddy” Bergman had dreams of being an actor ever since playing The Merchant of Venice’s Shylock as a schoolboy…and despite objections from his prominent family, his interest in journalism (he majored in the subject while attending Columbia University) gave way to a flair for the buskin as he found work with various vaudeville and theatrical stock companies.  Reed was fortunate to get into radio in its infancy in 1926; he appeared as both announcer and actor on such early programs as The Eveready Hour, The Collier Hour and True Detective Mysteries.  By the 1930s, Alan (as Teddy Bergman) was already an established performer in the medium, often starring in his own comedy shows (Henry and George, Joe Palooka) as well as soap operas (Big Sister, Myrt and Marge) and crime dramas (he was one of the first actors to play the talkative cabbie Moe “Shreevy” Shrevnitz on The Shadow).  One of his most famous roles at that time was providing the speaking voice of David Rubinoff, the violinist on The Eddie Cantor Program.  Rubinoff suffered from mike fright, so Reed imitated the man in his best Russian dialect, frequently referring to the star as “Eddie Camphor.”

The 1940s would feature Alan at the height of his character actor fame on radio.  He was Solomon Levy on Abie’s Irish Rose, as well as Officer Clancy on Duffy’s Tavern, Carl Stevenson on The Life of Riley and Milton J. Clyde on My Friend Irma.  Other series on which Reed emoted include The Adventures of Ellery Queen, The Adventures of Philip Marlowe, The Adventures of Sam Spade, The Damon Runyon Theatre, December Bride, Escape, The Halls of Ivy, The Jimmy Durante Show, The Magnificent Montague, Richard Diamond, Private Detective and The Six Shooter, to name just a few of the many.

There were two programs on which the actor appeared that remain most prominent for old-time radio fans.  Alan was Falstaff Openshaw, the hammy poet who was one of the denizens of “Allen’s Alley” during the early years of Fred Allen’s program in the 1940s.  (Reed had played utility parts on Fred’s show since the 1930s.)  With his introduction every week, Falstaff would rattle off titles of various poems for which he was responsible—classics like “Make For the Roundhouse, Nellie—The Brakeman Can’t Corner You There” and “She Was a Girl Just Down from Vancouver, He Was a Sailor Bent on Maneuver.”  After being shouted down by Allen, the comedian would ask Falstaff if he had written a poem for tonight’s program, whereupon the poet would reply: “Indubitably.”  When Reed left the show in the mid-1940s, the comedian gave him carte blanche to play Falstaff in other venues; Reed later revived the character on a short-lived children’s program, Falstaff’s Fables, which also featured his son, Alan, Jr.

Alan Reed’s standout radio role is inarguably Pasquale, the conniving Italian restaurant owner who acted as patron to “the little immigrant” known as Luigi Basco (J. Carrol Naish) on the sitcom Life with Luigi.  Basco, whose antique shop space was rented from Pasquale, had been able to come to the U.S. thanks to the generosity of his friend (who had paid for his passage)…but Pasquale had an ulterior motive.  What he really wanted was for Luigi to marry his daughter Rosa (a squeaky-voiced, 300-pound behemoth played by Jody Gilbert, possessor of radio’s most memorable belly laugh) and take her off his hands.  Pasquale—charitably described by more than one radio historian as an Italian version of Amos ‘n’ Andy’s Kingfish—would often greet Luigi with “’Allo, Luigi, my fren…’allo…’allo…” and when Luigi had been beaten down by the events that had befallen him in that week’s episode, Pasquale had the solution: “Just so happen I’m-a bring-a my little baby with-a me…I’m-a gonna call her over…oh, Roooooosa…Roooooosa…ROSA!!!”  When the show made its brief transition to TV in 1952, both Naish and Reed (as well as a few other actors from the radio version) reprised their roles; the sitcom may not hold up too well today (due to its Italian stereotypes), but it was always a joy to see the master dialecticians at work.

In the 1940s, Alan Reed cut back on some of his radio commitments to try his luck on stage (he appeared with Alfred Lunt and Lynn Fontaine in a production of The Pirate) and in feature films.  He had much success with the latter, with classic favorites such as The Postman Always Rings Twice (1946), Viva Zapata (1952—as Pancho Villa!) and The Desperate Hours (1955) on his resume.  His appearance on the TV version of Life with Luigi also led to other small screen gigs—he appeared with his old boss Ed Gardner on a syndicated version of Duffy’s Tavern in 1954 (humorously, Alan played Clifton Finnegan and not Clancy), and made regular appearances on such series as Mr. Adams and Eve, Peter Loves Mary and Mickey.

It was voicing Fred Flintstone on The Flintstones—a cartoon version of The Honeymooners created by animation giants Bill Hanna and Joe Barbera—that would bring Alan Reed his ultimate fame.  He was fortunate to work with a cast of old radio pros—Mel Blanc (Reed had been a regular on Mel’s 1946-47 radio series), Jean Vander Pyl and Bea Benaderet.  To promote the show, the actor would often make personal appearances clad in Fred’s caveman clothing.  While Fred Flintstone was his bread-and-butter at Hanna-Barbera, Alan also found time to supply the voices of Dum-Dum, the sheepdog sidekick to Touché Turtle (voiced by OTR vet Bill Thompson) and “Mad Dog” Mahoney on Where’s Huddles?  With his death in 1977, Hanna-Barbera was forced to replace Reed with another actor (Henry Corden) as Fred Flintstone…but those of us who grew up with the original could definitely tell the difference.