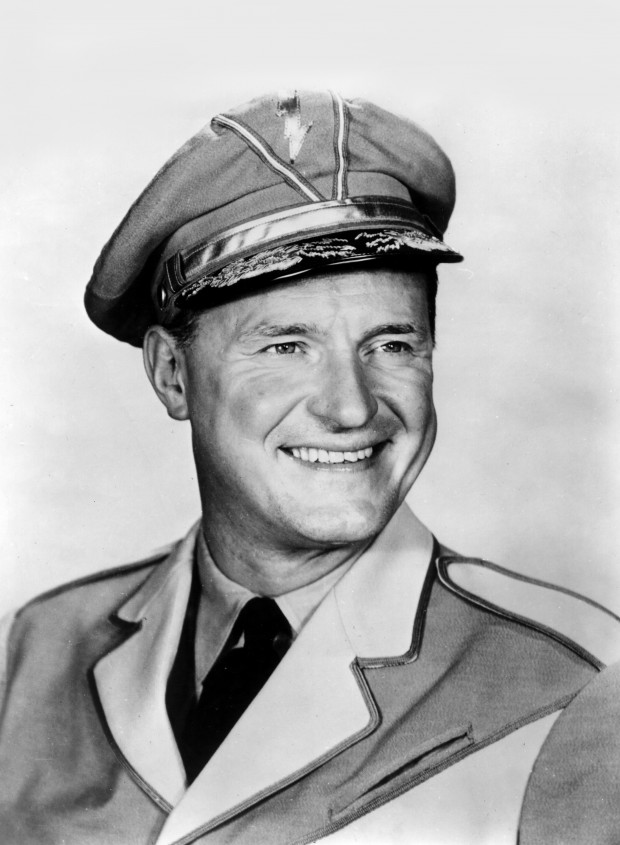 The Ravenna, Ohio native born on this date in 1912 had no way of knowing he would take on two acting jobs that would make him a hero to millions of kids glued to both radio and early TV screens.  But, that’s exactly what happened to Albert E. “Al” Hodge when he took a job with the legendary WXYZ in Detroit in the 1930s…and later became one of the early stars on the fledgling DuMont Television network (known by many today as “the forgotten network”).

While attending Ravenna High School in his teen years, Al Hodge—known to his friends as “Abie”—made both sports and acting his main extracurricular activities…and he was so fond of the latter that he majored in drama at Miami University in Oxford, Ohio, graduating in 1934.  Hodge toured a while with a traveling company of actors known as The Casford Players before landing a position at Detroit’s WXYZ.  Al did everything from write editorials and ad copy, to announce football games and spin records as a disc jockey.  He also wrote and produced for two of the station’s popular dramatic series: The Lone Ranger and Challenge of the Yukon.

Al went on to become the first actor to voice WXYZ’s The Green Hornet, which premiered over the airwaves on January 31, 1936.  Created as a companion piece to the station’s mega-hit The Lone Ranger, The Green Hornet told the tale of newspaper publisher-playboy Britt Reid, who donned a mask and disguise to take on underworld types that operated beyond the reach of the authorities in his fair city.  Like his distant Western relation—and audiences would soon learn with the passage of several years just how distant—the Hornet worked outside the law in order to assist the police…yet often found himself accused of being an outlaw himself.  The Hornet had a sidekick (just as the Lone Ranger had Tonto) in his faithful valet Kato—but eschewed the great horse Silver ridden by ol’ LR in favor of a suped-up automobile called The Black Beauty.

Hodge became so identified as the voice of the Hornet that when Trendle made a deal with Universal Pictures to bring his hero to the silver screen in the form of a serial, Al dubbed in the lines spoken by the Hornet so audiences would feel reassured by the familiar voice.  Hodge played the Hornet until 1944, when he left the program to serve a stretch in the U.S. Navy during World War II.  During his hitch in the service, he was bedridden for nearly a year with a case of pleurisy.

Hodge continued to work a number of radio jobs after leaving the Navy—he turned up in guest roles on series like Nick Carter, Master Detective and Gangbusters, as well as The Radio Reader’s Digest, Crime Club, Boston Blackie and Young Widder Brown.  But, Al got the opportunity to break into the medium of television when Richard Coogan left the kiddie science-fiction show Captain Video and Video Rangers seventeen months after it went on the air for DuMont in June of 1949.  It would be Hodge who was best remembered as the Captain, the hero of millions of viewers who tuned in five days a week (and occasionally six, when a companion series entitled The Secret Files of Captain Video began on Saturdays from September 1953 to May 1954, alternating with Tom Corbett, Space Cadet) to see him defeat such opponents as the diabolical Dr. Pauli (Hal Conklin)…who dressed like a movie gangster and spoke in an accent more befitting of a Nazi or Soviet spy.  Captain Video also had a sidekick known only as The Video Ranger (any relation to the Lone Ranger is pure speculation), who was played throughout the series’ run by Don Hastings, brother of Bob (a.k.a. radio’s Archie Andrews).

The DuMont network folded in 1955, and Al Hodge soon found work (still as Captain Video) appearing on Wonderama, a local New York children’s show (on WABD) from 1955 to 1956, and Captain Video and His Cartoon Rangers (also strictly a NYC show, in which the hero of children everywhere unspooled Superman and Betty Boop cartoons until 1957).  He later hosted The Super Serial Show (a.k.a. Serial Theater) on station WNTA in Newark in 1959, and emceed The Space Explorer’s Club on WOR-TV in 1961.  (The producers of this show gave him a break and allowed him to host the show as Al Hodge instead of Captain Video.)  Due to his typecasting (everywhere he went people greeted him as “Captain Video”), Al worried about his ability to continue to find acting work.  Although, he did land occasional roles on series like Naked City and M Squad, and appeared in Lover Come Back (1961) and The Outsider (1961).

By the late 1960s and early 1970s, opportunities for acting jobs had completely dried up, and Al was forced to take menial, low-paying jobs (he worked as a security guard at one time).  He spent his remaining years living at the George Washington Hotel in New York City, where he passed away in 1979.  Sadly, Hodge didn’t have a nickel to his name.

The unhappy ending of Al Hodge’s personal story does not negate the hours of joy that he brought to young people as both TV’s Captain Video and radio’s The Green Hornet.