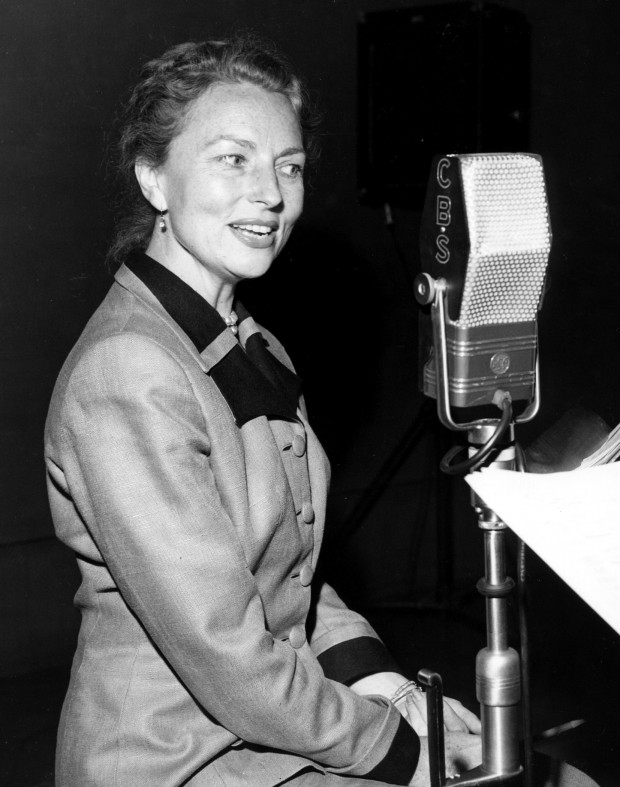 In my days of higher education—where it was joked that I had spent so much time in college, ivy had started to grow up my leg—I was a member of Armstrong State College’s quiz bowl team.  I vividly remember my first tournament, in which we squared off against a most formidable squad from Georgia Tech; their team had a reputation for being able to “buzz in” with the answer to questions merely after hearing the first five words.  But one of the questions in the round began: “She played Orson Welles’ mother in Citizen Kane…”  I hit the buzzer lickety-split and blurted out “Agnes Moorehead” when the moderator called my name.  It goes without saying, of course, that our team was no match for Georgia Tech (our captain noted with a perfectly straight face that one of Tech’s members had never even watched television)—yet knowing that small bit of trivia about the actress born in 1900 on this date in Clinton, Massachusetts gave me a brief moment of self-satisfaction (and a reputation in tournaments to follow as a “trash” expert—”trash” being the nickname college bowl veterans gave to pop culture questions).

Agnes Robertson Moorehead was the daughter of a Presbyterian minister (John) and a former singer (Mildred McCauley).  Agnes would make her public debut reciting “The Lord’s Prayer” in her father’s church, while her mother encouraged her theatrical ambitions by allowing her and her sister Peggy plenty of opportunity to indulge their talents for imagination.  The family moved to St. Louis, Missouri while Moorehead was young, and the two Moorehead sisters would often amuse their father with impressions of his parishioners.  Peggy died suddenly at the age of 23, and Agnes rarely spoke of her sister after that tragedy.

While attending high school, Agnes Moorehead became a member of the chorus of the St. Louis Municipal Opera Company (known to locals as “The Muny”). After graduation she had planned to pursue a theatrical career—something her father did not discourage, but he did insist that she get a formal education.  Moorehead would obtain this at New Concord, Ohio’s Muskingum College, graduating with a bachelor’s degree in biology. She taught public school in Soldiers Grove, Wisconsin for five years while earning her masters in English and public speaking at the University of Wisconsin.  Agnes pursued further study at the American Academy of Dramatic Arts (Manhattan), graduating with honors in 1929.

With graduation and the news of her sister’s passing, Agnes Moorehead was ready to look for acting gigs in Manhattan…and although she did find some stage work, it seemed there were far more opportunities for her in radio.  Moorehead began to build a radio resume that included a recurring role on CBS’ comedy-variety series Evening in Paris (as Cousin Anna), stooging for Phil Baker on his popular comedy program, and bringing the comic strip character of “Min Gump” to life on the situation comedy The Gumps.  Agnes also explored her dramatic side on shows like The Adventures of Sherlock Holmes, and fortuitously became a member of Orson Welles’ celebrated Mercury Theatre Players—appearing in his 1937 production of Les Miserables and in roles on The Mercury Theatre on the Air/Campbell Playhouse.  Her contribution to the infamous “The War of the Worlds” broadcast?  She performed a woman’s scream, then helped take frantic telephone calls from listeners for the remainder of the program.  Many of the radio programs that Agnes worked on had a distinct Orson influence; she played “Margo Lane” to his “Lamont Cranston” in the 1937-38 season of The Shadow(and opposite Bill Johnstone for an additional season after that), and had roles on the likes of The Orson Welles Theatre, Hello Americans, Ceiling Unlimited, Radio Almanac, This is My Best, and The Mercury Summer Theatre.

Agnes Moorehead owed her debut in feature films to her chum Mr. Welles with Citizen Kane (1941), as I mentioned in the first paragraph of this essay.  Agnes would also work with Orson in the Welles-directed The Magnificent Ambersons (1942), as well as Journey Into Fear (1943) and Jane Eyre (1944).  Her role as Aunt Fanny in Ambersons (an outstanding and moving performance) would garner Moorehead the first of four Academy Award nominations for Best Supporting Actress; the other films for which she was nominated were Mrs. Parkington (1944), Johnny Belinda (1948), and Hush…Hush, Sweet Charlotte (1965).  Agnes rarely played leads in motion pictures, but her undeniable talent is stamped on many classic movies of the 1940s, including Since You Went Away (1944),Tomorrow, the World! (1944), Our Vines Have Tender Grapes (1945), Dark Passage (1947—a great villainous role), The Woman in White (1948), and Station West (1948).

As Agnes Moorehead wowed movie audiences with a steadily growing body of work, she continued to make waves before a radio microphone. She appeared as housekeeper Marilly on the comedy-drama The Mayor of the Town (which starred Lionel Barrymore), joshed with Jack Carson on his weekly series, played Maggie on Bringing Up Father, and starred in The Amazing Mrs. Danbury (a sitcom that replaced The Marlin Hurt and Beulah Show when its star succumbed to a heart attack).  Many of Moorehead’s most lauded radio turns were on “radio’s outstanding theatre of thrills” (she was the anthology’s most frequently cast actress). She gave bravura performances in classic Suspense broadcasts like “The Diary of Saphronia Winters,” “The Sisters,” “The Yellow Wallpaper,” and “The Trap”…but the best-known of them all was “Sorry, Wrong Number.” Moorehead first performed this Lucille Fletcher-penned classic on May 25, 1943, and would go on to reprise the role an additional seven times (using the same dog-eared, pencil-marked script on each and every occasion).

Other shows on Agnes Moorehead’s radio c.v. include The Adventures of Leonidas Witherall, Betty and Bob, The Cavalcade of America, The Columbia Workshop, Ellery Queen, Everything for the Boys, The Free Company, Great Plays, The Hallmark Hall of Fame, Hallmark Playhouse, Inner Sanctum, The Lady Esther/Camel Screen Guild Theatre, Mystery in the Air, The NBC Radio Theatre, Pulitzer Prize Plays, Radio Guild, The Radio Hall of Fame, Request Performance, Stagestruck, and Way Down East.  Despite her movie fame and later TV notoriety, Agnes never forgot her radio roots. One of her final performances was on a January 26, 1974 broadcast of The CBS Radio Mystery Theatre, “The Ring of Truth.” (Moorehead also appeared on that program’s inaugural January 6, 1974 installment, “The Old Ones are Hard to Kill.”)

Throughout the 1950s, Agnes Moorehead played character parts in a variety of films: Caged (1950—one of my favorites with Aggie as a sympathetic women’s prison warden), Fourteen Hours (1951),Show Boat (1951), Magnificent Obsession (1954), All That Heaven Allows (1955), The Left Hand of God (1955), The Conqueror (1956), and Raintree County (1957), to name just a few.  In addition to her work on the silver screen, she started to appear on TV on many anthology shows and episodic series, like Wagon Train and The Rebel.  With the 1960s, her onscreen appearances started to slow a bit (Pollyanna, How the West Was Won), but she was still a welcome presence in living rooms with guest star gigs on Rawhide, The Rifleman, The Twilight Zone (the classic “The Invaders”), and Burke’s Law.  The fall of 1964 would bring Moorehead her most famous boob tube role of all.

On September 17, 1964, ABC premiered a half-hour situation comedy entitled Bewitched—with the premise that a witch named Samantha (portrayed by Elizabeth Montgomery) has married a mortal, Darrin Stephens (Dick York and later Dick Sargent), much to the disapproval of her mother Endora (Agnes) and the rest of her supernaturally-powered family.  The show became a smash hit for third-place ABC (it was ranked #2 among all TV programs that first season), and Moorehead’s portrayal of the free-spirited Endora (who took perverse delight in using magic on her son-in-law week after week) would garner her six Emmy Award nominations for her supporting work.  (Interestingly, Agnes wouldn’t win an Emmy for any of those nominations—she received her statuette for a guest appearance on an episode of The Wild Wild West.)  Bewitched enjoyed an amazing eight-year-run on the network and continued to thrive in reruns afterward. Before her passing in 1974 at the age of 73, Moorehead continued to do TV (The Virginian, Night Gallery) and movies (a nice contribution as an Aimee Semple McPherson-type evangelist in 1971’s What’s the Matter with Helen?).

In an anecdote that she would later tell on The Dick Cavett Show in 1973, Agnes Moorehead related how she had visited New York City as a teenager on Easter vacation. She said that she had spotted a precocious seven-year-old at the Waldorf Astoria, discussing a concert with his father and two elderly women.  It wasn’t until after the “War of the Worlds” broadcast, when newspapers were writing articles about Orson Welles and included photos of him as a child that she realized he was the lad she had seen at the Waldorf Astoria that day.  (For years afterward, whenever anyone asked how long he had known Moorehead, Welles would jokingly reply: “Ever since I was seven!”)