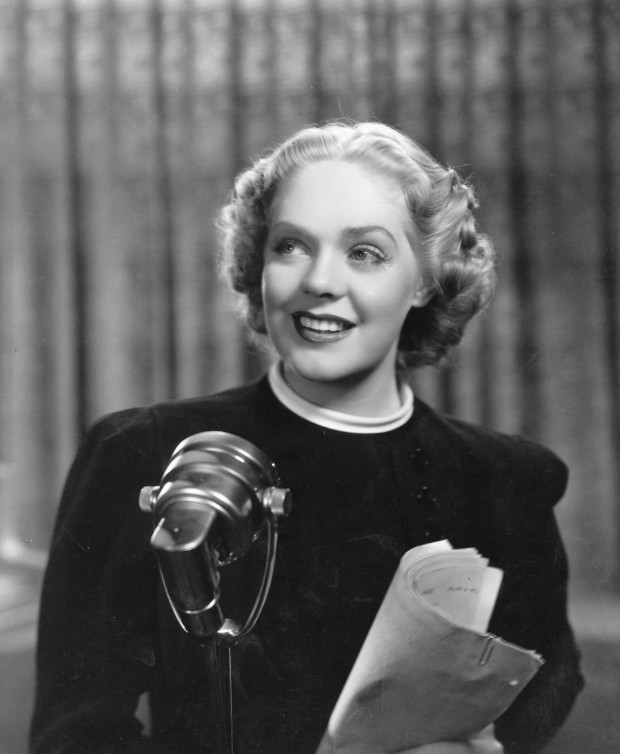 From Chorus To Stardom: The Rise of Alice Faye

It’s one of the most well-worn clichés in show business — the bright young thing in the chorus rising, through dint of talent and persistence, to the very pinnacle of stardom. It’s a cliché because it was ground into dust by a legion of stage and movie musicals and melodramas — but it’s also a cliché because every once in a while it actually happened. And one star to whom it happened was screen and radio favorite Alice Faye.

She was a glamorous blonde siren in the movies, she was a sardonic ex-movie-star turned housewife on the air, but in the beginning she was just Alice Jeane Leppert.  The tough working-class kid from New York’s notorious Hell’s Kitchen knew what she wanted and what she had to do to get it.  Born in 1915, the daughter of a German-American cop and a hard-working Irish mother, little Alice realized early on that you didn’t get anything out of life if you let anyone push you around. What she wanted to do was sing and dance and, without the benefit of formal training, she attained sufficient skill in doing so that at the age of 13 she bluffed her way into a job with a touring kiddie vaudeville act.

That was just the beginning. She wasn’t interested in a life of tank-town touring, and had her eyes on the Big Show. Young Alice haunted Broadway tryouts, facing constant rejection for her age.  But at the age of sixteen she managed to convince producer George White that she was old enough, mature enough, and talented enough for a spot in the chorus of his famous revue. This was the springboard — but it was up to Alice to make the jump.

She left “Leppert” behind when she joined the cast of George White’s Scandals that summer, adopting the shorter, snappier “Alice Faye” as her stage name. The show was the usual grab bag of musical numbers and comedy sketches, boasting a star-studded cast headed by comedy favorites Willie and Eugene Howard, dancer Ray Bolger, Metropolitan Opera star Everett Marshall, a youthful belter named Ethel Merman, and (in his Broadway debut) radio superstar Rudy Vallee.

Vallee was a man with a wide-roving eye when it came both to talent and women — and something about the young chorine attracted his attention. He observed Alice closely over the course of the show’s run, and was particularly impressed with her rich contralto voice — the female equivalent of the “crooner” voice which had made his own career such a success. When Scandals ended its season, Vallee offered Alice Faye a job with his Connecticut Yankees — and a contract with his personal-management firm.

This was no small offer for a young woman with her eye on the main chance. Vallee’s Thursday night radio program, the Fleischmann’s Yeast Hour, was one of the most prestigious programs on the air.  It adopted a “Palace Theatre of the Air” variety format in 1932 and became an even greater success, combining established stars with rising young talent in a compelling, not-to-be-missed weekly package. But Alice wasn’t to be featured on the program…not yet. Instead, she became an alternate vocalist for Vallee’s personal-appearance shows – in vaudeville and in hotel and restaurant engagements, where Vallee outfitted her in slinky, form-fitting gowns and played her up as a glamour girl. It was only after attracting positive attention for these performances that Vallee finally gave her a shot on his network program. Alice sang two songs a week on the Fleischmann Hour during much of 1933, and critics fell in love with both her voice and her style. Vallee himself was equally impressed — on both a professional and personal level — and inevitably, talk began to circulate. This talk came to the attention of Vallee’s wife, actress Fay Webb.

The Vallee-Webb marriage had never been especially strong, given Vallee’s wandering eye, and as talk of the crooner’s relationship with his young featured vocalist grew gamier, Fay Webb decided she’d had enough. She filed for legal separation in the spring of 1933, and soon after filed for separate maintenance, accusing her husband of an adulterous relationship with one Alice Faye. Alice herself publicly denied the charges, and Vallee countered by producing recordings from a tapped telephone documenting his wife’s own dalliances with an “acrobatic dancer.”  The resulting scandal, one of the ripest of the Thirties, mucked its way through gossip columns for months.

During this time, Vallee left New York for Hollywood to make a film version of George White’s Scandals.  Alice Faye hadn’t gone west with Vallee, but when one of the actresses cast for the film failed to impress, he summoned Alice to the Fox Film studios to take over to the part.

Fox cosmeticians took over, and reupholstered Alice Faye into their own version of MGM’s sultry Jean Harlow — peroxiding her hair, shaving her eyebrows and costuming her in skin-tight dresses. Despite the roiling publicity from the Vallee-Webb scandal, Alice’s performance impressed the Fox bosses sufficiently to earn her a contract with the studio, a contract to be carried over when Fox merged with Darryl F. Zanuck’s Twentieth Century Pictures to form Twentieth Century Fox.

Zanuck was impressed with the twenty-year-old starlet — but Alice was unimpressed with him. She signed a contract with the American Record Corporation, despite Zanuck’s belief that recordings by his stars blunted their box office appeal. She fulfilled the contract, but there would be no further Alice Faye records. Zanuck filed the incident away for further reference in his dealings with the young performer who, clearly, needed to be taught her proper place.

Zanuck took full charge of Alice’s career. He bought out her contract with Vallee, and supervised a revision of her screen image — changing her Harlowesque look to a more accessible, realistic style.  He cast her in a long string of successful musicals, opposite such stars as Jack Haley, Tyrone Power, Don Ameche, and Fox’s reigning box office champ, Shirley Temple. She quickly became one of the most popular female stars on the screen.  In 1937, as this stage of her career neared its peak, she married rising young vocalist Tony Martin.  That marriage didn’t last long, coming to an end in 1940, and her relationship with Zanuck was seldom much better. She chafed at the clause in her contract preventing her from making records, she was annoyed by the studio’s limitation of her radio work, and she wanted greater control over the roles she was given. She well realized she was little more than a meal ticket for her studio, and she was getting tired of it.

Alice married again in 1941, to Jack Benny’s bandleader Phil Harris.  She renegotiated her contract to commit herself to just one picture a year, and took a year off to have her first child.  When she returned to the screen in 1943, she scored the biggest hit of her career with Hello Frisco Hello, in which she introduced the vocal standard “You’ll Never Know.” Other singers had hit records with this number — but because of Zanuck’s no-recording policy, Alice did not. The relationship between star and producer grew ever more tense, and when Zanuck used a Faye film to build up rising starlet Linda Darnell, Alice decided she’d had enough. She walked out of the studio with two pictures left on her contract and said she wouldn’t be back. Zanuck, in turn, swore she’d never work on the screen again. For nearly twenty years, she didn’t — and she didn’t care.

But radio kept Alice Faye at the forefront of the public mind. With Phil Harris, she starred in one of the best-written, best-performed situation comedies to come out of postwar radio..It was clear that she didn’t need to be a movie star to be happy. She and Harris raised two children, lived the good life in Hollywood and Palm Springs, and let her contentment stand as her final nose-thumbing to Darryl F. Zanuck and all he stood for.

Once the children were grown, Alice dabbled in various aspects of show business. She appeared on Broadway, she returned briefly to Fox in 1962 for a small role in the lavish musical State Fair, and did occasional small parts in movies and on television as the mood struck her. She and Harris enjoyed a long, happy marriage, up until Phil’s passing in 1995. She followed three years later, a contented, successful woman who had the satisfaction of a life, and a career, that took her all the way to the top.