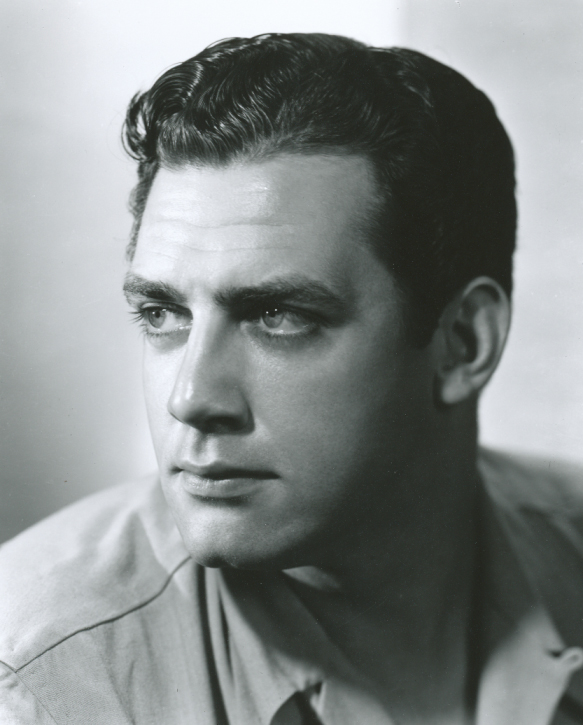 If the thirties were the age of the personality-variety program and the forties marked the golden age of the crime thriller, then the fifties stand out as the golden age of the Adult Western. Not the black hat-white hat kiddie oaters, but serious, grown-up dramas of tension, violence, and the darker side of human nature, set in the harsh and unforgiving world of the late-19th-Century frontier. It was Gunsmoke, the landmark of the genre, that started the trend, and its prime creative movers — producer-director Norman Macdonnell and head writer John Meston — set its standard for quality. It was a standard few approached, with Gunsmoke enduring into the 1960’s as the definitive and, in the end, the final radio western. But, while Macdonnell and Meston might not have topped that accomplishment, they produced another program which, if not the equal of Gunsmoke, is certainly worthy of being mentioned in the same breath — the atmospheric military western Fort Laramie.

The doings of frontier cavalrymen have long been a mainstay of Western fiction, as the guardians of the farthest outposts of the expanding frontier, but they were surprisingly late in coming to radio. Kiddie western heroes such as The Lone Ranger occasionally found themselves dealing with cavalry troopers, but there was no radio program focused entirely on the exploits of the frontier-era Army until 1956, when Macdonnell and Meston followed up on the success of Gunsmoke with a new Sunday afternoon series.

The mid-fifties were an unexpectedly fertile period for radio drama, despite the steady erosion of its audience in the face of television. As affiliate pressure gouged ever deeper into the network schedules, the CBS Radio Network focused more and more on weekend slots for its remaining dramatic features — and, in a brave show of determination not to let radio drama entirely disappear, introduced several new programs. Fort Laramie joined the schedule in January of 1956, as a variation on the Gunsmoke theme of rugged men facing the uncertainties of violent, unpredictable times. But Matt Dillon, as a U.S. Marshal, was a lone agent of authority. At Fort Laramie, his counterpart, Captain Lee Quince, though no less steely and authoritative, had the backing of an entire troop of equally determined men in dealing with the threats facing his remote Wyoming outpost. But, Quince also held the lives of those men in his hands.

Quince was a complex character — in his own way as much so as the tormented Matt Dillon. To portray this figure, Macdonnell and Meston turned to a brooding young actor who had gained notice as a dark, noirish villain in various films of the postwar era. Raymond Burr broke into show business on the stage in the last few years before World War II, and turned to film after the war — the sort of reliable contract actor who could turn in a dependable performance in whatever role was required. Radio and television also beckoned, with Burr gaining valuable microphone experience alongside Jack Webb on Pat Novak for Hire, Dragnet, and Pete Kelly’s Blues. He also supported Frank Sinatra in the adventures of Rocky Fortune. He first came to Norman Macdonnell’s attention in 1951, starring in a particularly hell-for-leather episode of Escape. While actor and director went their separate ways after that performance, Macdonnell remembered the intense young performer.

Burr was not, however, Macdonnell’s first choice for the role of Captain Quince. The audition program for Fort Laramie cast the director’s favorite actor, John Dehner, in the lead role. Dehner was perhaps the busiest member of the CBS stock company at that particular time, turning up again and again in every dramatic program then in production, and at the last minute he dropped out of the series. The lead role went instead to Raymond Burr, who brought the perfect note of icy earnestness to the part. Quince was a career soldier, a man of honor and integrity — but, he also knew that the formalities of rules and regulations didn’t always go on the frontier, and that certain moral ambiguities could not be allowed to distract him, or his men, from the accomplishment of their mission. Quince had to deal with a wide range of challenges in the course of his duty, from maintaining a delicate balance in his dealings with local Indian tribes and the settlers pushing ever outward along the Oregon Trail, to maintaining firm but compassionate discipline over the men under his command.

The Captain’s chief sounding board, his “Chester,” if you will, was (in the tradition of military dramas down through the ages) an inexperienced young officer whose enthusiasm sometimes overcame his common sense. The second-in-command, Lieutenant Siberts, was played by Harry Bartell. A fixture in the network’s various anthology dramas, Fort Laramie gave Bartell a rare chance to develop a continuing characterization, and he brought the role to vigorous life. Siberts was competent-but-green — though it seemed clear that, under Quince’s guidance, he would outgrow his shortcomings to develop into a fine officer. Other key members of the regular cast were Vic Perrin as Quince’s grizzled top Sergeant, maintaining the key link between the commanding officer and his troops, and Jack Moyles as Quince’s superior officer, Major Daggett. CBS regular Sam Edwards filled many rank-and-file roles in the troop, most frequently appearing as the reliable Trooper Harrison.

John Meston established the style for the series from the beginning — this would be no routine “Cowboy and Indian” show, exaggerating the perils of frontier life while steeping its characters in melodrama. Fort Laramie was set in a very specific time and place — the late 1860’s, at the edge of Wyoming Territory. Meston and his fellow scriptwriters took careful notice of historical facts and worked to make their episodes as accurate to the reality of the times as possible. It was an approach that characterized CBS’s entire line of 1950’s westerns, but Fort Laramie, based as it was on a specific real-life location, maintained the most rigorous commitment to an honest portrayal of frontier life. Such outstanding scriptwriters as John Dunkel, Les Crutchfield, and Kathleen Hite — all of them longtime Macdonnell-Meston collaborators — carried forward the themes of the series with careful attention to detail and a strong emphasis on realistic characterizations. Plots focused on both the tensions and the drudgery of frontier military life, as well as on the parade of civilians passing through the fort: naive settlers, proud Indians, scheming outlaws, the flotsam and jetsam of pioneer America carried westward by the country’s momentous growth. Quince and his men stood as protectors, as doorkeepers, and as mediators as the situation demanded. Sometimes they succeeded in their efforts, and sometimes they fell short – but, the stories of how they did it were always well and carefully told.

Maintaining the family ties to Gunsmoke were the program’s supporting cast and technical crew, many of who crossed over to the senior program. The sound effects — or “sound patterns,” in CBS patois — were particularly fine, with technicians Ray Kemper and Bill James creating a rich frontier soundscape that underscored the drama without ever, as is often the case in modern “audio theatre” productions, overwhelming it. Kemper and James, working closely with Macdonnell and the writing staff, understood the importance of realistic background sound — but they also, just as importantly, understood the importance of silent stillness.

With such an impressive pedigree, one would have expected a longer run for “Fort Laramie.” But Raymond Burr’s career took him in another direction — in the summer of 1956, as the series was wrapping up its first season, the actor was author Erle Stanley Gardner’s top choice to bring crusading defense attorney Perry Mason to television. Although CBS insisted it remained committed to radio drama, any actor offered a plum television role couldn’t help but make the jump — and for Burr, it was a decision that would define the rest of his life. He would play Mason for nearly a decade on TV, and would reprise the role again in a long series of TV movies in the 1980s and 1990s. It remains the role for which he will always be known — while his outstanding performance as Captain Lee Quince receded into obscurity. “Fort Laramie” was dropped from the CBS schedule at the end of its first season, and Macdonnell and Meston remained focused on their Gunsmoke franchise. But “Fort Laramie” didn’t disappear entirely — it enjoyed decades’ worth of reruns courtesy of the Armed Forces Radio and Television Service, and remains today a worth sampling of the adult western done at its best.