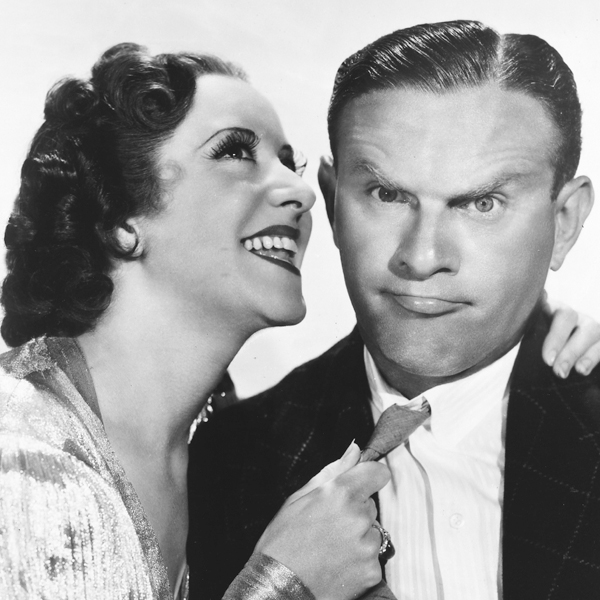 Long-term success in radio meant finding a formula that worked — and sticking with it. Once a performer established an attractive personality and a familiar format, it was natural to expect that format to go on and on and on and on, for as long as the listeners kept tuning in. For most of the big names in broadcasting, that formula set in relatively early in their careers and remained in place, with only minor evolution, for as long as they remained on the air. But there were exceptions. Some performers, some personalities found it necessary to reinvent their approach mid-career. And none did so more successfully than George Burns and Gracie Allen.

Reinvention was nothing unusual for George Burns. The first twenty years of his show-business career were marked by a constant stream of new approaches, new strategies, new attempts to find a style that could take him out of the smalltime, away from the upper berths, the flea-pit theaters, the rowdy audiences, and the five-a-day shows, and into the rarefied atmosphere of top-echelon vaudeville. When song-and-dance men were a dime a dozen, he became a talking comic. When monologists were a glut on the market, he became part of a comedy team. And when his partner started getting all the laughs, he took the hint and became a professional straight man.  It was a role that suited him, with his lean frame, his sharp visage, his gravel voice, and his immaculate sense of comic timing. And the role of comic was a perfect fit for his partner.

Gracie Allen looked the part of the pert young Irish dancer she’d been when she sidled her way into show business in the years before the First World War. She grew up on the stage, and was a seasoned show-business professional when she teamed with Burns in 1922, in a conventional song-and-dance-and-light-comedy act. Audiences liked Gracie, liked her fresh-faced, open way with a line, to the point where her straight lines drew more laughs than George’s gags. Burns was a canny enough performer to recognize her appeal, and switched the act around to make her the comic — and from there, Burns and Allen took off.

“Boy and Girl acts,” or “park bench acts” were among the most common features on the vaudeville stage. They were inexpensive, they could be performed in front of the curtain — allowing time for stagehands to set up scenery for more elaborate acts — and they had a foolproof formula. As long as the performers were likable and at least moderately talented, they were guaranteed to entertain with their mix of songs, soft-shoe dancing, and comic dialogue. Park Bench routines were also a common theme for married vaudeville couples – which Burns and Allen became in 1926 — but it was very rare for a married stage couple to present themselves as such. The appeal of Park Bench comedy depended on a certain youthful flirtatiousness, a no-strings-attached sensibility that fell apart if the audience accepted the performers as married. Thus, while Burns and Allen made no secret of their marriage offstage, on stage they were never more than simply Boy and Girl.

And so they were on radio as well. The performers made their on air debut while on tour in Great Britain in 1930, and became stateside stars the following year, just as a wave of Broadway and vaudeville veterans were turning to broadcasting as far more profitable and far more stable than the Depression-wracked stage. Burns and Allen were tailor-made for the brisk comedy-paired-with-popular-orchestra format that emerged in the early thirties as a broadcasting favorite. This radio format closely followed their stage format, and served them well through the 1930s. But while Burns and Allen were successful radio performers, they weren’t among broadcasting’s top stars — and unlike their old friend Jack Benny, they seemed unable to hold a sponsor for more than a couple of years. Over their first decade on the air they bounced from General Cigar to Campbell Soup to Liggett and Myers to General Foods to Lehn and Fink to Hormel Packing, and back and forth from CBS to NBC to suit the wishes of each new sponsor. And with each new sponsor, each new network, each new time slot came a slow but steady erosion in their audience.

George Burns knew that something was wrong. As ratings declined, he thought long and hard about the Burns and Allen act. In 1941, George Burns was forty-five years old. “George is so old…” jokes had already found their way into the program, which didn’t help listeners to visualize the performer as a flirtatious park-bench character. Gracie Allen, depending on who you believed, was anywhere from thirty-five to forty-six years old, and while her voice was still that of a chirping innocent, listeners knew from fan-magazine profiles that she was a married woman with two adopted children.  It ill became her to flirt and caper on the air each week with announcers, tenors, and assorted guest stars, to say nothing of doing a park bench act with George. The Burnses were middle-aged, but doing material suitable for performers twenty years their junior. Attempts were made to modify the formula with situation-oriented humor – their 1940 series featured the “Gracie Allen for President” campaign, and the 1941 Hormel series leaned heavily toward situation-based sketches. But Burns and the writers knew these changes were just patches on a tired routine – and that a more drastic adjustment was needed.

Lever Brothers Company picked up Burns and Allen for a new series starting in the fall of 1941 — and “The New Burns And Allen Show” was exactly that. George and his writers emerged from their brainstorming sessions with an entirely new flavor for the program. Gone was the variety-show format, gone was the casual flirting around the microphone, gone were the “wacky” sketches — and in their place came straight situation comedy. George and Gracie presented themselves as a show-business married couple, living in Beverly Hills, dealing with the routine of daily life. Gracie was still Gracie, but in a new domesticated guise. Now she confused and perplexed her neighbors, her hairdresser and store clerks along with her show-business colleagues. Supporting characters like neighbor Tootsie Sagwell and Mel Blanc’s blubbering “Happy Postman” cropped up to fill cracks in the new format. And Burns and Allen, at last, attained reasonable stability on the air. They stuck with Lever for four successful seasons, and then went back to General Foods, whose sponsorship would last nearly to the decade’s end.

Burns and Allen had one more radio season left after that, but their real future lay in television. The situation comedy format was perfectly suited for TV, and of all radio performers transitioning to the new medium at the turn of the fifties, George and Gracie enjoyed the greatest and most consistent success. Burns tweaked the format slightly to adapt it for video, casting himself as an omniscient narrator, leaning against the proscenium smoking his cigar as he commented sardonically on the doings of his wife. And there was even a place on television for an occasional reprise of the old park-bench Burns and Allen, as George and Gracie took time every now and then to add one of their old stage bits at the tag of an episode. Here the routines were presented as nostalgia, the televised equivalent of sitting on the couch with the old family album, and the audience was perfectly happy to accept them as such.

Burns and Allen survived into the late 1950s by adapting to the times more successfully than any other radio act. They no longer had any need to fear the passing years, because they had come to understand that time could work with them, not against them. Far from being locked down into a specific format, or a specific comic approach, George Burns understood that the only unchangeable aspect to the act was Gracie herself — the eternal innocent with a logic all her own, dropped into a world incapable of seeing the world as she saw it. As long as they didn’t tamper with that essential root of Gracie’s stage persona, nothing else in the act was fixed.

The program could have easily continued into the 1960s, had Gracie not decided in 1957 that it was finally time to retire. But George Burns himself continued to change with the times, eventually remaking himself into the Grand Old Man of Show Business, a living monument to vaudeville, radio, and early television, still performing into the 1990s. The Burns and Allen “mid-life crisis” turned out to be the best thing that ever happened to their career.